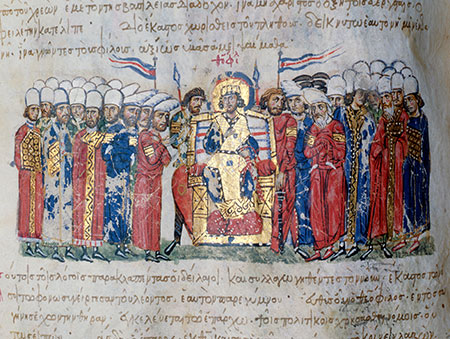 The last iconoclast emperor was just 28 when he died of dysentery, still embroiled in the conflict with the Abbasid Caliphate that had dominated his reign. With Theophilus, so too died the strict ban on the veneration of icons that had been a feature of Byzantine society on and off for 116 years.

Theophilus’ father Michael II was a soldier from Amorium in Phrygia, western Anatolia. Michael and his colleague Leo V ‘the Armenian’ had together overthrown Michael I Rangabe (811-13), with Leo becoming emperor. When their relationship soured, Leo sentenced his former ally Michael to death. Michael in turn conspired to have Leo assassinated, succeeding in 820, and became emperor himself. Born in 813, Theophilus, Michael’s only son, was made co-emperor in 821 and ruled outright after his father’s death on October 2nd, 829. Among his first acts was the execution of his father’s co-conspirators against Leo, a decision that helped ensure his reputation as a champion of justice. In Timarion, a satirical dialogue written anonymously in the 12th century, Theophilus appears alongside the mythical kings Aeacus and Minos as one of the three judges in Hades who acquit the eponymous protagonist.

The Byzantine Empire had long been subjected to attacks at its borders, from Vandals, Goths, Persians and, finally, Ottoman Turks. Theophilus constructed northern fortresses as defences against Vikings and Magyars, but the biggest threat he faced was the Abbasid Caliphate, which had overthrown the Umayyad Caliphate in 750. Constantinople had previously come to blows with the Muslim Arabs. It had withstood a siege from 674 to 678, when a peace treaty was signed with the Umayyad Caliphate. In 698 Arab forces ended Byzantine rule in North Africa with the capture of Carthage and, by 711, had conquered much of Spain. After the volcanic eruption that occurred on the Greek island of Thera in 726, the success of the Muslims was seen increasingly as a sign of Byzantium’s loss of divine favour. The Muslim conquerors forbade the sort of figurative art that decorated much of Constantinople and adorned its currency. In the late seventh century the caliphal authorities had denounced the veneration and dissimulation of images and icons as being in breach of the Second Commandment. Support for this within the Empire led to the ‘First Iconoclasm’, banning the making or worshipping of icons, which was instigated by Leo III in 726. Inheriting his father’s diluted version of iconoclasm, Theophilus issued an edict in 832 prohibiting every display of image-worship and forbidding the use of the word ‘holy’ before the names of saints. The edict was enforced with severity, with many iconophiles subjected to torture.

So strongly did Theophilus adhere to iconoclasm that his military defeats were taken as a sign of its folly. Theophilus personally led the army against the Caliph Al-Ma’mun, who was expanding into Anatolia. In 831 victory in Cilicia was followed by defeat in Cappadocia and peace was agreed following Al-Ma’mum’s death in 833. Relations deteriorated when Al-Ma’mum’s successor, Al-Mu’tasim, campaigned in Asia Minor, defeating Theophilus at the Battle of Anzen in 838. The Abbasid army then marched on towards Amorium, the birthplace of Theophilus’ father Michael, and the city fell after a 55-day siege. The fall of Amorium was a severe blow to Theophilus’ reputation as a military leader and shook his faith in the power of iconoclasm. Thenceforth, he sought practical explanations for failure. An ability to learn from mistakes as well as his patronage of scholarship (notably Leo the Mathematician, on whom he conferred a school) were considered among Theophilus’ strengths as a ruler.

In 840, with his health failing, Theophilus decided to combat the Arabs in Sicily, where they had established an emirate in 831. This was to occupy the last years of his life and he sought assistance from the Frankish king, Theodosius Babutzicus. Theodosius agreed to help, but Theophilus was dead before Frankish support could arrive. The official cause was dysentery, possibly connected to pagophagia, brought on by the excessive consumption of snow or ice in order to relieve the symptoms of gastric inflammation. He was survived by his wife, Theodora, who soon revealed herself to be an iconophile. She became regent to Theophilus’ successor, his son Michael III ‘the Drunkard’, who, despite his dubious epithet, saw the abolition of iconoclasm and a revival of Byzantine military power. With Michael’s success, Theophilus’ reputation suffered. His strict clamp down on the veneration of icons, it was thought, had held the Empire back. 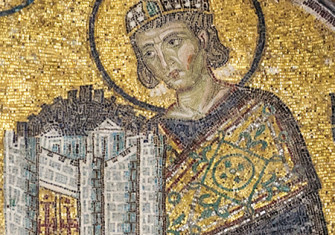