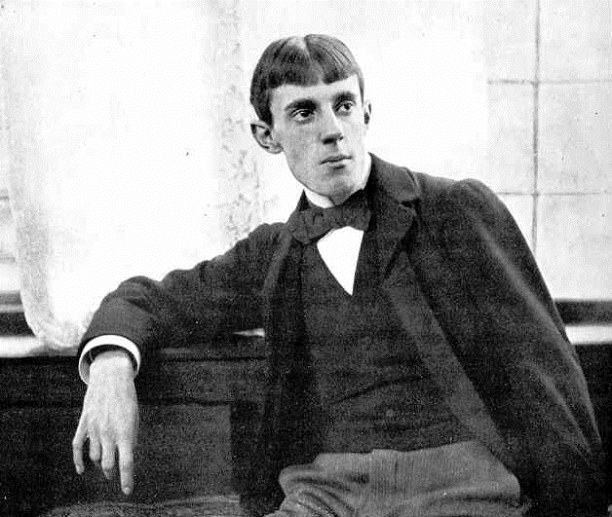 The most brilliant illustrator of his day and, with Oscar Wilde, the outstanding figure of the 1890s 'decadence', Aubrey Vincent Beardsley died, aged only twenty-five, very early in the morning of March 16th, 1898, in his room at the Cosmopolitan Hotel in the Riviera seaside resort of Menton. His mother and sister Mabel were with him. He had been received into the Roman Catholic Church a year earlier and died quietly with his rosary in his fingers. After a requiem mass in the cathedral the next day, a procession of almost everyone in the hotel attended the coffin under a clear blue sky to the town's hillside cemetery.

Beardsley had lived most of his short life in the shadow of death and in a tearing artistic hurry. He was born in Brighton, where the house on the corner of Buckingham Road and West Hill Place bears a plaque. His father was a consumptive. His mother, Ellen Pitt of a Brighton medical family, was known because of her extreme slenderless as 'the bottomless Pitt'. She worked as a music teacher, while her husband took minor clerking jobs. Mabel was born in 1871 and Aubrey a year later, and he first showed ominous signs of consumption as a small boy. He went to Brighton Grammar School and started work as a clerk in London when he was fifteen.

In 1891, Aubrey and Mabel went uninvited to call on Edward Burne-Jones in West Kensington and the great man was deeply impressed by the portfolio of drawings which the eighteen-year old Aubrey just happened to have with him. The Beardsleys also met Wilde and his wife, who were there for tea that day, and with Burne-Jones' encouragement, Aubrey started evening classes at the Westminster School of Art – the only professional training he ever received – and set out to be a professional artist. His work appeared in the 'Studio' and 'Savoy' magazines and he illustrated a new edition of Malory's Morte d'Arthur for the Bodley Head. His illustrations to the English translation of Wilde's Salome made his name on the Continent, where he was to be an influence on Picasso, Klee and Kandinsky. As one of the founders of Art Nouveau, he was also a powerful influence on decorative artists. His theatre posters and book covers made him one of the pioneers of advertising art and he believed that a poster could perfectly well be a work of art and a hoarding a perfectly good place to display art, especially as no one had to pay to see it.

Beardsley was art editor of the 'Yellow Book' until dismissed in 1895 in the scandal that brought Wilde down, though he was not involved in Wilde's homosexual escapades and his biographer, Brigid Brophy, thought his own sexual inclinations were 'probably for the most part heterosexual'. With his big, beaky nose and monkish haircut, sunken eyes, high brow and stooped, emaciated figure, Beardsley was immensely well-read, dandified and a master of camp, but almost nothing is known about his private life. He was sociable, but solitary, and his mother and sister seem to have been the two people closest to him. He hated anyone to watch him work and did his drawings by candlelight with the door locked and the curtains drawn. Knowing that he almost certainly had little time to live, he produced a huge quantity of art in his career of five years, despite periods when he was too ill to work at all. The eroticism of his illustrations profoundly shocked conventional middle-class feeling. George Bernard Shaw said that Beardsley had a boyish taste for posing as a reveller in vices of which he was innocent, but Kenneth Clark, who noted that Beardsley had been 'a kind of catmint to adolescents' for years, thought him steeped in evil. The Salome drawings, Clark thought, 'exhale an atmosphere of sin compared to which Wilde's writings are quite harmless'.

In 1897 tuberculosis drove Beardsley abroad to France, with his mother in attendance, and to Menton in November for refuge from the winter cold. He described the town in his letters to Mabel as 'quite delicious marvellous sunshine and perfect air' and he liked to sit in sheltered spots and look out over the Mediterranean. After an attack late in January, however, he was never again to leave his hotel room alive and a violent haemorrhage on March 6th foreshadowed the end.