From This Day Forth

Amanda Foreman tells the story of the Stuart courtier, Frances, Countess of Essex. 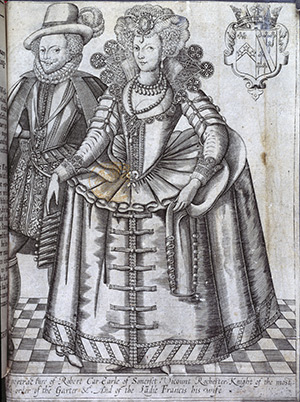 After Henry VIII married Anne Boleyn in 1532 there was precisely one divorce in England. This was granted to the Marquis of Northampton in 1551. There would not be another until 1670. While the rest of Protestant Europe began to embrace the idea that there could be justifiable reasons for ending a marriage, England made a lurch backwards. Not only did the new Church of England come out against divorce under any circumstances, it also far outstripped Catholic Europe in the restrictions that were placed on granting annulments. Out went the liberal consanguinity rules of cousinhood and the catch-all clause of prior contract, which were so helpful for couples seeking to part. The Church of England’s grip on marriage was so strong that the only route to a divorce was via an act of Parliament – a law voted through by both Houses. When a divorce law was finally enacted in 1857 the number of divorces in English history stood at a mere 329.

The paucity of options available to women did not mean that they simply stopped trying. The grounds for annulment included inability to consummate the marriage. The sheer ordeal of providing proof  – the wife was always subjected to physical examinations of the most intrusive kind – was enough to deter most women. But in 1561 Willmott Bury of Devon requested an annulment on the grounds that her husband, John, was physically incapable of consummating the marriage. The examining midwives agreed that Mrs Bury was a virgin and a physician testified that a kick from a horse had left Mr Bury with just one testicle, now the size of a tiny bean. The court duly granted an annulment. Unfortunately, on his release from Wilmott, John married again and fathered a son. Matters came to a head when the next-in-line to inherit Bury’s estate challenged the validity of the annulment and tried to have the son proclaimed illegitimate. The suit ultimately failed.

The embarrassment caused by the Bury case led to a far stricter interpretation of the rules, including the new stipulation that, if an ex-husband suddenly ‘found’ his potency, the annulment became invalid. Nevertheless in 1613 Frances, Countess of Essex, and her family cited impotency in their nullity suit against the Earl of Essex. As the countess’s father put it, ‘the earl had no ink in his pen’. Essex did not dispute the fact that the marriage had never been consummated. But, eager to avoid dishonour and humiliation, he claimed that the difficulty was only with Frances.

None of the earl’s friends had ever known him to mention a woman, or to spend time in female company. On the other hand, the marriage had been arranged and the couple disliked one another from the start. It took a certain kind of man to ignore the fact his wife found him repulsive. Society did not know what to make of the case. Meanwhile, Frances had fallen in love with James I’s favourite, the Earl of Somerset. She was desperate to marry him and prepared to do anything to win her case.

A solution presented itself in the form of an obscure pronouncement by the 12th-century saint, Thomas Aquinas. According to Aquinas, a man could be rendered temporarily impotent by witchcraft. The Earl of Essex, claimed Frances’s lawyers, had been the victim of malevolence by persons unknown. An annulment was therefore possible with all honour intact.

Few were taken in by the Aquinas argument and certainly not the Archbishop of Canterbury, who headed the panel of ten judges. But Frances and Somerset had a powerful ally in the king. The suit was granted by a majority and the couple were married.

But this was not the end of the story. Two years later Frances was accused of having poisoned Sir Thomas Overbury, one of the loudest critics of the annulment, who had died just ten days before the court decision. Behind the obvious scandal lay a possible conspiracy that reached all the way to the throne. Frances was arrested and pleaded guilty to attempted murder. The disgraced couple were permanently banished to the country. Having wriggled out of one marriage, this time Frances was out of luck. The Somersets lived out their days in mutual bitterness and recrimination.

Amanda Foreman is the author of A World On Fire: an Epic History of Two Nations Divided (Allen Lane, 2010).