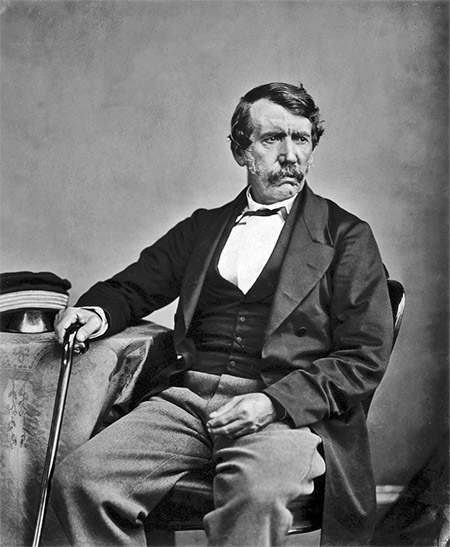 In 1853, the missionary-explorer had set out from Linyanti, in what is now Namibia, and headed north up the Zambezi and then north-west to find a route to the Atlantic coast which he hoped would open the way for Western trade and Christianity to penetrate to the heart of the continent.

At the end of May 1854 he and his small escort of Makololo, war-like tribesmen  of the Linyanti area, reached the coast at Luanda in Angola, a port heavily involved in the slave trade which Livingstone detested.

The journey had severely taxed the fever-stricken explorer’s health, but he could not abandon his men so far from home and they set out on the return to Linyanti in September. The kindly local Portuguese Catholic bishop had provided the Makololo with new clothes in blue and red as well as cotton caps and blankets, and the crew of a British cruiser in the harbour gave Livingstone a sturdy canvas tent.

The party took virtually a year to get back to Linyanti, where there was an excited gathering to hear Livingstone’s companions’ account of their adventures. From there at the beginning of November when the weather began to cool – it was 108°F in the shade in Linyanti in October – Livingstone started east along the Zambezi in a fleet of canoes on his way to the Mozambique coast at Quelimane, accompanied by the young Makololo chief Sekeletu and some two hundred men. Presently they began to hear the distant roaring of the Mosioatunya Falls, one of the world’s most astonishing spectacles, on what is now the border between Zimbabwe and Zambia. From six miles or so away they could see columns of spray rising to the sky.

The falls are twice the size of Niagara. At a point where the Zambezi is 5,000ft (1,700m) across, it tumbles down a sheer precipice 355ft (108m) high at a rate of 33,000 cubic ft (935 cubic m) per second. The vivid Makololo name meant ‘The Thundering Smoke’, for the river makes an immense roaring sound and the spray forms a veil of mist.

Livingstone’s men sailed his canoe to one of the small islands on the lip of the falls. It seemed as if they were going right to the edge and Livingstone felt distinctly uneasy, but recorded in his journal that ‘I said nothing, believing I could face a difficulty as well as my guides’. Landing on the island, he lay on his stomach on the lip of the falls and looked down into the seething cauldron beneath him, getting drenched to the skin in the mist, in which he could see rainbows. ‘On the left side of the island we have a good view of the mass of water... as it leaps quite clear of the rock, and forms a thick unbroken fleece all the way to the bottom. Its whiteness gave the idea of snow, a sight I had not seen for many a day.’ He cut his initials and the date in the bark of a tree on the island, ‘the only time I have been guilty of this act of vandalism’. He later re-christened ‘the most wonderful sight I had seen in Africa’ in honour of Queen Victoria.  His statue gazes over the falls today.