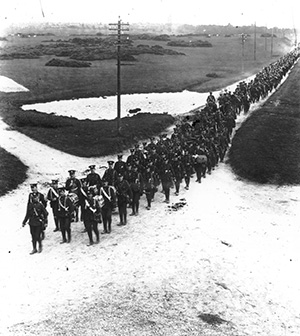 In the early years of the 20th century Ireland seemed to be moving towards civil war. Nationalists in the mainly Roman Catholic areas of most of the country were demanding more independence from Great Britain, while Protestants in the north, in Ulster, threatened violent resistance if the demand was granted. In 1912 the Liberal party government at Westminster, which depended on Irish MPs in the House of Commons to stay in power, brought in a Home Rule bill that would have allowed the creation of a parliament in Dublin to control Irish internal matters, while foreign affairs remained in Westminster’s hands. It was denounced as inadequate by Sinn Fein, the Irish nationalist organisation which wanted total independence, while Ulster Protestants, led by Edward Carson, signed a Solemn League and Covenant refusing ever to submit to an all-Irish parliament.

The Home Rule bill passed the House of Commons, but was rejected by the House of Lords. In 1913 the bill again passed the Commons and was again rejected by the Lords. The Ulster Protestants now created the Ulster Volunteer Force, which recruited thousands of men ready to fight, while Sinn Fein and other nationalist groups reacted by forming their own army, the Irish (or National) Volunteers. Both sides obtained arms from Germany, which saw political advantage in meddling.

Constitutionally, the Lords would not be able to reject the Home Rule bill for a third time when it came up again in 1914, but the Liberal government in London was worried about the attitude of British troops in Ireland if they were ordered to put down a rising in Ulster. The prime minister, H.H. Asquith, set up a Cabinet committee ‘to look into the matter in all its aspects’. It included Jack Seely, the secretary of state for war, Augustine Birrell, who was chief secretary for Ireland, and Winston Churchill as First Lord of the Admiralty. The liberal grandee Austen Chamberlain said that all the politicians wanted a settlement, but had no clear idea what to do.

The details of what happened are uncertain because different accounts were given by those involved, but Westminster feared that the Ulster Unionists might invade southern Ireland and General Sir Arthur Paget, commander-in-chief in Ireland, was ordered to make preparations to prevent them. On March 20th, without written orders from London (perhaps because the politicians did not want to put anything in writing), Paget informed his senior officers in Ireland that action against Ulster was imminent. He said that officers who had homes in Ulster would be allowed to ‘disappear’ temporarily, but that any other officers who were not ready to obey orders against the Ulstermen were to say so and would not be allowed to resign but would be dismissed from the service immediately.

The British army’s principal base in Ireland was the Curragh Camp in County Kildare, not far from Dublin, where two cavalry units, the 5th and 16th Lancers, were stationed. On Paget’s instructions the officers there were sounded out and Paget reported to the War Office in London that almost all of the 5th Lancers officers had said they would instantly resign if ordered to act against the Ulster Volunteers and he feared that the same thing would happen with the 16th Lancers. Brigadier-General Hubert Gough, the commander of the cavalry brigade, had indicated that he would do the same.

The news created a sensation in the press, which reported ‘an Astounding Action’ and ‘an Arrogant Claim to Disobey Orders’ in ‘a Curragh conspiracy’. The authorities in London back-tracked at high speed. Asquith told the public that there had been ‘an honest misunderstanding’ and that the government had never intended to take punitive action against the Ulster Volunteer Force. The War Office announced that there was no intention of using the army to enforce the Home Rule bill.

The Curragh Incident is often called a mutiny or a proto-mutiny, as the dissenting officers had clearly stated that they would disobey orders, though they had not actually disobeyed any because no orders had been issued. The episode heartened the Ulster Unionists while reinforcing nationalist doubts of Westminster’s appetite for Irish self-rule.

On May 25th the Home Rule bill passed the Commons again, but in June the government amended it to allow the temporary exclusion of Ulster for six years. At the end of July the First World War broke out. George V gave his reluctant assent to the Home Rule bill in September, but it was put in suspense for the duration of the war. Thousands of men from all over Ireland fought for Great Britain in the war and it was not until long after it was over that the Irish Question would finally be settled.