Not to be Trifled With

A public spat between a historian and a writer shows why some subject matter deserves special reverence, says Tim Stanley. 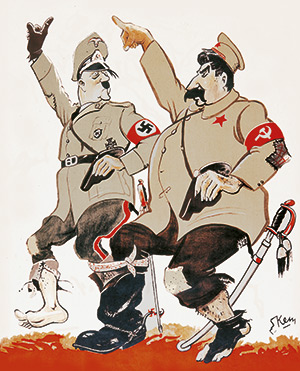 There is a war of words being waged between historian Richard Evans and writer A.N. Wilson. Evans, Regius Professor of Modern History at Cambridge, dislikes Wilson’s latest book, Hitler: A Short Biography. He complains that Wilson relies exclusively on English language sources and that the book brings nothing new to the subject except purple prose and trite psychology. Evans opines that, while he accepts non-academic writers have brought fresh insight into the dictator’s life, he can find ‘no evidence of that here, neither in the stale, unoriginal material, nor in the banal and cliché-ridden historical judgements, nor in the lame, tired narrative style; just evidence of the repellent arrogance of a man who thinks that because he is a celebrated novelist, he can write a book about Hitler that people should read’.

Wilson does concede that his book contains ‘a few howlers’ of a factual nature, but insists that Evans’ ‘spiteful review’ was unjustified. In an open letter of reply Wilson concludes: ‘All is joy. The war is over. Hitler is dead. Get a life, poor Evans. There is no need to be so cross.’

Why is Evans so cross? In Wilson’s defence he has produced excellent history before; his book on Victorian Britain is required reading in some universities. Also, his Hitler biography is actually rather good. The writer is brilliant at cutting through the melodrama of Nazi history to the sad banality of the man at its centre, at once humanising him and making it all the more frightening that he gained so much power over so many lives. In Wilson’s account Hitler is a lazy mediocrity who suffered from eczema and bouts of wind. He appealed to the Germans because he was both extraordinarily articulate yet very ordinary in his background and political grievances. Wilson closes with a compelling argument that Nazism was the product of the early 20th century’s obsession with Darwinism. Anyone doubting that there was something universal about the Nazi desire to purify the race should look to the sterilisation of ‘loose women’ in the United States and of homosexuals in Holland.

So why, if it is so imaginative and well written, has Wilson’s book caused such controversy? The answer has to be its subject matter. The West perceives Hitler as so evil that he can only be approached from the perspective of careful academic study, which must be grounded in years of detached, painstaking research that proves the author has taken the madman as seriously as possible. Wilson’s slimmer, quicker approach smacks of the gadfly.

We have been here before. In 2002 Martin Amis published a history of the Stalinist Terror under the title Koba the Dread: Laughter and the Twenty Million. Why laughter? Because Amis was reflecting on an incident in which he saw his friend Christopher Hitchens discuss the Bolshevik revolution with such bonhomie that he actually laughed. How could something that cost an estimated 20 million lives produce fond laughter? And how could a brilliant man like Hitchens still defend the Soviet Union as a noble experiment?

The problem with Amis’ book is that, even though it purported to be about Stalin’s victims, it was really about Martin Amis. He wanted to understand why his friends and his father, the novelist Kingsley Amis, had once been enthralled by Communism. It is a good question, but weighed up against the slaughter of millions of people the emotional focus on Amis’ family politics was inappropriate. Perhaps if Amis had addressed the matter with a more abstract appraisal of the failings of Communism he might have succeeded. But Stalin is a monster and deserves an approach that is a mix of the epic and the microscopic, not the personal.

The same goes for Hitler. The Second World War and the Holocaust were such terrible events that in the minds of many they have become almost religious experiences. Wilson’s interesting volume is thus too short to reassure historians like Evans that he has proper veneration for the subject. May other novelists heed his warning. If they want to write about Hitler, Stalin, Mao or Pol Pot, get stuck into the sources, write over 500 pages and take at least ten years to do it.