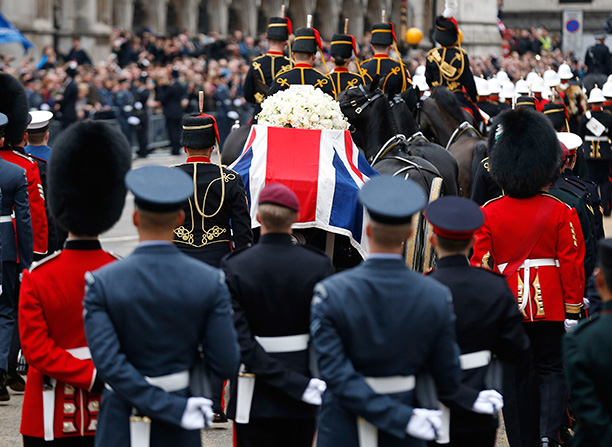 The funeral of Margaret Thatcher was a fine example of the construction of history. Not only did it reflect on Britain’s recent past, but it also helped us place current events in a historical framework, creating a story from which we can piece together our present identity. ‘Thatcher fixed Britain’, said the right-wing mourners, ‘and we must replicate her policies today to save it from recession.’ ‘On the contrary’, cried the left-wing protestors. ‘Thatcher broke Britain and David Cameron is repeating her mistakes.’ Neither group was 100 per cent accurate, but when it comes to inventing national myths the facts are less important than the themes.

The assumption on both sides was that one individual could be held accountable for everything that happened in the 1980s. The Right credited Thatcher with rescuing the British economy from socialist stagflation. They forgot that she was helped by the revenues of North Sea oil and that Britain only really discovered stability and prosperity after she quit office: unemployment was higher when she left Number 10 than when she entered it. Likewise, the Left blamed her for the decline of Britain’s old industrial economy and the decay of community. It slipped their minds that nearly four times as many coal mines closed under Harold Wilson’s Labour governments as under hers, or that crime started to rise in the 1960s rather than the 1980s.

Moreover, Right and Left described Thatcher’s years in office as if they were of one tone, be it uncompromising conviction or brutal narrow-mindedness. Yet anyone writing Thatcher’s biography in 1981 would encounter a prime minister who had caved in to a threatened miner’s strike; in 1982 as an unpopular leader placed third in the polls; in 1983 as a war hero who united the nation; in 1986 as the creator of a booming economy; and in 1990 as a poll tax fanatic, who lost office thanks to her own arrogance. Pragmatist, ideologue, job creator, job destroyer: Thatcher was all these things and more. Yet her funeral treated her character and spirit as though they were consistent and timeless – the stuff of myth rather than flesh and blood.

But then that’s what tends to happen at funerals. In 1965 thousands lined the streets of London to bid farewell to Winston Churchill. The unanimous respect shown towards him was captured in the grim silence that accompanied the coffin; even the industrial cranes bowed as he passed by. The Queen sent a message to Churchill’s widow, Clementine, that credited his charismatic wartime leadership: ‘The survival of this country and the sister nations of the Commonwealth in the face of the greatest danger that has ever threatened them, will be a perpetual memorial to his leadership, his vision, and his indomitable courage.’

As with Thatcher and the 1980s, Churchill was popularly understood to embody the national experience of the 1940s. The difference between the two was the lack of political controversy at the time of burial. By 1965 most had forgotten that Churchill’s marginalisation from the Appeasement debate of the 1930s was caused by the terrible strategic mistakes he had made as First Lord of the Admiralty during the First World War. Instead, Churchill was cast as the brilliant saviour of an empire and much of the enthusiasm shown towards his memory might well have had something to do with its subsequent loss. Saying goodbye to Churchill was, for many Britons, saying goodbye to youth and national pride.

Thatcher’s memory was far more divisive, but at her funeral we still witnessed the strange way in which we rewrite a political biography and then use it to tell a story of a nation’s past. Perhaps we were doing what everyone does at funerals: thinking as much about ourselves as the deceased. It is a process that can swing between nostalgia and bitterness and it rarely produces the most accurate biography of the individual we are there to bury.