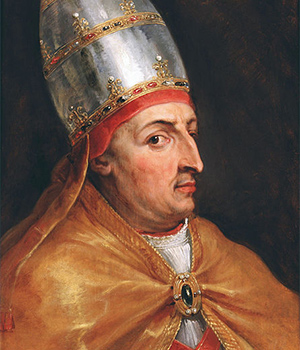 One of the frustrating things about the conflict between religious traditionalists and atheist secularists is that its participants are rarely debating the same thing. Angry atheists such as Richard Dawkins attack a vision of faith that is far removed from theological or historical reality. They lift passages at random from religious texts or take isolated events in the history of religion, present them to the believer and say: ‘How can you worship a God that is so capricious?’ or ‘How can you attend a church that is so cruel?’

The problem is that the historical record is far more nuanced than the professional sceptics make out. Take the Catholic church’s stance on slavery in the New World – often invoked as evidence of its inhumanity. In 1452 Pope Nicholas V issued a papal bull called Dum Diversas that granted Portugal and Spain ‘full and free permission to invade, search out, capture and subjugate unbelievers and enemies of Christ wherever they may be ... And to reduce their persons into perpetual slavery’. This was taken at the time – and still is today – as a fulsome endorsement of the enslavement of the Americas.

A papal bull isn’t necessarily a statement of doctrine as supported by the Catholic catechism. Although it is presupposed to be theologically correct, surprisingly few papal bulls have been identified as examples of papal infallibility. In the case of Dum Diversas what is striking is how it contradicts a lot of other things that Rome had to say about slavery, which Thomas Aquinas regarded as an unmitigated evil.

When the Spanish colonised the Canary Islands in the 1430s Pope Eugene IV issued a papal bull that gave Spanish merchants just 15 days to release everyone they had enslaved or face excommunication. Likewise in the 1530s Pope Paul III issued bulls condemning New World slavery in stark language. Rejecting the claims of the European colonisers that the natives were animals without souls, he wrote in Subliminus Dei (1537): ‘Noting that the Indians themselves indeed are true men … [We] decree and declare by these present letters that the same Indians and all other peoples – even though they are outside the faith … are not to be reduced to slavery.’

If the brutality of New World slavery so painfully contradicted Catholic doctrine why didn’t the church do more to stop it? First, it was staffed by flawed men who sometimes defied rules that they found inconvenient. Pope Innocent VIII (who also fathered a number of illegitimate children) happily accepted a gift of a hundred slaves in 1488. Second, while the medieval church did enjoy a profound spiritual power, its temporal power was never as great as its modern critics assume. In 1527 Rome was sacked by Charles V of Spain and the pope was often the prisoner of coloniser kings. The fragility of church authority was confirmed by the Protestant Reformation.

Therefore, acknowledging the limits of its power, the church tended to accept slavery as a sad reality of the human condition (like war or feudalism) and to focus on ameliorating its worst effects. Hence the church appointed an official Protector of the Indians in the 1610s and it helped write labour codes designed to define the rights of slaves and the responsibilities of their owners. In 17th-century Paraguay the Jesuits established an enormous republic (known as the Jesuit Reduction) wherein indigenous people were free to practise their own culture (so long as they converted to Catholicism). They were educated and trained in cottage industries, attaining a degree of wealth and independence unique within the Spanish Americas. Threatened by slave traders, they were permitted by the Spanish crown to form militias to defend the settlements. When the Jesuits were expelled from the Americas in 1767 the slave trade returned with a vengeance.

The picture that emerges is of an inefficient, confused attempt by the Catholic church to bring moral order to a sphere of human relations that was almost beyond redemption. To talk of a cynical historical conspiracy against human liberty is absurd. Given how ubiquitously cruel medieval man could be, we might dare to suggest that the church was actually the native’s only real friend.