The issues raised by Philip Morgan in a 2007 article on Italian Fascism have been rekindled, says Christopher Duggan. 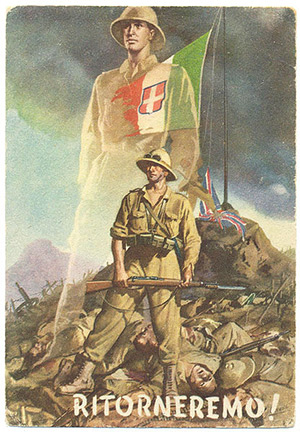 Philip Morgan’s article highlights the degree to which Italy has chosen to remember its Second World War principally through the events of 1943-45: the years of the Resistance and of German (and Allied) occupation. The recent furore surrounding the death of Erich Priebke has brought this issue back into the limelight. Priebke was one of the German SS officers responsible for the Fosse Ardeatine massacre of March 1944, in which 335 Italian civilians (a mixture of political prisoners, Jews and innocent bystanders) were killed in retaliation for a bomb attack on German troops by Italian Communist partisans in Rome. Priebke was sentenced in 1998 to life imprisonment.

The massacre has become the pivotal site of Italian memorialisation of the war and the determination with which the authorities in Italy, including the Vatican, have sought to prevent Priebke’s burial on Italian soil is indicative of its symbolic potency.

As Morgan underlines, the accent is on Italy as a victim: of the Nazi occupation as well as Allied bombing. Military humiliation is thus consigned to history and, more importantly, it leaves Italy’s responsibility for the outbreak and escalation of the war overlooked.

Behind the question of Italy’s culpability lies the issue of the responsibility of ordinary Italians for Fascism. A process of self-exoneration has operated along two broad fronts. The first claims that Mussolini’s regime was a brutal dictatorship that oppressed the masses. According to this reading – championed by the Left – ordinary Italians ‘endured’ the regime as best they could until 1943 and then showed their true colours by supporting the Resistance against the Nazis and Fascists.

The second reading, peddled by the centre-right since 1945, which has gained in popularity over the last 20 years thanks to Silvio Berlusconi and his neo- (or ‘post’-) Fascist allies, maintains that the regime was essentially benign and tolerant, with little serious ideological content. Mussolini saved the country from Bolshevism, made the trains run on time, backed the Church and introduced progressive social measures, leaving Italians free to be what they have always been: easy-going, humane and broadly indifferent to politics.

The racial laws are ignored or else attributed to pressure from the Nazis. The alliance with Hitler is ascribed either to a noble attempt by Mussolini to restrain Germany, or to a patriotic concern to spare Italy incorporation into the Third Reich. Almost completely overlooked is the regime’s unbridled international aggression and the atrocities perpetrated in regions such as Yugoslavia, Greece and the Italian colonies of Libya and Ethiopia.

The bowdlerisation of Fascism – an aspect of which is the idea that Italy’s colonialism in Africa had been a ‘civilising mission’ – accounts for one of the more grotesque acts of memorialisation: the decision by the council of the town of Affile near Rome to commemorate General Rodolfo Graziani, responsible for numerous atrocities in Libya and Ethiopia in the 1930s and the leader of the Fascist armed forces in northern Italy alongside the Germans in 1943-45. In August 2012 a memorial park and monument to the general was inaugurated amid public festivities. Tributes were led by a priest.

Italy still needs to reckon with its Fascist past. Fascism may not have been as heinous as its Nazi counterpart, but it was a regime that had intolerance and violence at its heart and was brutal and destructive. Equally misleading is the view of the Left. Fascism was oppressive but, as recent research into the diaries and letters of the period shows, this did not stop millions of ordinary Italians subscribing to much of the ideological vision of the regime.

This vision was based on the view that the liberal regime that had preceded it had failed to create the great Italy dreamed of by the Risorgimento. Fascism would rectify this and forge a strong, integrated community of morally regenerated men and women, bound closely to the state and its charismatic leader. Fascism used language and values that resonated with ordinary Italians (as diaries and letters show).

The backing of the Vatican for Fascism almost from the start in 1922 was a huge factor in ensuring popular support for the regime. This, too, is something that historians are becoming aware of, as the archives for the pontificate of Pius XI (1922-39), opened in 2006, reveal. Far from defending itself against Fascism, the Vatican saw in Mussolini’s regime an instrument for the re-Christianisation of Italy and of Europe. The Church’s recent stance over Priebke has been praised, but the Church’s active relationship with Italian Fascism in the interwar years still needs to be addressed – as does Italy’s.

Christopher Duggan is Professor of Italian History at the University of Reading and the author of Fascist Voices: An Intimate History of Mussolini’s Italy (Bodley Head, 2012)