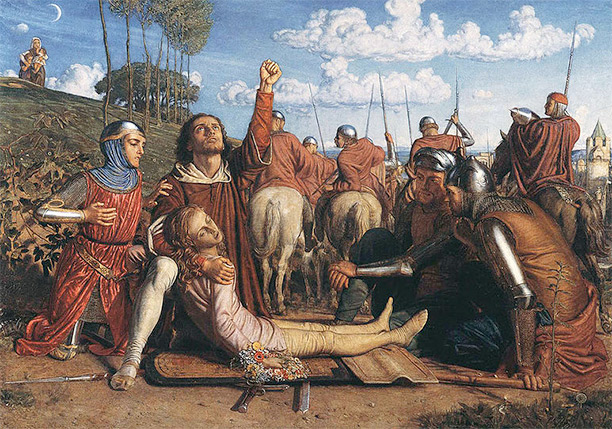 The coup d'etat staged in the ancient Capitol of Rome on Whit Sunday 1347, which made a thirty-something orator of plebian stock effective ruler of the Imperial city, ranks as one of the most intriguing and quixotic episodes in the history of medieval and Renaissance Italy.

The rise and fall of Cola di Rienzi (christened Nicolas di Lorenzo by his parents but brought up at Anagni, about sixty-five kilometres from Rome - past home also of Pope Boniface VIII, whose resistance to the French king Philip the Fair at the turn of the century had provided a role model) cannot be understood without reference to the growing sense of frustration in fourteenth-century Italy at the contrast between Rome's past glories and her present indigent state.

Since the collapse of the Roman Empire, the failure of any one power to establish hegemony over the whole of Italy for a long period of time had encouraged the fragmentation of political identities and allegiances. Rome had become a symbol of this: its classical built heritage ravaged by numerous sackings - the latest and most savage by the Normans in 1084 - its civic structure degenerated into control ostensibly by a Commune but in reality by rival camps of robber-baron style 'nobles' whose power base was geographical.

The departure of the papacy to Avignon in 1305 - in the aftermath of Boniface VII's bitter struggle with Philip the Fair - had further diluted civic pride, but it also stimulated an intellectual fightback. The lyrics and laments of Petrarch - who significantly expressed his proto-Renaissance thoughts in Latin and Italian - celebrated Rome and its past glories, and his visit to the city in 1341, when he was crowned with laurels as 'poet laureate' on the Capitol, acted as a catalyst for the aspirations of Rienzi, whose friend and supporter Petrarch became.

Rienzi had already attracted attention when he was sent as an envoy to the pope in Avignon in 1343 and had denounced, in Ciceronian style, the corruption in Rome. He proclaimed the need for the pope, Clement VI, to reinvigorate the city's spiritual life by proclaiming a 'Jubilee year' for 1350 and returning to Rome. With Petrarch's support Rienzi obtained papal backing and after setbacks, set about building his power base and reputation in the city. He used symbolic occasions - such as the recovery of fragments of classical masonry bearing Imperial Senate decrees - to remind Romans of the lost authority of the people in classical Rome and continued to attack the barons' corruption, gaining support both from the ordinary Roman and the bourgeoisie. His ability to pose as the pope's representative gave him room for manoeuvre, augmented by the support of the papal vicar, the bishop of Orvieto.

With tension in the city high, Rienzi led a procession in full armour and surrounded by symbols of the saints, a red flag of liberty and banners with the motto 'Roma caput mundi’ and occupied the Capitol on Whit Sunday, 1347. The assembled crowd heard Rienzi proclaim a new constitution, with himself having full powers to rule the city, effectively sidelining the nobility. In a conscious echo of Republican Rome, his administrators were to be called 'tribunes of the peace... and liberators of the sacred Roman Republic'.

The nobility, taken by surprise, were forced to submit and Rienzi's vigorous follow-up - confiscation of their fortified strongholds, levying of new taxes and minting new currency - was for the time being accepted by a slightly uneasy papacy, worried that its agent might be out of control. Rienzi's subsequent actions increased fears; announcing that his Roman revolution was, in effect, for export, Rienzi, as Tribune, claimed authority beyond the city, backing it up in August 1347 by a series of eccentric ceremonies (reminiscent of a modern Gadaffi) in which he proclaimed himself 'Champion of Italy and Lover of the World' and backed it up with ritual ablution, installation as a 'Knight of the Holy Ghost' and the arrest and threats of death to the Roman nobility.

But the wheel of fortune turned. The nobility sought allies in Florence, the people grew weary of Rienzi's excesses, the pope withdrew his support and in December 1347 Rienzi fled Rome after rioting and his excommunication.

After subsequent imprisonment and trial, it looked as if he might enjoy rehabilitation; at the prompting of Petrarch, Pope Innocent VI halted proceedings against Rienzi. He was reappointed as a Roman senator and returned to the city. But his power-base was gone - and when Rienzi, under cover of restoring papal authority, attempted to renew his duel with the nobility and levy new taxes to revitalise the city, he again provoked conflict. In October 1354 he was captured and killed at the same site where the Republican tribune, Tiberius Gracchus, had been killed in 133 BC. Rienzi's corpse was hung on public display and burnt.

His fate thus foreshadowed in several respects that of the Florentine firebrand Savonarola, who had a similarly meteoric career as moral agitator and employer of the grand public gesture in Florence 140 years later. Rienzi's legacy was a fable for later Romantic evokers of Roman and Italian greatness - he was seen, despite his vanities and excesses, as a would-be liberator and invigorator of the Eternal City.