China and Japan: Still at War

The cold but continuing conflict between China and Japan is the subject of sustained attention from scholars, says Jonathan Fenby. 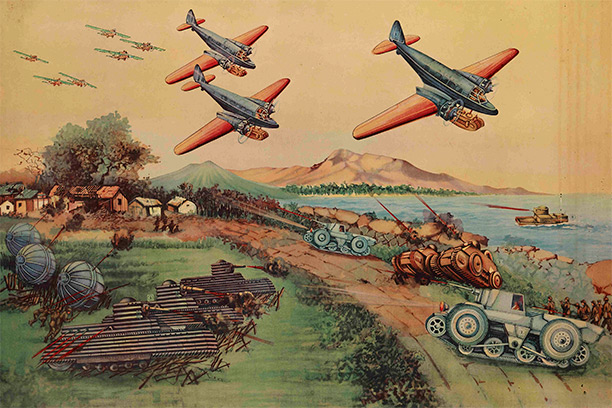 East Asia, with a fifth of the world’s population, has developed faster than any other region in recent decades. Containing the second- and third-largest economies on earth in China and Japan, it holds the key to international growth at a time of sluggish performance in the West. Yet the region is deeply embedded in its past. History matters here, be it in China looking back to its imperial, Confucian past stretching over thousands of years, or in Japan’s celebration of the Meiji Restoration that propelled it to challenge the West in 20th-century wars and then to become a world leader in technology.

The region’s past has another, more troubling resonance today, as shown in a major new book on Japan’s war with China in the middle of the last century and a striking exhibition at the British Museum of how propaganda worked on both sides to magnify hostilities. The relevance of history is all too evident at a time when Beijing and Tokyo are at loggerheads over a group of uninhabited islands in the East China Sea, with both sides stepping up the rhetoric against the backdrop of a troubled regional situation reaching from the vagaries of North Korea to China’s other maritime disputes in the South China Sea, not to mention its claim to reassert control over Taiwan.

This antagonism welled up in the war of 1894-95, after centuries during which the Japanese looked to the Chinese as masters of East Asia. But the modernisation of Japan in the second half of the 19th century bred an expansionist self-confidence, which was increased by its decisive victory over the declining power of the Qing dynasty in a conflict that began in Korea but soon spread to China, itself.

Pressure from western states with concessions in China, who did not want the Qing to fall, restrained Tokyo’s demands, but Japan still gained Taiwan and substantial rights in Manchuria as well as a large indemnity. The subsequent victory in the Russo-Japanese war of 1904-5 and Japan’s capture, in alliance with the British, of the German concession at Tsingtao (today Qingtao) on the Shandong Peninsula in 1914 established it as the dominant power in the region, a position confirmed by the decision at Versailles in 1919 to hand it the German holdings in China.

That set off protests known, from the date of the first demonstration, as the May the Fourth movement, which spawned ideas of democracy, science and modernisation and influenced many young Chinese, including Mao Zedong. A dozen years later Japan grabbed Manchuria from the Nationalist regime in China and then, in 1937, launched a war that lasted until 1945.

That war is the subject of a new book by Rana Mitter, who also wrote a fine study of the May the Fourth movement. China’s War with Japan 1937-1945: The Struggle for Survival (Allen Lane) is multi-faceted in describing the many currents that affected China. On the Chinese side there were the Nationalists, pent up in their haven of Chongqing; the collaborationist regime in Nanking, where the worst single atrocity of the conflict had been committed by the advancing invaders; and the Communists in their base in the north of the country, where they fought as little as possible, waiting for the civil war to follow. The Japanese controlled most towns, ports and communication routes. After Pearl Harbor, there were also the Americans, though Roosevelt was intent on not committing ground troops. Their representative, General ‘Vinegar Joe’ Stilwell, was a Yankee of high principles and short temper who turned out to be the wrong man in the wrong place at the wrong time.

The war left a complex legacy. It helped the subsequent rise of the Communists and, after ‘patriotic education’ became the staple of Chinese education in the 1990s, embedded in a deep hostility towards Japan, which the aggressor power of the past century has done little to dispel. Anti-Japanese demonstrations and boycotts break out regularly in China, while Japan fuels the flames with incidents such as the recent photographs of Prime Minister Shinzo Abe sitting in a fighter plane with the same number as the biological warfare plant where Chinese human guinea pigs were experimented on.

The British Museum exhibition, The Art of Influence: Asian Propaganda (to September 1st), is organised by Mary Ginsberg, who has specialised in studying propaganda. It stretches before and after the 1937-45 war, but has striking exhibits from the drawn-out conflict. It is unique in bringing together images from the Nationalist, Japanese and collaborationist regions of China, along with home front items from Japan. Traditional forms such as Japanese folk tales portrayed in ‘paper theatre’ are used to convey messages and Chinese children’s magazine spread propaganda. There is a kimono with patriotic inscriptions and a sake cup decorated with invocations of victory and daredevil pilots swooping from the skies, while Chinese posters depict the invaders as fearsome bringers of death and destruction.

What the exhibition and Mitter’s book both bring home is the total nature of the Sino-Japanese war, not only in its death toll of between 14 and 20 million, but also in its effect on everyday life with floods of refugees and the destruction of society. One result was to facilitate the Communist conquest in 1949; the other was to feed  deep historical sentiments which colour the politics of East Asia to this day.

Jonathan Fenby is author of Tiger Head, Snake Tails: China Today, How It Got There and Where It is Heading (Simon and Schuster, 2012).