We ask some of our leading historians to tell us about the books that they have found most stimulating over the past 12 months. 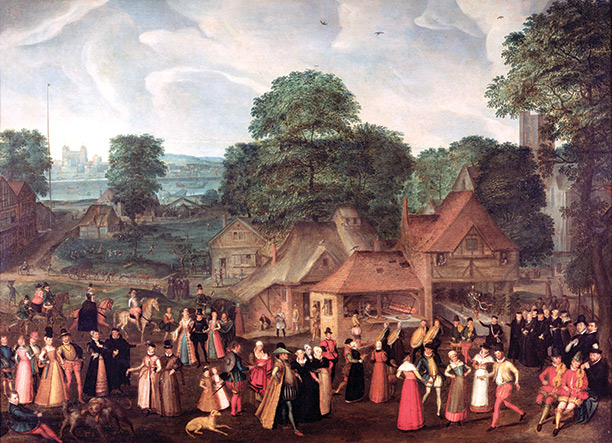 ‘Who wrote Shakespeare?’ is right up there with ‘Who was Jack the Ripper?’ For far too long academics have scarcely troubled to respond to the doubters’ it-was-the-earl-in-the-library-with-a-candlestick version of literary Cluedo, but now editors Paul Edmonson’s and Stanley Wells’ Shakespeare Beyond Doubt: Evidence, Argument, Controversy (Cambridge University Press) have produced a satisfying response. From contributions on the local Stratford idiom that peppers Shakespeare’s plays, through manuscript analysis, to (my favourite) the theatrical craft that enabled small casts to successfully double roles, the book is thorough, rigorous, scholarly – and a lot of fun.

Every bit as exhilarating was my discovery of Mary S. Hartman’s 2004 book, The Household and the Making of History: A Subversive View of the Western Past (Cambridge University Press). Hartman takes demographers’ identification of the northwestern European marriage pattern – where couples married late, were relatively equal in age and lived in nuclear households – and builds a thesis to suggest that this single demographic precipitated the Protestant Reformation, the Industrial Revolution and the rise of capitalism. Subversive it certainly is. And persuasive.

Judith Flanders is the author of The Victorian City: Everyday Life in Dickens’ London (Atlantic, 2012).

Peter Sarris’ Empires of Faith (OUP, 2011) is a brilliant book about the fall of Rome and the rise of Islam, filled with insights and revolutionary ideas by one of the finest historians in Britain. Rodric Braithwaite’s Afgantsy (Profile, 2012) is an account of the Soviet invasion of Afghanistan in 1979, which reads like a thriller. There is a mass of original material here, drawn from contemporary Russian sources, much of it published in English for the first time. Christopher de Bellaigue’s Patriot of Persia (Bodley Head, 2012) is about a wildly popular figure who promised Iran’s future would not be dependent on paying homage to the west: Mohammed Mossadegh, who was brutally removed from power in a coup orchestrated by the CIA in 1953. De Bellaigue is an outstanding journalist and you can tell why. Timothy Snyder’s Bloodlands: Europe Between Hitler and Stalin (Bodley Head, 2011) is a remarkable study about suffering on an astonishing scale in Eastern and Central Europe in the 1920s, 1930s and during the Second World War. Snyder has dug out some remarkable sources to tell a story that is both moving and tragic. Mary Laven’s Mission to China (Faber & Faber, 2011) is about a 16th-century Jesuit mission to China that was led by the charismatic and determined Matteo Ricci. A charming and eye-opening account, which beautifully evokes the sense of wonder as well as the challenges these men faced many thousands of miles from home.

Peter Frankopan is Director of the Oxford Centre for Byzantine Research and Senior Research Fellow at Worcester College, Oxford.

My history book of the year is Joel F. Harrington’s sparkling The Faithful Executioner: Life and Death, Honour and Shame in the Turbulent 16th Century (Bodley Head), which draws on the diary of Nuremberg executioner Frantz Schmidt and his terrible catalogue of torture and capital punishment. On page after page this bloody tale delivers an extraordinary way into understanding the mentality and society of the age.

Meanwhile Leanda de Lisle’s Tudor: The Family Story (Chatto & Windus) is a very lucid, entertaining and excellent read. While we don’t agree on every last thing (Tudor historians? Agree?), I found she offered many moments of acuity and fresh insight that brought new perspectives to familiar territory. A must-read.

I was also completely enchanted by Hannah Dawson’s fiercely brilliant little book, Life Lessons from Hobbes (Macmillan). Her lyrical, clear-eyed prose made me shake off many of my erroneous assumptions about the ‘Monster of Malmesbury’ – and envy Dawson’s great facility with language.

Suzannah Lipscomb is Senior Lecturer and Convenor for History at the New College of the Humanities.

My favourite history book of 2013 is actually an historical novel, a genre of which I am not normally fond. But Andrew Greig’s brilliant Fair Helen (Quercus), a re-imagining of the Border ballad ‘Fair Helen of Kirkconnel Lea’, is so superbly set in its time and place, the violent but beautiful country of the Borders, that it is irresistible. In Greig’s lyrical prose (plentifully scattered with 16th-century Scottish words, but perfectly comprehensible in context, though there is a glossary) the Scottish Borderlands of the 1590s come vividly to life. At a time when the Scots were impatiently awaiting the death of the ‘Auld Hag’, Elizabeth I, the machinations of new men seeking to curry favour with James VI are added to the blood feuds that go back centuries. It is a climate in which no one – friend, family, lover or political patron – can be trusted and, though there may be brief respite from old hatreds during raids on England, the underlying enmities remain and will ruin lives forever. Fair Helen has a beautiful feisty and sexually liberated heroine and a marvellously sinister villain. Yet it is a great deal more than a tale of a distant time. A beautifully written elegy to love and loss, it will draw you in from the first page. And its final revelation is heartbreaking.  Quite simply, a wonderful read.

The most interesting and instructive book I read this year was Jonathan Sperber’s Karl Marx: A Nineteenth Century Life (W.W. Norton). Sperber, of course, is a well-known historian of Europe and he gives us a superbly-rounded portrait of Marx’s age and the evolution of his doctrines, arguing (persuasively) that Marx’s theoretical work was shaped by very specific 19th-century concerns and passions. Meticulously researched and beautifully written, this was my book of the year, but it faced stiff competition from Partha Chatterjee’s Black Hole of Empire: History of a Global Practice of Power (Princeton University Press, 2012). Chatterjee shows how – and why – the old story of the Black Hole killings in 18th-century Calcutta has been used, distorted and re-imagined over 200 years by imperialists, nationalists and scholars. But despite this thematic focus, the book is so richly detailed and so thoughtfully argued that it can serve as the perfect introduction to the history of British India and, indeed, of imperialism itself.

Chandak Sengoopta is Professor of History at Birkbeck, University of London.

A great addition to anyone’s present pile this year would be Lucy Inglis’ Georgian London: Into the Streets (Viking, 2013). Reading her brisk, astringent and highly amusing tour around various quarters of Hanoverian London on Boxing Day is the ideal antidote to the excesses of Christmas and will keep you snugly entertained in your armchair for hours.  I also greatly enjoyed the Riddle of the Labyrinth: The Quest to Crack an Ancient Code and the Uncovering of an Ancient Civilisation (Profile, 2013) by Margalit Fox, a fascinating and very readable account of the life and work of the three scholars whose separate efforts over the course of a century eventually led to the cracking of Linear B. This group biography elegantly illustrates how progress in historical scholarship is made possible by the work of many hands, not just those of a single genius. Finally, the most interesting public history book I have read this year is Ann Gray’s and Erin Bell’s History on Television (Routledge, 2012), a must-read for anyone who wants to understand how history is commissioned and the audience segmented by producers; and it convincingly analyses how and why women historian-presenters often get a rough deal on the telly.

My top books for 2013 all have the theme of getting behind the grand narrative and looking at the ancient world in light of the daily lives of individuals and families. The first – which should not be set aside now that the marvellous Pompeii exhibition at the British Museum is over – is Paul Roberts’ Life and Death in Pompeii and Herculaneum (British Museum). The best exhibition catalogues strike a wonderful balance between the infinite details and the bigger picture they add up to and this one delivers in that respect. Ari Bryen’s Violence in Roman Egypt: A Study in Legal Interpretation (University of Pennsylvania Press) strikes the same balance in a very different way, through a vivid discussion of ancient papyrus documents discovered archaeologically, often in ancient garbage heaps, in the dry climate of Egypt. Bryen opens a window onto the problems and strategies of ancient households in terms that are occasionally spine-chilling. Finally, Reza Aslan’s Zealot: The Life and Times of Jesus of Nazareth (Westbourne) has generated quite a lot of controversy, but it actually offers a solid and sensible survey of what biblical scholars have been doing in recent decades to put Jesus back into history as a first-century person, who lived and died in Roman Galilee and Judaea.

Kate Cooper is Professor of Ancient History at the University of Manchester. Her latest book is Band of Angels: The Forgotten World of Early Christian Women (Atlantic Books, 2013).

I hugely enjoyed Max Adams’ The King In The North: The Life and Times of Oswald of Northumbria (Head of Zeus) which pulls off the  feat of providing a gripping, panoramic portrait of seventh-century Britain without cutting corners. Yes, it has a title that deliberately echoes Game of Thrones and yes, anyone buying it hoping for murderous power-games will have all their expectations met. At bottom, though, this is a deeply scholarly book: as at home with the archaeological evidence as with the demanding patchwork of written sources. I also much admired David Reynolds’ The Long Shadow: The Great War and the Twentieth Century (Simon & Schuster). As the title implies, Reynolds has had the brilliant idea of examing the Great War by tracing the pattern of its reflections over the course of the century that followed it. As an introduction to the controversies and complexities of a period of history that will be on all our demands next year, it is unlikely to be bettered.

Tom Holland’s new translation of Herodotus’ The Histories is published by Penguin Classics.