The Birth of Urho Kekkonen 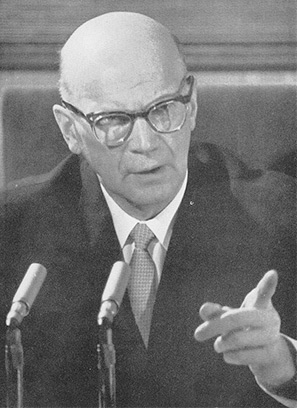 For most of the last millennium Finland has been dominated by either Sweden or Russia, and in 1809 the country was absorbed into the empire of the Tsars. Urho Kekkonen, Finnish president for twenty-five years to 1981, was to lead a small country living in the shadow of a powerful and imperialist neighbour. Born the son of a foreman lumberjack at Pielavesi in central Finland, he was seventeen when Finland took advantage of the Bolshevik Revolution to declare its independence; at eighteen he became an officer in the White Guard in a civil war against the Moscow-supported Reds.

Kekkonen took his law degrees at Helsinki University, where he helped to obliterate the Tsar’s monogram on the university’s façade with a coating of tar. A notable high-jumper and cross-country skier, in his thirties he became an Agrarian Party member of parliament. He was still sternly anti-Russian and after the defeat by the Russians in the war of 1939-40, he was one of only three MPs to vote against a peace which yielded Finnish territory to the USSR. The Finns fought on the German side against the Soviet Union in the Second World War, but managed to remain independent afterwards, though ceding territory again in 1944 when an armistice with the Soviets was agreed.

By now Kekkonen had changed his tune. In 1943, as the Agrarian Party’s leader, he argued that ‘strict neutrality’ combined with ‘good neighbourliness’ towards the Soviet Union was Finland’s only hope of remaining independent. He became prime minister in 1950, when J.K. Paasikivi was president, and after Paasikivi’s retirement and death in 1956, Kekkonen succeeded him. The Paasikivi-Kekkonen line, as it came to be known, was friendliness towards the Soviet Union. In 1961, when Khruschev was agitated about NATO exercises in the Baltic, Kekkonen not only calmed him down, but also let it be known in Finland that Khrushchev would remain calm if he, Kekkonen, was returned as president again. Upon which the leading rival candidate withdrew.

Though critics wondered whether Helsinki always needed to be so subservient to Moscow, Kekkonen’s policy was approved by the majority of his countrymen and he was re-elected president time after time. He avoided entanglement in the Warsaw Pact and the Soviet empire of puppet states and kept his country in being, and by 1977, when virtually all Finnish political parties had accepted his line, it was described by a leading sociologist as the key integrating factor in Finnish society. He was eighty-one and one of the world’s longest-serving heads of state when arteriosclerosis forced him into retirement in 1981. By that time he had made Helsinki a centre for international conferences and meetings on détente, and given Finland a substantial role in United Nations peace-keeping operations. He had also been awarded the Lenin Peace Prize, in 1980. He died in Helsinki in 1986, a few days short of his eighty-sixth birthday.