The Birth of Gerardus Mercator

The Flemish cartographer was born on March 5th, 1512. 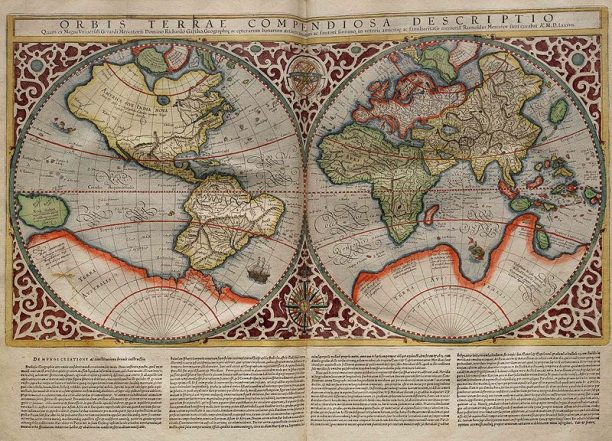 The age of discovery that began with Christopher Columbus, along with Ferdinand Magellan’s conclusive demonstration that the Earth is round, created a demand for new maps and confronted cartographers with the problem of how to depict the spherical Earth on a flat surface. Of the various solutions, or ‘projections’, the one accepted as the best was that of Gerardus Mercator, which is still in use today. It was also Mercator who first used the term ‘atlas’ for a collection of maps.

He was born Gerhard Kremer at Rupelmonde in Flanders (now in Belgium), the seventh and last child of an impoverished German family which had recently moved there. His father was a cobbler, but the surname meant ‘merchant’ and Gerhard turned it into Latin as Mercator after his father and mother died when he was in his teens. A great-uncle who was a priest made sure that he got a good education and after graduating from the University of Louvain in 1532 he studied mathematics, geography and astronomy under Gemma Frisius, the Low Countries’ leading figure in these fields. He learned the craft of engraving from a local expert called Gaspar Van der Heyden and the three men worked together in the making of maps, globes and astronomical instruments for wealthy patrons, including the Holy Roman Emperor Charles V.

In 1538 Mercator produced a map of the world on a projection shaped like a pair of hearts. His inability to accept the Bible’s account of the universe’s creation got him into trouble with the Inquisition in 1544 and he spent some months in prison on suspicion of heresy before being released. John Dee, the English mathematician, astrologer and sage, spent time in Louvain from 1548 and he and Mercator became close friends.

In 1552 Mercator moved to Duisburg in the Duchy of Cleves in Germany, where he enjoyed the favour of the duke. He set up a cartographic workshop there with his staff of engravers and perfected the Mercator projection, which he used in the map of the world he created in 1569. It employed straight lines spaced in a way that provided an accurate ratio of latitude and longitude at any point and proved a boon to sailors, though he never spent a day at sea himself. In the 1580s he began publishing his atlas, named after the giant holding the world on his shoulders in Greek mythology, who was now identified with a mythical astronomer-king of ancient times. Strokes in the early 1590s partly paralysed Mercator and left him almost blind. A final one carried him off in 1594 at the age of 82 and he was buried in the Salvatorkirche in Duisburg.