The Battle of the Golden Spurs

Richard Cavendish describes how The Battle of the Golden Spurs, known also as the Battle of Courtrai was fought on July 11, 1302, near Kortijk in Flanders. 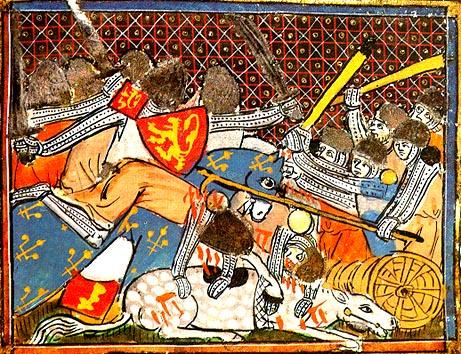 Hundreds of pairs of golden spurs were found on the bodies of dead knights on the battlefield and hung up in triumph in the abbey church of Courtrai, whose townspeople had inflicted a remarkable defeat on the massed chivalry of France. Courtrai was a prosperous Flemish cloth town on the River Lys at a time when Flanders was entangled in the rivalry between France and England, whose wool was the raw material of its cloth business. When Count Guy of Flanders made an alliance with Edward I of England, Philip the Fair of France invaded the country, carrying Guy and his sons off to Paris as prisoners and installing French officials to rule Flanders. The Flemings, their independence and prosperity imperilled, rose in revolt and the French garrison at Bruges was massacred in May 1302.