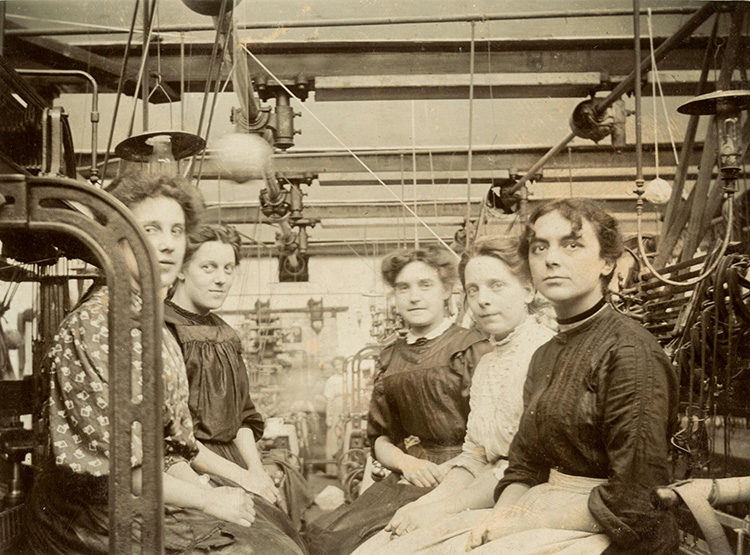 Before the Industrial Revolution and the advent of factories, the cotton-spinning process was based in workers’ homes: the man of the house wove cloth on a handloom; his wife, usually helped by their children, cleaned the raw cotton, then carded and spun the yarn ready for weaving.

The invention of mechanised cotton spinning moved the process out of homes and into factories. The large ‘spinning jennies’ and Mule spinning machines were worked by men, as strength was needed to operate them.

As women’s traditional role as spinners was eroded, they turned to handloom weaving to make a living. But falling prices for handwoven cloth and the advent of ‘steam’ looms led weavers’ wives and daughters to seek work in the mills, powerloom weaving, working small jennies (‘throstles’) or tending cotton processing machines (carding and roving).

The fixed hours of mill work were preferable to the virtual slavery of domestic service and the factory wages gave women some financial independence.

Would-be reformers of the factory system focused their firepower on its widespread use of child labour. But they also claimed that the traditional family unit was imperilled: a woman’s place was in the home, caring for husband and children. Some factory owners, like Thomas Ashton at Hyde in Cheshire, insisted that female workers leave their employment upon marriage.

A significant minority of wives, however, worked from sheer necessity. In the 1840s, in Lancashire alone, a survey of 412 cotton factories found that just over half of the 116,300 workers were female. Around 10,700 of them were married women. These women were not the sole breadwinners: over 9,200 of the husbands in this survey had regular work. Only 821 husbands were unemployed, undermining some critics’ claim that women worked, while their spouses boozed in the nearest pub.

There was evidence that factory women’s 12-hour shifts endangered their children’s health. Mary Woodhouse, a midwife at the Manchester Lying-In Hospital, told an investigator in 1833 that factory women gave their babies ‘the breast at breakfast, and at noon, and in the evening’. Babies and children were left with childminders, while the women worked.

Elizabeth Woodhouse, another midwife, said the workers’ children were left with ‘any one they can get ... some of them suffer very bad from this’ and that ‘many’ factory women worked ‘up to the very day ... some up to the very hour’ their baby arrived. Most mothers returned to work a fortnight after their confinement.

After such long shifts, workers desperately needed a good night’s sleep. Children were kept quiet at night with opiates: laudanum mixed with sugar and water, opium and the infamous ‘Godfrey’s Cordial’, known as ‘Mother’s Friend’, a mixture of laudanum and treacle. The children were too drugged to eat and became malnourished. Some died from starvation; others grew up sickly and stunted.

Following years of campaigning, in 1847 the working day in textile mills for women and young persons under 18 was reduced to ten hours to improve conditions.

Factory inspectors interviewed workers after the new legislation was introduced, with mixed responses. One married weaver’s weekly wages had fallen from 10s (50p) to 8s 9d, but she had ‘more time’ for her family and no longer paid her neighbours for ‘cleaning the house, washing [and] cooking victuals’. Another woman, however, said that she would rather work 12 hours as she needed the extra money; her tailor husband was often unemployed.

By 1873, over 26 per cent of women working in cotton mills nationally were married, three quarters of whom were of childbearing age. Factory inspector Robert Baker pointed out that, if these women were excluded from the workplace, they could not support their children or pay for their education. He thought that the best way to reduce the ‘excess of infant mortality’ in towns was to stop women returning to work until several months after the birth of each child. But he did not suggest how they could be supported while their babies were tiny (there was no statutory maternity benefit until 1911).

Some thrifty women helped themselves and their families by using penny savings banks. At one Salford mill in 1874, which employed 500 women, workers paid in deposits from 6d to 5s per week. They received five per cent interest on accounts over 10s in credit.

This factory bank was ‘a great boon to the married women ... as a kind of lying-in club’. A wife put away money weekly for her baby’s arrival ‘unknown to her husband, and without his being able to meddle with it’. She no longer rushed back to work ‘soon after her confinement’, safeguarding her health and that of her baby. Despite all these benefits, only 63 of the mill hands had deposited savings, so maybe few could spare the money.

In 2014, three quarters of women with dependent children were in work or actively looking. Two in five women of working age not employed gave ‘looking after the family or home’ as their primary reason for being so. Despite better educational and working opportunities, today’s mothers face similar tensions between the economics of going out to work and childcare as their 19th-century forebears.

Sue Wilkes is the author of Tracing Your Manchester and Salford Ancestors  (Pen & Sword, 2017).

The Cloth Mills of the Stroud Valley