What Lies Beneath: The Black Death in London

The discovery of 13 bodies in a London plague pit has helped to illuminate the murkier aspects of life in the 14th century, writes Alexander Lee. 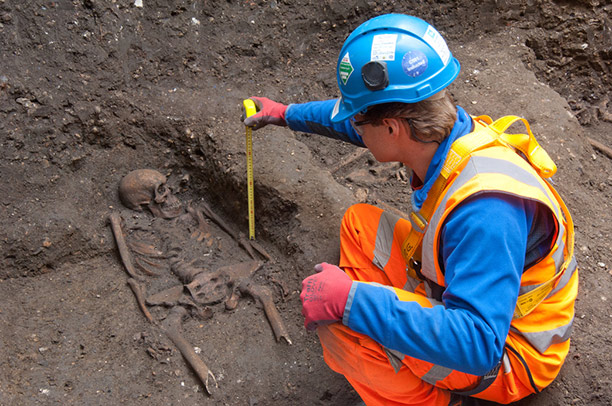 Deep beneath the surface of London’s Charterhouse Square, a grisly secret has been unearthed. Last week, thirteen bodies, neatly arranged in rows, were discovered by construction workers digging a shaft for the city’s new Crossrail project near Smithfield Market. But far from being the fearful remains of a ghastly crime, pottery fragments found alongside the skeletons have revealed that these long-deceased individuals were victims of the Black Death, and were hastily buried in makeshift graves not long after the bubonic plague first struck England in the summer of 1348.

The discovery has answered a long-standing question. Although historians have long known that a ‘plague pit’ had been dug outside the walls of medieval London, they could only guess at its location until now. Thanks to Crossrail, the geography of the plague has become a good deal clearer.

But if the bodies of Charterhouse Square have answered one question, they also present another, perhaps more intriguing, conundrum that goes to the heart of the relationship between archaeology and history. For those economic and social historians who work on the subject, the Black Death’s immediate impact on the population of England is a fundamentally demographic issue that can best be examined through (admittedly problematic) documentary evidence. This being so, what can these bodies tell us about the effect of the bubonic plague in those first, deadly months after its appearance?

At first glance, an historian interested in population change might perhaps be forgiven for thinking “not a lot”. A few scattered bodies on the outskirts of fourteenth-century London are unlikely to reveal very much about the broader mortality rate, or such nuanced issues as ‘replacement rates’. The Charterhouse Square plague pit quite simply lacks the context which would give historians a clearer impression of the number of people killed in the first wave of the Black Death, or of the plague’s effect on population levels.

But this is a rather blinkered answer. As far as economic and social historians are concerned, the problem of the Black Death’s impact hinges not so much on how many people died, but on whether the population was actually beginning to decline before the plague struck. In other words, the Black Death come as a bolt from the blue, bringing a halt to a period of steady population growth, or did it strike when the English people were already weakened by famine, malnutrition, and immunodeficiency, thus merely accelerating a downward trend in population levels?

For library-dwelling historians, this is a particularly thorny problem. On the one hand, there is almost no direct evidence for population levels. With the exception of the Domesday Book and the taxation returns for 1377, there are no documents that could give us a reliable impression of how many people were living in England at any given point in the Middle Ages, and scholars are forced to fall back on extrapolating from evidence which provides a fleeting glimpse of the fortunes of the wealthy and the privileged. And on the other hand, the indirect evidence for population change is notoriously difficult to handle. Patterns of land use, agricultural techniques, towns, wages, prices, and the supply of money provide some clue as to the character of the economic pressures which might have been caused by demographic fluctuations, but the evidence they offer is controversial in the extreme.

Lacking any unambiguous documentary sources, historians have completely failed to reach a consensus. But while the historical community are deadlocked, archaeologists working on the Charterhouse Square plague pit may be able to offer a solution, or the beginnings of a solution, at least.

In the hands of archaeologists, the bodies tell us something that bits of parchment simply can’t. No-matter how closely historians analyse bishops’ registers, or the estates of Ramsey Abbey, for example, the documentary evidence will never say anything explicit about how healthy and well-fed people were when the bubonic plague struck, and thus will never quite be able to get to the nub of the issue. But this is exactly the sort of thing that the plague pit in Charterhouse Square could reveal. By analysing the victims’ bones, archaeologists are able to determine not only how old these people were and how hard they worked, but also whether they were malnourished or deficient in certain food groups, or even whether they suffered from any pre-existing conditions that might have been caused by famine. By comparing the data from these thirteen bodies with that recovered from other skeletons found elsewhere, the rudiments of a pattern emerge. And while it is still important to take account of the limited size of the sample, the information that such archaeological analysis may reveal is perhaps the most direct snapshot of living standards in mid-fourteenth century England available, and is hence a startlingly precise insight into whether the plague killed a healthy, growing population, or kicked people while they were already down.

The Charterhouse Square plague pit is certainly no holy grail, and no matter how startling the evidence they throw up, the bodies are definitely not going to end ongoing historical debates about the Black Death. But archaeologists may be capable of casting a new, and potentially revealing, light on a problem that has been – and continues to be – mired in darkness. For historians suffering from the limitations of documentary evidence, this discovery goes to show that sometimes an answer might just be found in what lies beneath.

Alexander Lee is an Associate Fellow at the University of Warwick. His book, The Ugly Renaissance will be published by Hutchinson in September.

Ole J. Benedictow describes how he calculated that the Black Death killed 50 million people in the 14th century, or 60 per cent of Europe’s entire population.