St Paul’s in the Blitz

A great photograph of the Second World War offers many interpretations. 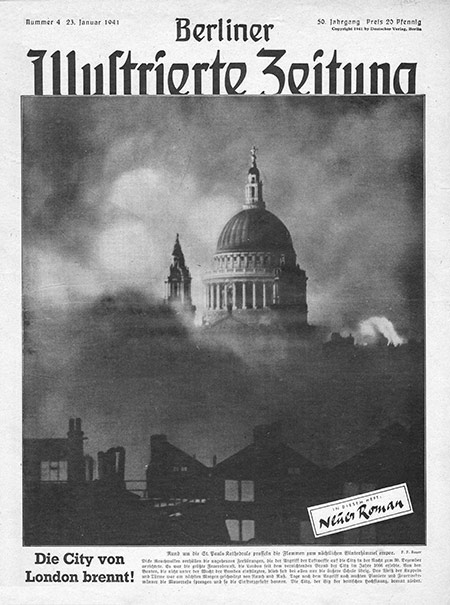 From September 1940, the Luftwaffe attacked UK cities in what became known as the Blitz. By the end of 1941, 41,987 civilians had been killed. At the height of the bombing of London, Associated Newspapers photographer Herbert Mason was on a City rooftop. He took at least three photographs of the skyline alive with flames and smoke. One of these was a photograph of St Paul’s, used ever since as visual shorthand for, not only the Blitz, but Britain’s role in the conflict. It was first published on December 31st, 1940, on the front page of the Daily Mail.

Wren’s cathedral was freighted with symbolism. It evoked the Great Fire of 1666, for one, and the devastation of December 29th, 1940 quickly earned the sobriquet of ‘the Second Great Fire’. The editors of the Daily Mail (the strapline of which, was ‘For King and Empire’) drew on such associations. The photograph was cropped to emphasise the dome of St Paul’s and to minimise the gutted buildings conspicuous in the original. The audience addressed by the photograph – despite paper rationing, the Daily Mail had a circulation of around 1,450,000 – was encouraged to ‘cherish’ this picture as a symbol of ‘the steadiness of London’s stand against the enemy: the firmness of Right against Wrong’. Mason’s image was presented as nothing short of a symbol of civilisation itself.

Such allusions were repeated when the photograph was reprinted in the Illustrated London News on January 4th, 1941 as, ‘a symbol of the indestructible faith of the whole civilised world’. In the US (not yet at war with Germany), the photograph appeared in Life magazine that same month.

This frame of reference was turned on its head when, soon after, the photograph appeared in the German photo- magazine Berliner Illustrierte Zeitung. Here it bore the legend, ‘The City of London Burns.’ Rather than wreathing the dome, the caption asserted, the clouds of smoke obscured the extent of the damage. Emphasis was placed on associations of the City of London with ‘high finance’. The photograph was framed not as a symbol of endurance, but as that of a dangerous enemy.

Such a hostile gloss is almost inconceivable in Britain, though little about the photograph, which conveys sparse detail about the Blitz, makes such positive associations inevitable. It is rather the repeated investment in the photograph of particular meanings, through the uses to which it has been put and the captions which have accompanied it that has established this seemingly obvious significance.

For a brief moment in the 1940s and early 50s the photograph played a different role in British visual culture, when it assumed significance in the debate about postwar reconstruction, which had begun as the bombs fell. Ralph Tubbs used an uncropped version of the image in Living in Cities (1942). Giving equal prominence to the ruins and the dome, Mason’s St Paul’s (captioned ‘The New Opportunity’) helped present the destruction of the Blitz as a chance to improve the public and domestic spaces of Britain through the application of modern architectural and town-planning principles. This campaigning booklet, setting out a bold vision of a London likened to Wren’s unrealised masterplan, sold 134,000 copies.

The building’s symbolic value also made St Paul’s a key element of that renowned postwar spectacle, the Festival of Britain, opened by George VI from the steps of the cathedral before a procession made its way to the festival’s South Bank site. Dominated by Tubbs’ Dome of Discovery, an imposing modern structure with a circumference of 365ft, matching exactly the height of St Paul’s, the festival received over eight million visitors before closing in September. Thus, while in wartime Mason’s photograph was associated with the Blitz spirit, in the postwar period it was used to promote the ‘Spirit of ’45’: the desire to build a different Britain, expressed in the Labour manifesto of that year (‘Let us Face the Future’) and the establishment of the NHS in 1948.

In subsequent decades Mason’s photograph was uncoupled from any progressive postwar agenda. Opinion turned against the architecture of reconstruction to such an extent that, in his Mansion House speech of December 1987, the Prince of Wales could (without any sense of dissonance) invoke Mason’s photograph as part of an indictment of the postwar rebuilding of London: ‘You have, Ladies and Gentlemen, to give this much to the Luftwaffe’, he said. ‘When it knocked down our buildings it didn’t replace them with anything more offensive than rubble. We did that.’

Mason’s photograph has been a vital part of diverse visualisations of the Blitz, which have, in turn, bolstered messages or arguments with contrasting political agendas. The malleability of the photograph accounts in part for its wide circulation. The volume and variety of its uses should compel historians to consider in greater depth the role of the image in shaping collective attitudes and memories of historic events. Images as widely circulated as Mason’s can be formative influences on our understanding of history, helping to create and promote particular views of the past. They constitute what, alongside cultural and social history, we might term visual history and they demand greater attention.

Tom Allbeson is Lecturer in Modern History at Swansea University.