The story of the skull of a victim of the Indian Uprising of 1857 raises profound questions about imperialism. 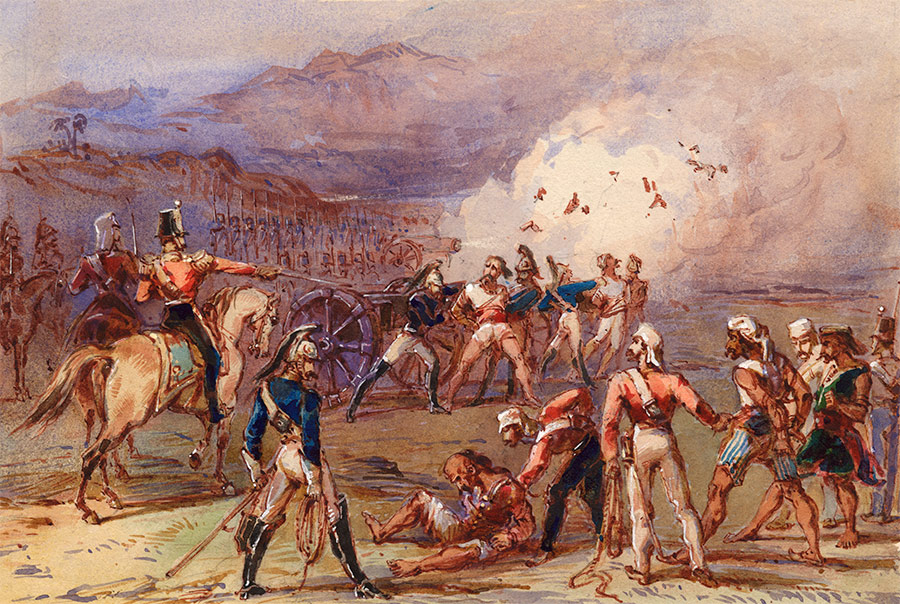 In 1963 the publican of the Lord Clyde pub at Walmer in Kent moved some boxes and discovered an old, battered skull with a note folded up in its eye socket. The note identified the skull as that of Alum Bheg, ‘a principal leader in the mutiny of 1857 & of a most ruffianly disposition’. It accused him of murdering Europeans: as punishment, he had been ‘blown away from a gun’. The skull was thereafter displayed in the pub for the edification of drinkers.

Half a century later, the publican’s heirs – who felt queasy about the matter – contacted Kim A. Wagner, an academic of British imperial history at Queen Mary, University of London. Wagner found that Alum Bheg had joined the uprising in the Punjabi city of Sialkot, an obscure event in what was known then by the British as the Indian Mutiny, afterwards by some Indians as the First War of Independence and today by scholars as the Indian Uprising. Through newspapers and archives, Wagner verified elements from the note hidden in the skull. But what really happened in Sialkot? Who was Alum Bheg? Was he guilty – or innocent? So begins an investigation into the fate of one man and of an empire. The story of Sialkot is an enlightening one, revealing how British authority functioned (or did not) on the ground.

Wagner investigates the history of execution by cannon. Men condemned to death by ‘cannonade’ were bound hand and foot to cannon wheels with the barrel pressing into their chest; a half-charge of gunpowder was enough that Alum Bheg, according to an eyewitness report, was ‘instantly shivered to atoms’. The method was designed to mutilate bodies to such an extent that neither Hindus nor Muslims could perform traditional funeral rites. As one colonial photographer described it, ‘the pieces of flesh and bone are scattered all around and the head goes bounding in front’. In the case of Alum Bheg, his severed head was picked up by Captain Costello of the 7th Dragoon Guards and taken back to his native Ireland.

Wagner’s astonishing final chapter surveys the popular British imperial sport of headhunting. Building on the exhibition of heads on spikes following the Irish Rebellion of 1798 and on the beheading of ‘traitorous’ Caribbean slaves, the British began to collect skulls in India at the executions of ‘Thugs’ (devotees of the goddess Thali) in the 1830s. Occasionally a vague pseudoscientific justification was offered. Yet skull-collecting was not scientifically rigorous: some were turned into cigar-holders or, as with Alum Bheg, ended up in pubs.

All of this raises plenty of questions about the supposed ‘civilising mission’ of empire and who really needed civilising. These questions are by no means anachronistic: they were widely asked at the time. The British mania for collecting skulls was even satirised in Punch, where it was waspishly suggested that headhunting ‘establishes another tie of fellow-feeling and common usage between us and our savage dependencies’.

Wagner radically reframes popular assumptions about how the British Empire was won and run and is impeccably fair. The current trend for reducing history to whether empire was ‘good’ or ‘bad’, he says, is ‘both analytically inept and intellectually parochial ... Mindless empire-bashing is as tedious as jingoistic empire-nostalgia and ... makes for poor history’. There is no need for hyperbole: the story speaks for itself.

As for the skull, Wagner hopes to repatriate it to India. No museum will take it owing to its controversial status and the complex process of legal repatriation requires a great effort of political will both in India and in Britain. Perhaps this engrossing book will draw attention to the case and what remains of Alum Bheg may finally be put to rest.

Alex von Tunzelmann is author of Blood and Sand: Suez, Hungary and the Crisis that Shook the World (Simon & Schuster, 2017). @alexvtunzelmann