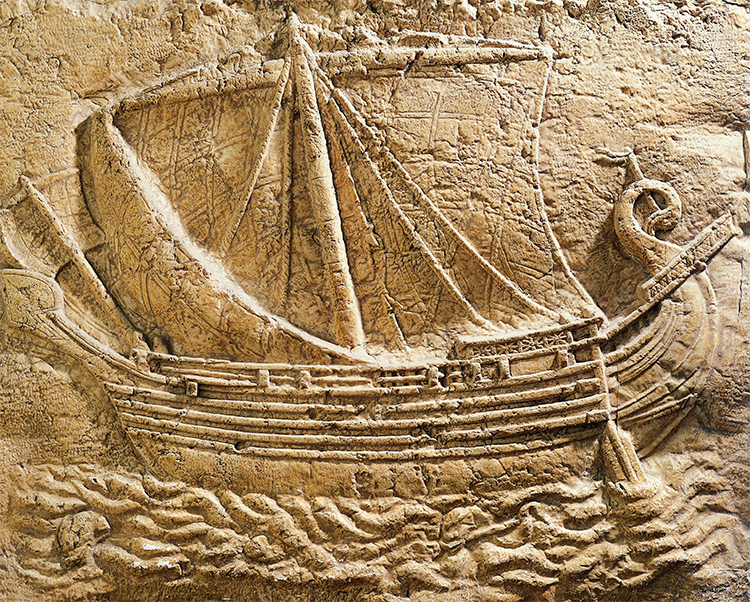 Lebanon is a mountainous country, its eastern and western regions separated by the fertile Bekaa Valley and a narrow strip of land on the Mediterranean coast. A small country, its size belies its rich history.

Close to the ancient port of Byblos is the Nahr el-Kalb (Dog River) Valley, a site that stands as a microcosm of Lebanon’s history. Here, some 20 inscriptions and reliefs have been carved into the limestone rocks. Successive Egyptian pharaohs, such as Ramesses II, left their mark here, as did Near Eastern kings like Esarhaddon and Nebuchadnezzar II. Some inscriptions testify to the presence of Hellenistic and Roman rulers, others, from Sultan Barquq and Prince Fakhr-al-Din, tell of Arab invasions. An 1860 memorial to Napoleon III shows how Lebanon was part of France’s colonial ambitions, although next to it is a dedication to the 1943 independence of Lebanon. Nahr el-Kalb is a summary in stone of Lebanon’s long and varied past.

If we were to take the Nahr el-Kalb inscriptions at their word, then it would be easy to think of Lebanon merely as a transitional warzone and its inhabitants as a marginalised people, buffeted about by history’s superpowers, ricocheting between imperial overlords. In this welcome book Mark Woolmer quashes that notion, arguing that the people of ancient Lebanon – the Phoenicians – had a profound impact on the history of the Mediterranean between c.1550 and 300 BC. As renowned merchants and traders, the wealthy city states that made up the area – Byblos, Tyre, Sidon, to name the best-known – created a cultural unity (in spite of political fragmentation) that was distinctly ‘Phoenician’.

Phoenicia, Woolmer argues convincingly, was nobody’s political pawn. The Phoenicians, it transpires, were the go-to people when the rulers of the superpowers needed money, ships and technical know-how. They were the international businessmen of their day, revolutionising long-distance exchange and redefining the boundaries of the ancient world. Archaeology from around the Mediterranean demonstrates their skills as the navigators, mariners and colonisers par excellence. Evidence of their distinctively elegant material culture is being unearthed in sites across a wide geographical spread:  Spain and Egypt, Palestine and Libya, Crete and Tunisia.

It is a great irony that, as the civilisation that disseminated a workable alphabet to the West (thanks largely to traders and merchants interacting with their Greek counterparts), the Phoenicians have left only a fragmentary written legacy of their own. A few cursory royal inscriptions are all there is to deal with; histories, mythologies, hymns and prayers were never part of a written world. Even the business documents we might expect of these mercantile masterminds are absent.

Woolmer’s task is, therefore, a difficult one and yet he usefully pulls together evidence from the most recent excavations and a wide array of non-Phoenician sources to recreate and challenge what we think we know of the region’s history.

There is much that is new here, including the first proper discussion of the role of women in Phoenician society and a well-constructed account and explanation of Phoenicia’s expansion into the Mediterranean. A fine exploration of the religious world of the Phoenicians employs a firm understanding of Canaanite myth and biblical exegesis to good effect, rooting ritual practice in a decidedly Near Eastern setting.

Woolmer, a leading voice in Phoenician studies, has crafted a clear, jargon-free book, which is accessible to students, teachers and all interested readers, while nonetheless contributing significantly to current scholarship. Anyone who delves into its pages can feel confident that they are in safe hands. Importantly, in giving voice to the Phoenicians, Woolmer reconfirms the rich historical cultural heritage of Lebanon, a country still all too unfamiliar to many in the West.

Lloyd Llewellyn-Jones is Professor of Ancient History at Cardiff University and the author of King and Court in Ancient Persia 559-331 BCE (Edinburgh University Press, 2013).