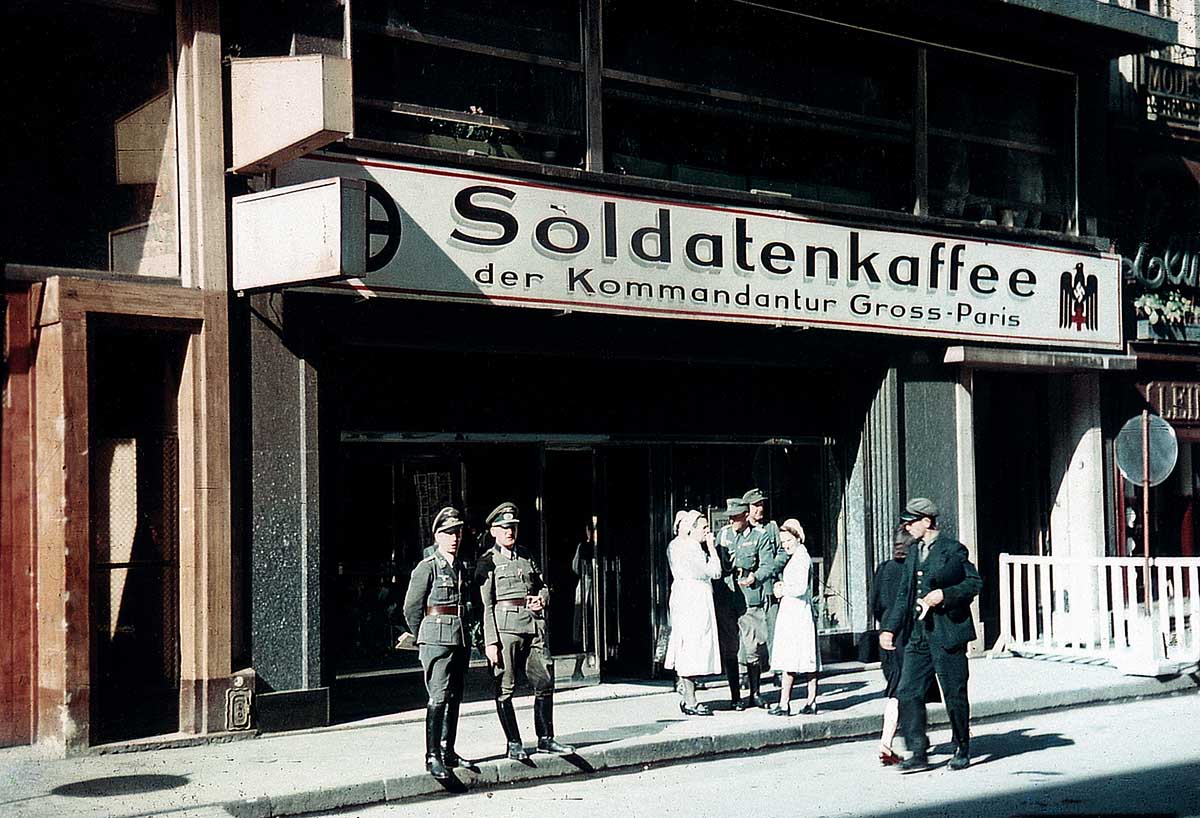 It is difficult to forget a work of history that begins with a discussion of the author’s dental history and ends with a reflection on the beret as symbol of the Vichy regime in France. Perhaps that is why Richard Cobb’s French and Germans, Germans and French has stuck with me ever since I first read it as an undergraduate student. Out of print since it was first published in 1983, this unique study of the lived experience of occupation in France during two World Wars has been reissued as a handsome paperback in Penguin’s ‘Modern Classics’ series.

French and Germans is an idiosyncratic book, but Richard Cobb was an idiosyncratic historian. Primarily known as a specialist of the French Revolution, he began his research career in Paris in the late 1930s before being called up in 1941. Having spent several years at the end of the war as an interpreter based in France, Belgium and Germany, Cobb resumed his decidedly unconventional career in 1946. Appointed to a lectureship at Aberystwyth in 1955, he proudly advertised his second, French, identity, publishing primarily in French until the late 1960s. For Cobb, a true understanding of history could not be achieved through archival research alone. Rather, in the historian David Gilmour’s words, it had to be ‘walked, observed, smelt, drunk’ in Paris and elsewhere.

Cobb’s study of France under occupation was published towards the end of his academic career, appearing in the same year as the first volume of his memoirs, Still Life: Sketches from a Tunbridge Wells Childhood. The book began life as a series of lectures on occupied France delivered in Britain and America, each one fuelled by a pint of Guinness, which Cobb sipped throughout as he warmed to his theme.

French and Germans is not the product of the kind of marathon archival research that underpins much of Cobb’s other work – nor does it pretend to be. Cobb described the book as ‘a personal interpretation’, a provocation to further research rather than the last word on the subject. The book is divided into two parts: a single chapter on occupants and occupés in the department of the Nord during the First World War and four more substantial chapters on occupation and collaboration between 1940 and 1944. Cobb’s evocative, if sometimes meandering, reflections draw on a range of material, including newspapers, memoirs, novels and personal recollections, as well as the historian’s own imagination. Cobb was not afraid to acknowledge the part played by his own experience of France at war in shaping his historical reflections. As he saw it, it was impossible ‘to divorce history from experience’.

Cobb’s book was a response to a significant shift in historical and cultural understandings of the Occupation and the Vichy regime, which began in the late 1960s. The French filmmaker Marcel Ophuls’ seminal 1969 documentary The Sorrow and the Pity revealed the complexity of collaboration and resistance in the town of Clermont-Ferrand. The film inaugurated what the French historian Henry Rousso would later describe as the ‘broken mirror’, as the old certainties of de Gaulle’s ‘eternal France’ were challenged. Instead of a nation united in resistance to the occupier and the illegitimate Vichy government, a rather different picture of wartime France began to emerge. As Cobb notes in the bibliographical essay at the end of French and Germans, work by Anglophone scholars was central to this shift. Among them were Robert Paxton, whose 1972 book Vichy France: Old Guard and New Order sent shockwaves through France and demonstrated the scale of willing collaboration between Vichy and the Nazis; and Rod Kedward, whose 1978 work Resistance in Vichy France marked a turning point in the historiography of the French Resistance.

What marks French and Germans as a classic work of history, above all, is its evocation of occupation on a human scale. Cobb was always a historian of individuals, insisting that the past could only be properly understood ‘in terms of human relationships’. This approach is at the heart of French and Germans, and gives the book warmth and intimacy. Cobb is at his best when conveying the complex relationships and interactions between the occupiers and occupied through glimpses (sometimes imagined) of their shared existence. Cobb imagines a working-class French woman in a relationship with a German soldier, waking in the night in the spring of 1918, noticing ‘his leather belt (with Gott Mit Uns clasp)’, and hearing ‘the continuous rumble’ in the distance. Cobb is sensitive in his handling of women and their children born ‘to an unknown father’.

For Cobb, therefore, there can be no simplistic oppositions in understanding the experience of occupation in 20th-century France. As he shows, for most Frenchmen and women the overwhelming response to occupation was what Henry Rousso would later characterise as attentisme: wait and see. Did waiting and seeing equate to collaboration with the occupying Nazis? Cobb reminds us that ‘collaboration is an endlessly elastic concept’. ‘Was anyone who worked, directly or indirectly, for the Germans a collaborator?’, he asks. What of the Paris Métro driver, continuing to do his job even as he knew that his train carried ‘German, as well as French, passengers, wedged fraternally like … sardines?’ Occupation was lived not in black and white, but shades of grey.

There has been much historiographical water under the bridge since French and Germans first appeared in 1983. New evidence and innovative approaches by successive generations of historians have ensured the study of France under occupation remains vital, exciting and often provocative. There is still a place, however, for Cobb’s distinctive voice. At the start of the book, he states that his main concern is that ‘the present study … should make enjoyable reading’. And it certainly does – but, more than that, French and Germans remains a reflective and thought-provoking work that challenges readers to leave aside any assumptions that ‘it can’t happen here’. The final word goes to Cobb: ‘Let us not be deceived into believing … that the history of Vichy … has nothing to teach us.’