The Alhambra: A Sumptuous but Fragile Jewel

A comprehensive study of the Alhambra cuts through centuries of myth to give us a sense of the vibrant spectacle that greeted its original residents and diplomatic visitors. 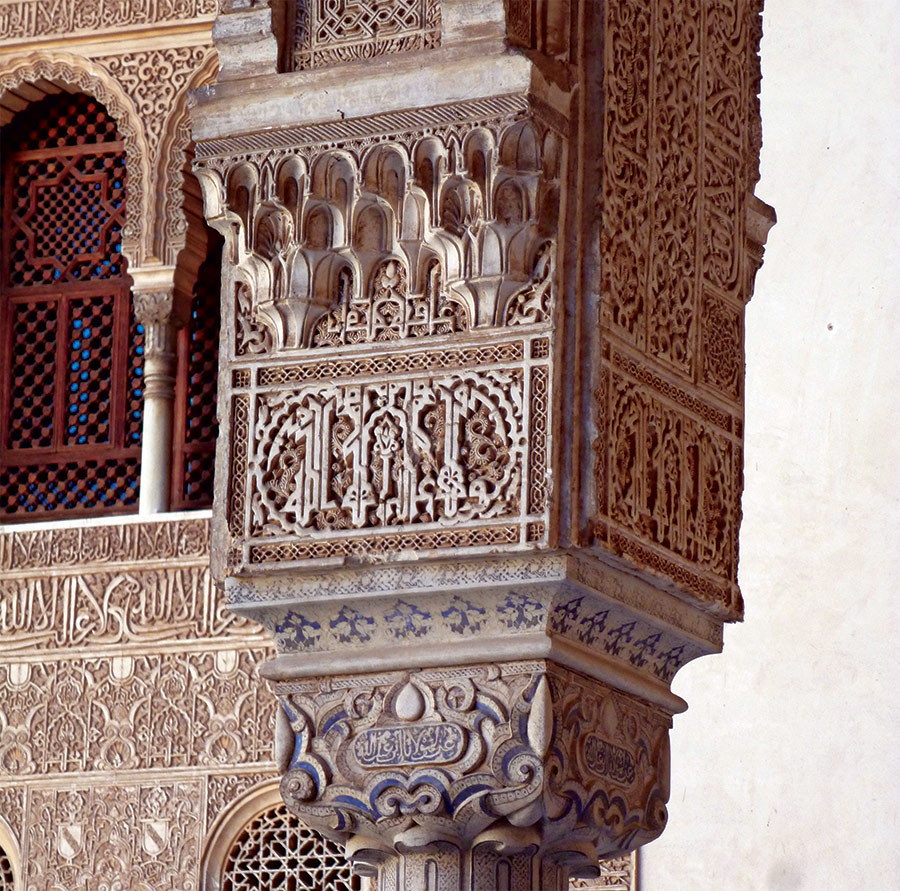 A great ship moored between the mountains and the plains [and] a monument poised uneasily between myth and reality.

So wrote Michael Jacobs of the Alhambra, the last bastion of Muslim rule in Spain, built in Granada over the course of 250 years by the Nasrid sultans, who ruled the city up to its capitulation to the Catholic Monarchs, Isabel of Castile and Ferdinand of Aragon, in January 1492.

On entering the palatine city, Isabel and Ferdinand declared: ‘This sumptuous and excellent edifice shall … be well repaired and maintained, in order that it stand forever as a perpetual memorial’ – arguably, more as a perpetual monument to their victory of Christianity over Islam than to architectural excellence. Alas, when their great-grandson, Philip II, moved his royal court to Madrid, the Alhambra started its long decline into disrepair; a state exacerbated by Napoleon’s troops in the Peninsular Wars, when it was used as a barracks. By the mid-19th century, the once sumptuous palaces were home to squatters, including wealthy  Grand Tour travellers, such as, in 1829, the American writer Washington Irving, whose book on his sojourn developed many of the Alhambra’s popular romantic myths.

Olga Bush’s extensively researched Reframing the Alhambra brilliantly cuts through the centuries of myths to radically reposition our understanding and interpretation of the Alhambra’s buildings. It endeavours to give us the ‘period eye’ of the original architects and the royal residents who were responsible for its construction.

Bush tells us that, under the Nasrids, the now largely off-white interiors of the Alhambra, ‘shimmered with vibrant colours: doors, ceilings, and great expanses of walls were vividly painted … light reflected in and refracted from the various coloured surfaces of the architectural decoration … In sum, the impact of colour was crucial to the aesthetic experience’. Bush skilfully combines the theories behind Ibn al-Haytham’s widely read 12th-century treatise, the Book of Optics, with recent findings in neuroscience and the psychology of visual perception, together with crystallographic analyses of the original delicate pigments. This gives us valuable insights into the sophisticated techniques and aesthetic values of the Alhambra’s original artists and viewers.

Moving on to the poetic inscriptions that cover almost every wall, Bush builds on the foundational work of José Miguel Puerta Vílchez, whose Reading the Alhambra (2011) first fully translated the building’s thousands of inscriptions. While the multitude of colours in the Alhambra introduced a dazzling dynamic effect on the beholder, the poetry produced moments of arrest, just as one inscription implored, ‘You who enter, stop [and] for God’s sake, contemplate’. As Bush states, the beholder ‘mediated between an initial perception of beauty and a more contemplative appreciation of meaning’, viewing the many inscriptions extolling the actions and power of the sultan (and that of God, of course). This imbued the visitor with the veneration appropriate for a royal audience.

After closely studying the complex geometry behind the architectural masses and the intricate designs of the glazed wall tiles, Bush ‘redresses’ the Alhambra with its rich original textiles, furniture and works of art, many of which are now scattered across the globe. These all enriched the ceremonial spaces of the Alhambra, such as the Comares Palace. The Alhambra thus dressed, Bush writes, would have considerably added to the dignity of a royal audience and made it more awe-inspiring.

Bush gives us little on the sensual, olfactory delights of the paradisiacal gardens of the Alhambra, or the religious significance of the channelled ‘rivers’ of water in its numerous courtyards, or the difficulties of getting endless supplies of water on to the crown of the hill on which the Alhambra sits, but these are areas tackled elsewhere by writers such as Dede Fairchild Ruggles. Overall, though, this is a valuable contribution to the advancement of Alhambra scholarship.

Philippa Joseph is Reviews Editor of History Today and a tutor in art history at the Oxford University Department for Continuing Education.