The Age of the Club

Meet the members of the 18th-century’s most illustrious club. 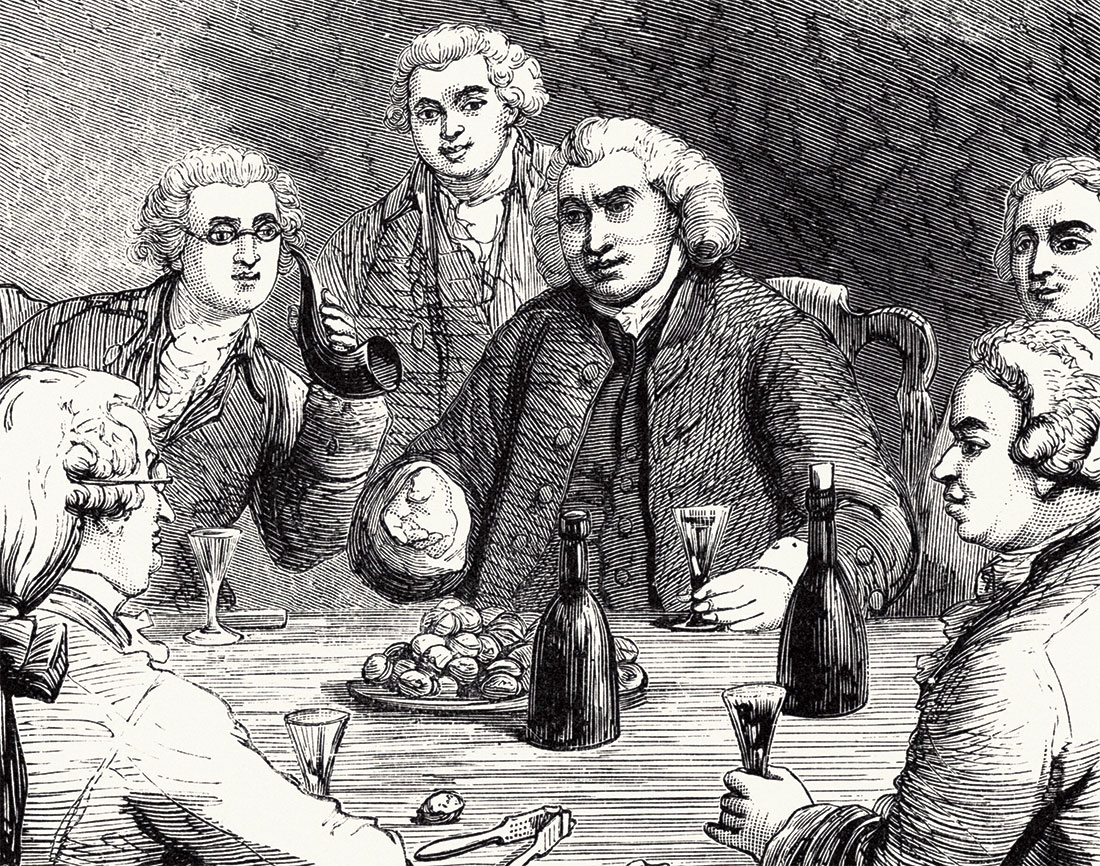 In her magnificent group biography The Lunar Men (2002), Jenny Uglow calls the 18th century the age of the club. Clubs were everywhere. There were ‘clubs for singing, clubs for drinking, clubs for farting, clubs of poets and pudding-makers and politicians’. Few clubs were as illustrious as Uglow’s subject: the Lunar Society of Birmingham. Centred around the polymath Erasmus Darwin, the flamboyant industrialist Matthew Boulton and the pioneering potter Josiah Wedgwood, they were, as her subtitle neatly put it, ‘the friends who made the future’.

For pre-eminence among clubs, the Lunar Society could be outranked by only one. That was a club that met on a Friday evening in the Turk’s Head Tavern on Gerrard Street in Soho from 1764. At its core was Samuel Johnson, who even then had established a reputation as ‘a kind of public oracle, whom everybody thought they had a right to visit and consult’. Ranged about Johnson like planets around the sun was a constellation of Georgian talent. Among them were Edmund Burke, the politician; Joshua Reynolds, the artist and founding president of the Royal Academy; David Garrick, the actor and manager of the Drury Lane Playhouse; Adam Smith, the father of modern economics; Edward Gibbon, author of The History of the Decline and Fall of the Roman Empire; and James Boswell, who we have to imagine squeezed in between them all, scribbling down the conversation. ‘The Club’, as it was unfussily known, was established to help Johnson recover from a bout of depression. For about 20 years after 1764 it was faithfully attended by a growing number of members. Johnson grew proud of it. In 1777 he announced to the writer Hester Thrale: ‘Our Club, Madam, is a society which can scarcely be matched in the world.’

Leo Damrosch sets out to do for The Club what Uglow did for the Lunar Society. Ostensibly, this is to tell the story of its conception, life and progress. But he runs up against an inevitable problem. Bar a single in-depth recreation of a club conversation by Boswell – and the marginal comments he has plucked from letters and journals – much of what occurred on those dark boozy nights at the Turk’s Head happened behind a closed door. To navigate this, Damrosch conceives his book as a group biography with The Club acting as a magnetic force at its centre. As a result, the reader is as often to find themselves striding around the Highlands with Johnson and Boswell, or in the House of Commons with Burke as they are in Gerrard Street. It is a curious characteristic of The Club that The Club is not even established until page 124.

All this would matter more if Damrosch were not such a splendid guide. An emeritus professor in literature at Harvard, known for imaginative biographies of Jonathan Swift and William Blake, he is at home in this high Georgian world. At the outset he states his ambition ‘to bring to life the teeming, noisy, contradictory, and often violent world of eighteenth-century London’ and he uses the various biographies of Club members as a portal into these histories. Through Burke we are ushered into the raucous politics of an age on the cusp of revolution. With Garrick and Richard Brinsley Sheridan we are taken on an illuminating visit into the Covent Garden theatres. And through Hester Thrale and Fanny Burney – neither of whom were Club members, as women were not permitted to join – we get a glimpse of London’s literary culture from the marginalised outside.

To exert control over so many themes and characters, Damrosch subdivides his chapters into miniature sections, gliding from ‘Hester as Therapist’ on one page to ‘The Pleasure of Travel’ and so on. This approach seems to mimic the ebb and flow of the conversations that must have taken place in the club room, with various subjects introduced, scrutinised, enlivened with anecdote and then tossed aside as the next course – or drink – comes on.

Amid much levity are more serious moments. Damrosch carefully documents Boswell’s shameful abuse of vulnerable women. He also spends considerable time on Johnson’s fragile mental health, investigating his numerous ways of alleviating the distress. In our time – one that views depression differently – there is still value in examining Johnson’s experiences: his often heroic and lonely struggles and the solace he was able to find through friendship with Hester Thrale. The Club, ultimately, was Reynolds’ idea to distract Johnson from the wild, untameable part of himself. In this superb book Damrosch replicates Reynolds’ trick. Through the stories of a dozen or so individuals who ‘clubbed’ (Johnson’s word) together for a few hours in a tavern, we can glimpse so much of the high-Georgian age. The Club for us, as it once was for Johnson, becomes a device for making sense of this exhilarating, exhausting and nervous world.

The Club: Johnson, Boswell, and the Friends Who Shaped An Age
Leo Damrosch
Yale
472pp £20

Peter Moore is the author of Endeavour: The Ship and the Attitude that Changed the World (Chatto & Windus, 2018).