Hospital or home birth has rarely been a simple choice. 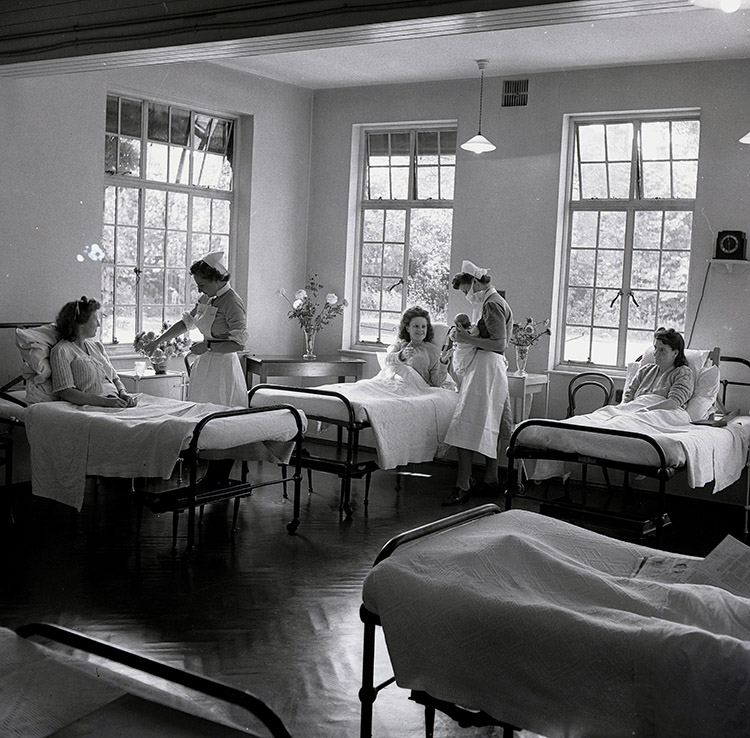 At first glance, childbirth seems to be an experience that stands outside history. The biological fact of pregnancy and labour does not change; a woman who gave birth yesterday would be able to share her story with a woman in ancient Greece, medieval France or a Victorian slum. Despite this apparent continuity, the way society views and manages birth is constantly evolving. Childbirth has always been the proving ground for wide-ranging ideas about health and illness, women, the relationship between medicine and society and about scientific and technical ideas.

Before the 20th century, birth in Britain took place primarily in domestic spaces. There were attempts to bring birth into hospitals in the Victorian period: Florence Nightingale opened a lying-in hospital and then promptly closed it down as infection swept through the wards and women who had been safely delivered died in droves.  Hospital seemed to make birth even more dangerous than it already was. But the idea of birth in an institution never went away and was revived during the Second World War. Displacement of populations meant that many women no longer had homes in which to give birth and were increasingly confined to institutions. The development of antibiotics meant that the scourge of postnatal fever was no longer so terrifying, which in turn meant that hospital wards did not have to be places of doom.

At this point, birth in hospital was a pragmatic choice for policy makers faced with the complications of war.  In the 1950s, however, the debate shifted to encompass not just the physical setting of birth – home or hospital – but a host of ideas about risk and safety, the use of technology and the management of healthcare under the National Health Service. The general consensus among obstetricians was that the physical safety of mother and baby was the primary goal of the maternity services. This was best achieved, they argued, in hospital, where obstetricians could oversee labour and birth. Government committees appointed to consider the state of the maternity services took evidence from obstetricians and agreed that hospital birth should be promoted by policy. In 1959 the official view was that 70 per cent of women should have their babies in hospital. By 1970, policy stated that there should be enough provision for all women to have a hospital birth. Practice seemed to follow policy.

In 1960 35 per cent of births took place at home. By the late 1970s this had fallen to one per cent; the policy of shifting birth to hospital had succeeded and obstetricians had got what they had wished for. So far, so clear. Doctors said hospital birth was safer than home birth, policy makers supported their argument and policy became practice. However, both the policy and the evidence behind it have been subject to challenge. This has come primarily from feminist researchers who argue that the largely male obstetric profession indulged in a power grab, wresting birth from its rightful place in the domestic sphere, controlled by female midwives, and putting it in hospital where it could be managed by male doctors. Not for nothing was one of the most influential histories of midwifery in the UK, first published in 1977, subtitled ‘a history of the struggle for the control of childbirth’. The struggle, of course, was between doctors and midwives.  Women, when they appeared in the discussion at all, were painted as helpless victims of a masculine takeover of birth. 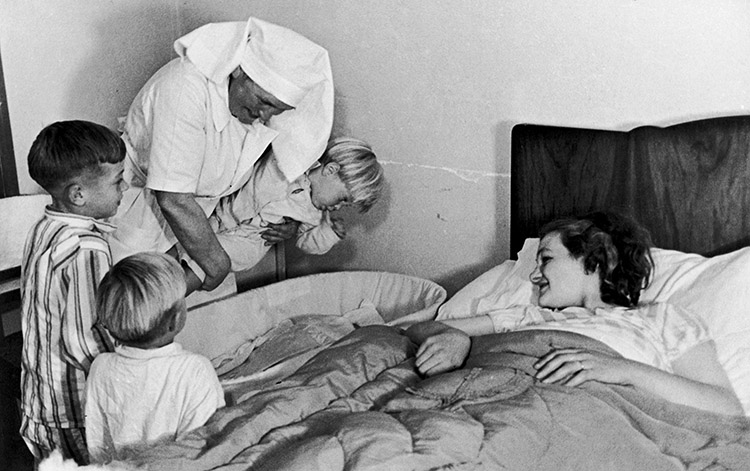 The evidence, however, demonstrates that this was not the whole story. Women fought for the births they wanted. For some women this meant home birth, for others it meant hospital. From the late 1940s onwards, demand for hospital births outstripped the supply of beds across swathes of the country. In the 1950s, midwives in Sheffield and London recommended that women book a hospital bed for birth within the first few weeks of pregnancy. In Nottingham and Derby the local health authority attempted to remind women of the advantages of home birth over hospital birth, to little avail. By 1960 there was a debate in London about whether all women should have access to hospital beds; this was not for medical reasons but because women increasingly felt that they were ‘entitled’ to a hospital bed. Ten years later hospital births had to be rationed in rural areas like Suffolk; anyone who had previously had a normal birth had to have their next baby at home, whether they wanted it or not. Policy around place of birth was behind practice rather than driving it.

Women wanted hospital birth for a variety of reasons. Often it was because hospital meant that they would be offered pain relief, which they did not necessarily get at home. More than that, women increasingly demanded access to the technology which was becoming available. Epidural anaesthesia, induction of labour and foetal monitoring were only obtainable in a hospital setting. There were downsides, which were acknowledged; a lack of privacy and peace in hospital and a greater risk of obstetric intervention. But it is simplistic to say that women were pushed into hospital birth. For many women the advantages of hospital birth outweighed the disadvantages.

From the mid-1990s onwards government policy has swung back in favour of encouraging home birth for at least some groups of women, but the impact on practice has been minimal. The shift from home to hospital in the 1960s and 1970s was quick and decisive. The shift back again seems almost impossible to effect. This is partly because of the power of messages from doctors and policy makers about risk and safety in relation to place of birth. Two generations have absorbed the idea that birth is only normal in retrospect and hospital births are warranted ‘just in case’. But to suggest that women were frightened into hospital birth is too simplistic. Birth is an individual act and the decisions made by women and families are multi-faceted. A more nuanced reading of the historical evidence reminds us that many women demanded and fought for hospital birth, with policy makers, doctors and hospital builders left scrabbling to catch up. Understanding this may help to tease out the reasons why telling women that home birth is now a good idea will not necessarily change minds.

Tania McIntosh is a qualified midwife and a historian of childbirth based at the University of Brighton.