The Personal Cost of Jutland

On the centenary of the Battle of Jutland, it is important to remember that the losses were not just felt during the engagements but at home, too, as the story of Joseph Burns and his young family shows. 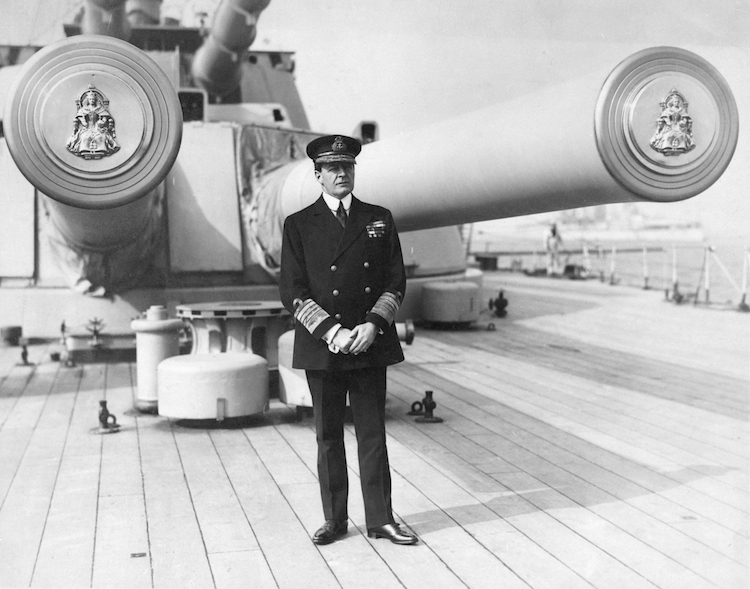 On May 31st, 1916 the main British and German battle fleets engaged each other in the North Sea off the coast of Denmark. Remembered as ‘Jutland’ by the British and ‘Skagerrak’ by the Germans, this enormous battle involved 279 ships and was the largest naval engagement of the First World War. Both sides suffered heavy losses of ships and men and the result was one of the most keenly felt disappointments of the war, with neither side achieving a decisive victory.

But the loss was not just felt militarily and strategically. The loss of men had a personal cost to those they left behind, too. A fund was set up to provide assistance for the widows and orphans of men who had died serving aboard HMS Queen Mary, part of the Battle Cruiser Force at Jutland. The fund had been set up by Lady Beatty, the wife of the Force’s commander, Admiral Sir David Beatty. While primarily a record of the assistance rendered to recipients, the Fund’s logbook also contains details that paint a stark picture of how difficult life could be for families who had lost a loved one. A particularly poignant example is the case of the Burns family, whose plight is documented in some detail in the logbook.

In mid-1916, 30-year-old Joseph Burns was serving aboard the battle cruiser HMS Queen Mary, at that time based with her squadron mates at Rosyth. At their home in West Hartlepool was Joseph’s 34-year-old wife, Hannah. Their 12-year marriage had seen the arrival of three children: 12-year-old James, seven-year-old Joseph and three-year-old Margaret. Hannah suffered from poor health and a weak heart, and in Joseph’s absence her father John Short was helping to care for the three children. When Beatty’s squadron departed Rosyth on the evening of May 30th to join the rest of the Grand Fleet on a planned North Sea sweep, Hannah was three months pregnant.

Although no record survives of the Burns family’s personal impressions of their experience of the war, there is enough general information to allow for some cautious observations. Joseph’s role in the armed services would have involved long periods of separation from his family, although the apparent lack of fighting at sea relative to the battles on land might have been of some small comfort to them. HMS Queen Mary had seen a comparatively quiet war, for although she had been present at the battle of the Heligoland Bight in August 1914 she had not been seriously tested in action, and due to its undergoing minor repairs had missed the battle of Dogger Bank in January 1915. This lack of major naval combat was a consequence of the necessarily cautious strategies adopted by the British and German navies, but was a deep source of frustration to the men on both sides. Many had expected a decisive showdown at sea within days of war being declared and, for the Royal Navy, audacious German raids on British coastal towns had stung. These raids must have been a source of deep anxiety for Joseph as well, especially as West Hartlepool had been one of the first towns to suffer German naval bombardment on December 16th, 1914.

As a stoker aboard a coal-hungry battle cruiser, Joseph’s working life was dominated by regular bouts of physically demanding work. Although the all-too-frequent business of coaling ship in port was a task for the entire crew, the men in other branches at least had the comparative luxury of being able to return to pleasanter duties when that task was done. For the stokers, getting coal from the bunkers to the ship’s boilers was their raison d’etre. By necessity, Joseph’s station would have been below the waterline, deep within the bowels of the ship. Describing the conditions in a battle cruiser’s boiler rooms, a contemporary Midshipman wrote of ‘black, begrimed and sweating men working in the ship’s side’ in a scene that ‘had all the appearance of one from Dante’s Inferno’. Should the worst happen to the ship in battle, Joseph and his fellow stokers would have had little chance of escape. To what degree these anxieties were occupying Joseph’s thoughts in the early hours of May 31st will never be known.

At about 14:15 that afternoon, Admiral Beatty’s ships were the southernmost group of British warships in the North Sea. In keeping with the overall British plan, Beatty was about to turn northwards to join the main body of the Grand Fleet. Before he was able to do so, one of the light cruisers screening his force sighted a Danish merchant ship, and on approaching to investigate came across a German destroyer engaged on the same mission. The German ship was part of the light forces scouting for the battle cruisers of Admiral Franz Hipper’s I Scouting Group, their equivalent of Beatty’s Battle Cruiser Force. The subsequent fighting between the light screening forces brought both sides’ battle cruisers onto the scene, mutual sighting taking place at about 15:25. Sensing an opportunity to lure the British warships towards his supporting battle fleet – and, hopefully, towards their destruction – Hipper turned his ships to the south-east. Beatty needed little encouragement to follow and in short order the rival battle cruisers were steaming in a southerly direction at full speed, exchanging fire at long range.

This first phase of the battle has come to be known as the Run to the South, and was, on the whole, highly successful for the Germans. When fire was opened at 15:48, Beatty appeared to have the advantage. He had six battle cruisers under his command against five German, and while the two most powerful German ships mounted 12-inch guns, four of his ships mounted the more powerful 13.5-inch weapons. Visibility, however, did not favour the British at this stage and it was the Germans who opened fire first. To make matters worse for Beatty, German fire proved far more accurate than that of the British. Fifteen minutes into the engagement HMS Indefatigable sustained a series of hits from SMS Von der Tann. These had catastrophic consequences for the British ship, which exploded and sank with the loss of 1,017 men. Worse was to come. At 16:22 shells from either SMS Derfflinger or SMS Seydlitz struck HMS Queen Mary, setting off another disastrous explosion which destroyed the ship and killed 1,266 men. Among the dead was Joseph Burns, who would have been at his station with his fellows, working furiously to maintain Queen Mary’s full speed. Given their complete isolation from events outside their compartment, it is unlikely they would have been aware of the catastrophe overtaking their vessel until it was far too late. Joseph Burns’ participation in the long-awaited sea battle had lasted barely two hours.

Jutland was the single costliest naval battle of the First World War. On returning to port, each side attempted to take stock of what had proved a highly confusing action. In terms of losses inflicted, the Germans had grounds for claiming a tactical victory. Fourteen British ships had been sunk and 26 damaged, compared to eleven sunk and 30 damaged on the German side. Total British casualties – including captured survivors – came to 6,945 compared to 3,058 German. To nations trying to come to terms with the casualty lists being generated in other theatres of war, and particularly on the Western Front, the blood price for Jutland was relatively ‘cheap’. Strategically, the German effort to critically weaken the Grand Fleet without suffering serious loss to itself had proved a failure. In any case, with German attention diverted by the Russian Brusilov offensive a week later and British by the Somme offensive in July, Jutland quickly disappeared from the headlines.

The strategic implications of the battle and both sides’ subsequent claims of victory would have been of little comfort to bereaved families on both sides of the North Sea. Those who had lost their menfolk had not only to deal with the immense personal grief that attends such loss but also, in many cases, a financially uncertain future. Official support for the families of the dead was practically non-existent and much depended on the work of informal support networks and charities such as Lady Beatty’s Fund to provide support. The Fund certainly proved a godsend to the desperate Hannah Burns, who applied to it for help in December 1916, very shortly after the birth of her fourth child, David. The logbook notes ‘Mrs. Burns has written to say that she is in great trouble and in need of help. She suffers from a weak heart and has had no assistance from anywhere.’ The reaction to Hannah’s letter was commendably swift, with £2 (just under £200 in today’s money) being sent to her immediately. The Fund’s representatives also sought confirmation from the local Roman Catholic clergyman, Father Drea, as to Hannah’s status. Father Drea responded in writing that Hannah was ‘a deserving case’, and the logbook specifically records his observation that ‘her poverty is apparent’. A monthly allowance of £1 per month for an initial period of six months was arranged.

Despite the receipt of immediate assistance, the lot of the Burns family did not improve. Within another month James Burns was very ill with consumption (tuberculosis). A further grant of £2 was made to secure him warm clothing and Lady Beatty undertook to pay for his treatment at a sanatorium. Hannah’s own health had been deteriorating badly and she died in late March 1917. The Fund arranged for the children to go to the Aberlour Orphanage in Scotland, a well-known charitable institution with an emphasis on educating its young charges. Money was forwarded for the children to travel there from West Hartlepool in the care of Hannah’s sister. David was adopted by a Mrs McLaren at the tender age of four months and his three older siblings were on the orphanage’s books from mid-April 1917. Lady Beatty’s Fund records continued payment of the orphanage fees up to September 1918.

The experience of the Burns family is just one example of the devastating effect that the War could have on those whose lives were caught up in its maelstrom, both on the field of battle and outside it. Most of the 10,000 men killed or wounded at Jutland would have had relations and dependents who were deeply affected on a personal and practical level by the tragedies that overtook their husbands, fathers or brothers. The centenary of the Battle of Jutland, and the on-going commemorations of the First World War as a whole, mark an appropriate time to research and bring these deeply moving stories to light.

Andrew Choong Han Lin is the curator of Jutland 1916: WWI’s Greatest Sea Battle at the National Maritime Museum, which runs from May 20th, 2016 to November 2018.