In commissioning her biography, Emma, wife to two kings of England, created a subtle yet audacious piece of propaganda, used to maintain her position and secure her reputation. 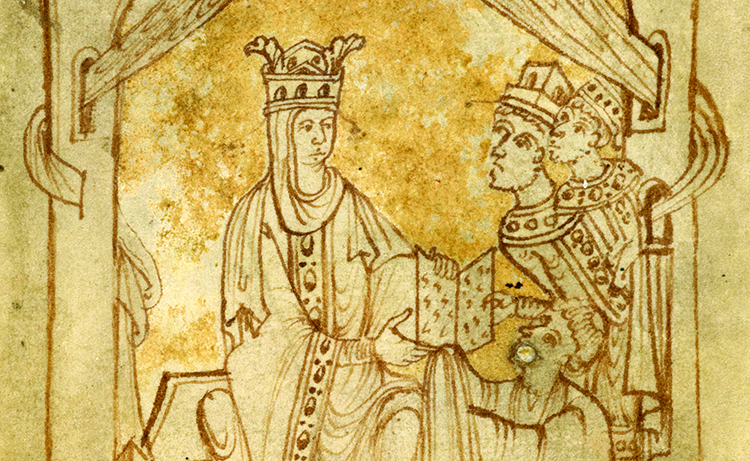 A marriage took place 1,000 years ago this summer, which began one of the most intriguing partnerships in medieval history. In 1017 the young Danish king Cnut, who had conquered England just a few months earlier, summoned Emma, widow of his former enemy, King Æthelred, and married her. Emma, daughter of the Duke of Normandy, had been married to Æthelred from 1002 until his death in 1016. By the time of her second marriage she had considerable experience of English politics: much more than her new husband, an untested king who was probably at least a decade younger than Emma. Their union was mutually beneficial: Emma secured a powerful position for herself, while Cnut gained a useful alliance with Normandy.

Emma played an influential role during Cnut’s reign, survived him and remained a formidable force in English politics until her own death in 1052. This alone makes her a fascinating figure, unique in being the queen of two very different kings of England and mother of two more. Just as remarkable is that she also commissioned her own history of the events she had lived through, making her perhaps the first woman in England to participate so actively in the writing of history. This text, the Encomium Emmae Reginae, was written in 1041-2 during the brief reign of Harthacnut, Emma’s son by Cnut. The anonymous author seems to have worked from information provided by Emma and others at court. The Encomium is an extraordinary text: part history, part memorial, part justification for Emma’s actions. It is a precious source for 11th-century English and Scandinavian history, as well as for Emma’s long and turbulent life.

It is not a biography of Emma; it is something more complex and interesting than that. Written in part to support the legitimacy of Harthacnut’s reign, the Encomium takes its shape from the course of Danish rule over England. Its first book describes how Cnut and his father Svein set out to conquer England in 1013, while the second is a brief account of Cnut’s 20-year reign. The third tells of the political crisis which followed Cnut’s death in 1035, brought to an end by the accession of Harthacnut. The three books thus correspond to three generations of Danish rulers of England, the dynasty with which Emma, the Norman-born widow of an English king, had clearly identified her interests. As queen to one king and mother to another, she was at the very heart of this dynastic story.

It is hard to think of anyone in a better position to witness and influence events in England throughout the first half of the 11th century. Yet the story as told by the Encomium is partial and tantalisingly selective, omitting several significant facts. Emma’s first marriage, to Æthelred, is ignored, completely written out of history.  The text manages to give the impression that Emma’s sons by Æthelred (including the future Edward the Confessor) were Cnut’s children. These omissions are audacious, amounting to a deliberately misleading rewriting of events.

The account of Emma’s marriage to Cnut in 1017 is a striking example. The Anglo-Saxon Chronicle’s language in its entry for that year is blunt: the new king had Emma ‘fetched’ to be his wife. But the Encomium tells a much more romantic tale (in every sense of that word). Once secure as king of England, it claims, Cnut lacked nothing but a suitable wife, so he sent messengers far and wide throughout Europe to seek out a worthy bride. At last he heard of a Norman lady, nobly born, wise and beautiful and he greatly desired her. He sent gifts and messages to woo her to be his wife and Emma consented (making her own conditions about the inheritance of their future sons). Both were delighted, while all England and Normandy celebrated a marriage that brought peace and rejoicing.

Perhaps it really did happen like that in 1017, but more likely Emma understood the value of claiming that it had. This text is all the more interesting for its slanted perspective, much as we might wish that we could access more of Emma’s real experiences. Emma was a woman in a fraught situation, negotiating a place between her royal husbands, sons and stepsons. Her version of history suggests how she managed to make herself indispensable. The Encomium reveals an active and forceful medieval woman participating in the writing of history, reshaping the story of her own life in a way that suited her interests.