Wild is the Wolf

What’s the difference between man’s best friend and the ‘enemy of all society’? In the decades before Darwin, the distinction between the domestic dog and its feared wild ancestor was absolute. 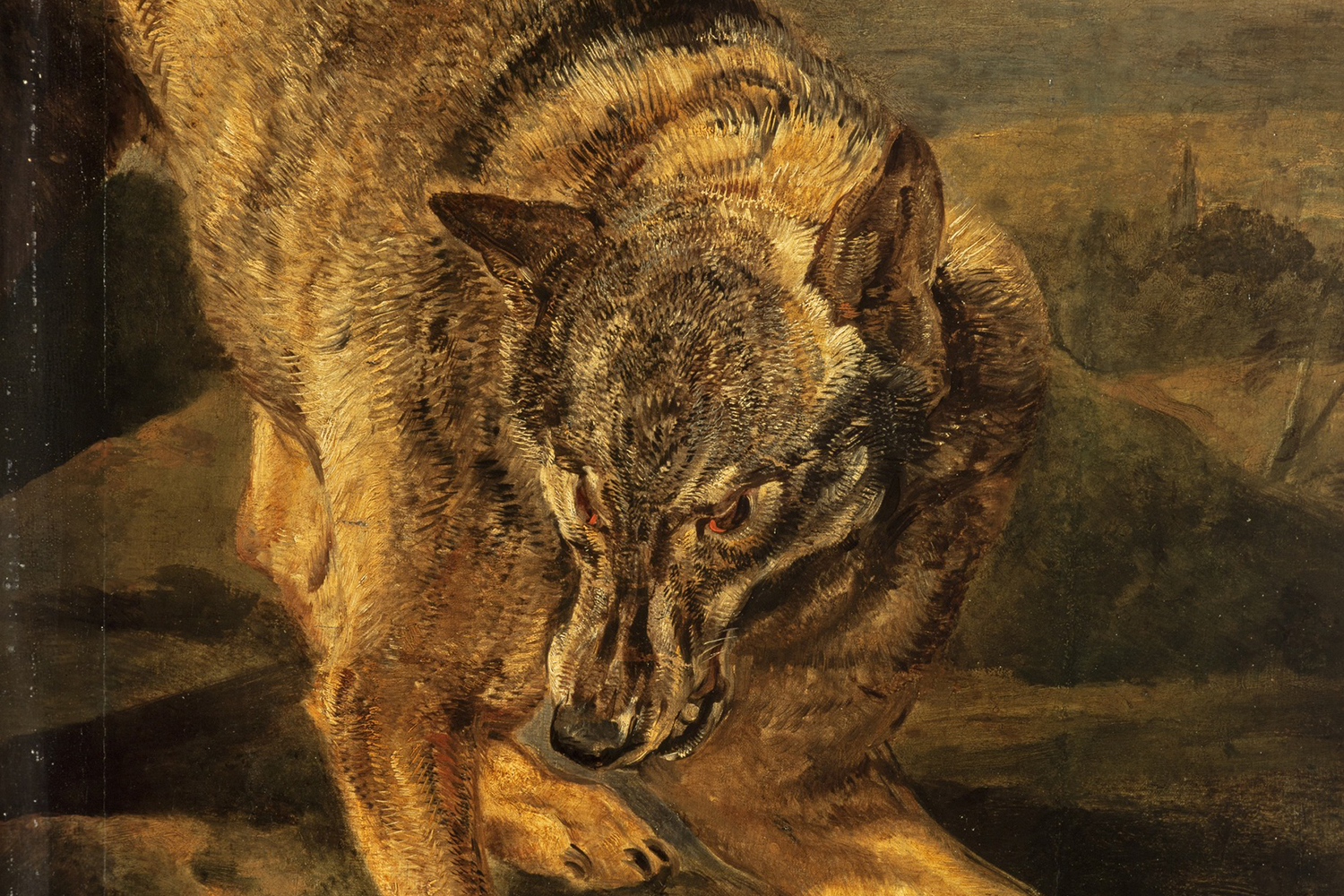 For over a decade during the late 18th century, a wolf stalked the estate of the Earl of Pembroke in Wilton, Wiltshire. Wolves were not commonly seen roaming the grounds of England’s stately homes, though the nobility and gentry enjoyed keeping menageries of exotic creatures when they could. Having been extinct in Britain for centuries (if not millennia), the wolf was certainly an unusual creature. This particular wolf, however, was not wild, nor part of a menagerie; her name was Lupa and she seems to have been thought of as more of a pet.

Lupa was born in 1770 and, once weaned, was given to the Earl of Pembroke. She had her own keeper, Nathaniel Townsend, who was paid between £1 and £2 every few months for ‘the keeping of the wolf-bitch’. Lupa was kept separately from the other hounds, perhaps in case of aggression between them, and it is unlikely that she lived in the house. She reportedly had four litters of puppies, one of which is recorded in the household accounts in 1773. At the time of her death, Lupa was 12 years old and like many of the family’s pets was buried in the gardens of Wilton House with a headstone. All evidence we have for Lupa’s existence refers to her as either a wolf or wolf-bitch, but the epitaph that was inscribed on her headstone makes it clear what Lupa really was: a wolf-dog hybrid.

Whose grandmother was a wolf

Whose father and grandfather were dogs, and whose

Mother was half wolf and half dog. She died

Lupa’s origins are detailed in letters from George Augustus Herbert, later 11th Earl of Pembroke, to John Hunter, surgeon, and from James Hamilton, 2nd Earl of Clanbrassil to Sir Joseph Banks, naturalist. The letters cast some doubt as to whether it was Lupa’s grandmother or grandfather who was the wolf. Regardless, the letters also reveal that she and her siblings were the result of an experiment performed by Joshua Brookes, menagerie owner and animal dealer in London, at the behest of Hamilton, in around 1770. Brookes owned a wolf and reportedly bred it with a Pomeranian bitch. This unlikely coupling resulted in nine puppies. One of these went to Hamilton, who crossed this half-wolf with ‘a pointer’, producing a litter of ten puppies. One of those was Lupa. 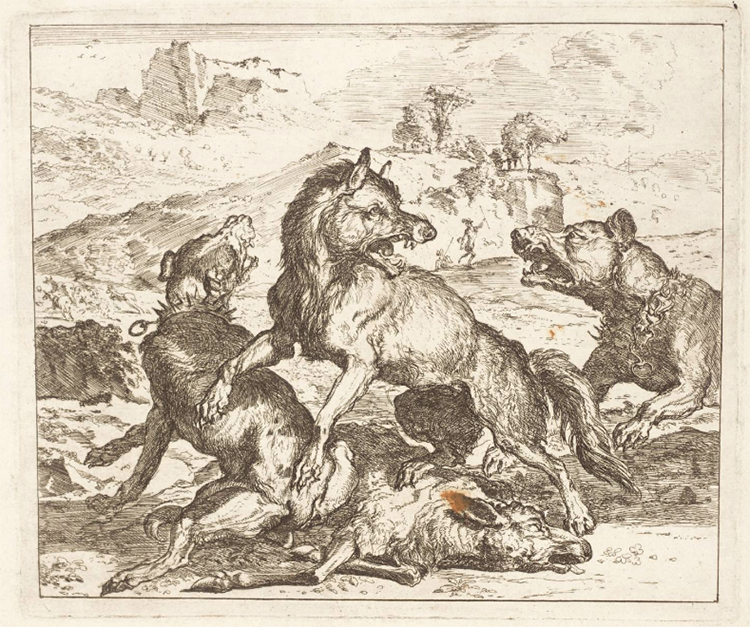 The letters form part of an article published in 1787 in the Philosophical Transactions of the Royal Society, written by John Hunter, titled Observations tending to shew that the Wolf,  Jackal and Dog, are all of the same species. Hunter was one of two Scottish brothers, famous anatomists in London. The Hunterian, the museum of the Royal College of Surgeons, is named for him, and its collection retains many of his specimens, including some wolf. Hunter was interested in exploring anatomy through dissection, which he performed on human subjects as well as (sometimes live) animals. He was well known to the animal dealers of London, who regularly supplied him with both live animals and animal corpses. In his article Hunter demonstrates an interest, like many people at the time, in the classification of animals. To this end he investigated the relationship between dogs and wolves, obtaining one of Lupa’s aunts from Brookes for ‘observations and experiment’.

Brookes was not the only breeder to dabble in wolf and dog hybrids. William Gough of Holborn Hill, London, kept a wolf bitch chained at his premises. He facilitated a mating with a greyhound dog which resulted in four puppies, one of whom was earmarked for Hunter and his investigations. After one puppy went with its new owner to the East Indies, the rest of the litter were ‘killed by a leopard’. Such was the price for keeping wild animals in close quarters.

General interest in creating a typology of animals was driven by the divide between nature and culture that emerged in the Enlightenment during the late-17th and 18th centuries. Nature was something to be studied, observed, dissected and understood. It was only 12 years before Lupa was born that the Swedish zoologist Carl Linnaeus’ most important work had appeared, the 10th edition of Systema Naturae. In it, Linnaeus laid out the classification of the animal kingdom, giving the world a system for naming plants and animals by genus and species. But while this laid the foundation of the taxonomic system of understanding the natural world that we still use today, general attitudes towards animals were very different. 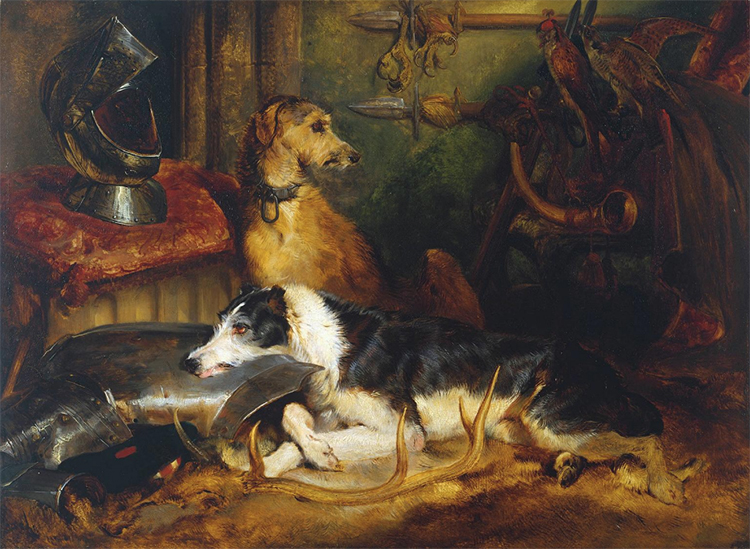 That Lupa was considered a ‘wolf’ – when in fact she was at most a quarter wolf – is telling. At the time, many natural historians did not believe dogs and wolves were of the same root. They certainly could not be considered the same animal. The French natural historian Comte de Buffon thought that those who believed in such a connection between the wolf and the dog were simply ‘nomenclators … who have only a superficial knowledge of Nature’. Hunter’s article argued that although their behaviour was different, the jackal and the wolf could both breed with a dog and therefore were the same species. This argument is simplistic – and the debate was perhaps not entirely serious – but Charles Darwin’s Origin of Species and Gregor Mendel’s theories on genetics and inheritance were both over 80 years away. Scientific understanding of the biology behind animals was inchoate.

In order to understand Lupa and her cross-breed kin, we should consider the relationship that people had with dogs at the time. The long history of domestication from the wolf had, by the 18th century, resulted in disparate groups of animals of the same species that had different traits. Dogs may have had similar appearances or behavioural traits to their modern counterparts, but they are not really the same, not even in their genes. The concept of a pure breed or pedigree dog is a Victorian invention; a new zeal for the shaping of animal bodies and showing of the product resulted in the creation of the Kennel Club in 1859.

Robert Bakewell, a farmer, had popularised a method of breeding cattle, horses and sheep in the 18th century by deliberately selecting animals for breeding that had desirable traits, subsequently continuing to breed from those that were most successful in passing these traits to their offspring. The method included a great deal of inbreeding. Modern dog breeds were thereby created by keeping a register of dogs of particular types and then omitting dogs bred from outside of the register. The gene pool was closed for business. This meant that only a small selection of Victorian dogs became the progenitors of modern dogs and subsequent population loss in the Second World War depleted the number of possible ancestors further.

Prior to the 19th century, the concept of dog breed was loose. Greyhounds might be dogs that were fast, lean, long-nosed and hunted by sight, just like today, but there was no standard for the type. What might be considered a greyhound is likely to have been much more variable than it is today, in terms of size, coat and other features such as ear shape. Although they may have been referred to as breeds, types or sorts, the boundaries between groups of dogs was blurred. In effect, all dogs were mongrels. A good modern equivalent is the lurcher. Lurchers are not a breed of dog, but rather a cross between a sighthound and another type, usually a working dog. As such, the variability in lurchers is huge and there is no particular standard. What all dogs had in common was that they were domestic animals, who worked with humans to fulfill particular needs, whether that was hauling, hunting or as house pets. 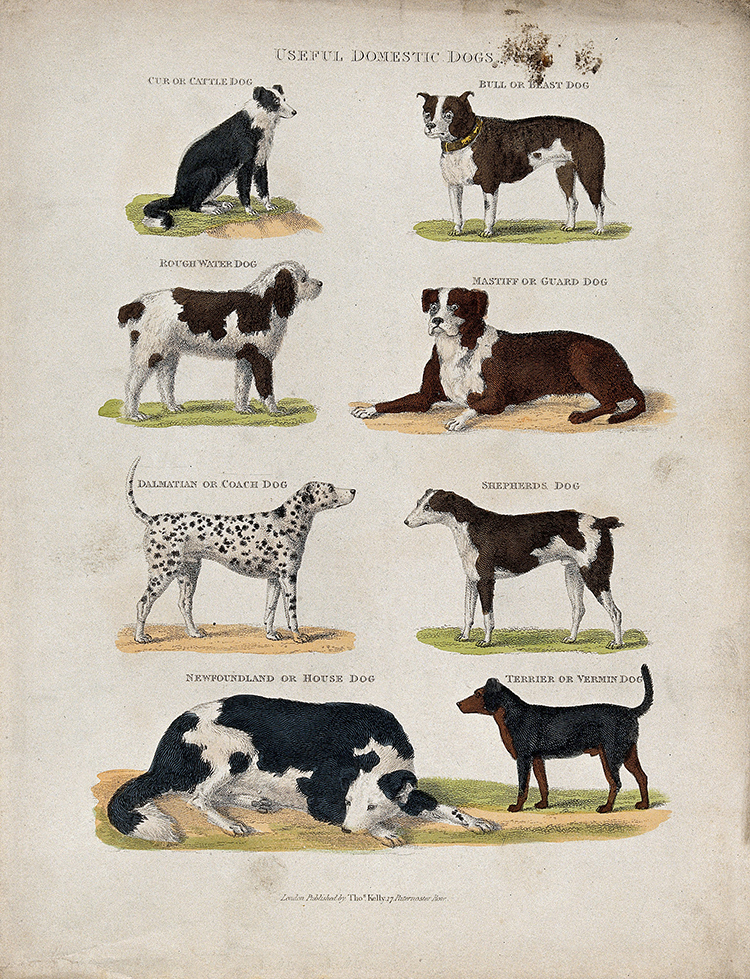 Back in London, William Gough used the declaration in Hunter’s article – of the link between wolves, dogs and jackals – as an advert. In 1789 he declared that the ‘famous Wolf Bitch has pupped for the fourth time’, and that she was proof that the wolf was ‘the original … from the Greyhound to the Mastiff, to all the varieties of Pugs and lap dogs’. From the numbers of puppies bred from Brookes’ and Gough’s wolves alone, there were clearly quite a few wolf-dog hybrids in London and elsewhere.

Attitudes to these wolf-dogs were variable. The vast majority of people in England would never have seen a real wolf, though they were often displayed in menageries for the curious. In the absence of the real thing, the wolf had a firm place in popular imagination. On 11 May 1774, the Daily Advertiser featured an advert for a ‘large rough Dog, of the Wolf Kind’, answering to the name of Wolf, lost from Drury Lane a few days previously. A five-shilling reward was offered for its return, while ‘whoever detains him shall be prosecuted’. Whether or not this dog was a wolf, hybrid, or wolfhound is unclear, but it may not be important; the wolf had legendary status and this may explain why Lupa and other hybrids were considered wolves. Indeed, any dog displaying wolfish characteristics constituted ‘a wolf’. Lupa’s aunt, Hunter’s wolf-dog, had been stoned to death in the street in the early 1770s, taken for a ‘mad dog’. In the countryside, rogue dogs attacking livestock were referred to as wolves.

True wilderness had not been seen in England in living memory. Intensifying landscape management from the medieval period onwards had led to a countryside that was no longer inhabited by animals such as bears. Even deer – established country stalwarts – had suffered a large drop in numbers. Great estates – like that at Wilton House – had thrown out geometric gardens and were creating swathes of ‘naturalised’ landscape parks, though in reality these were intensively managed environments. The wild was not something most people could encounter, causing anxiety about what a world free from human control would be like. 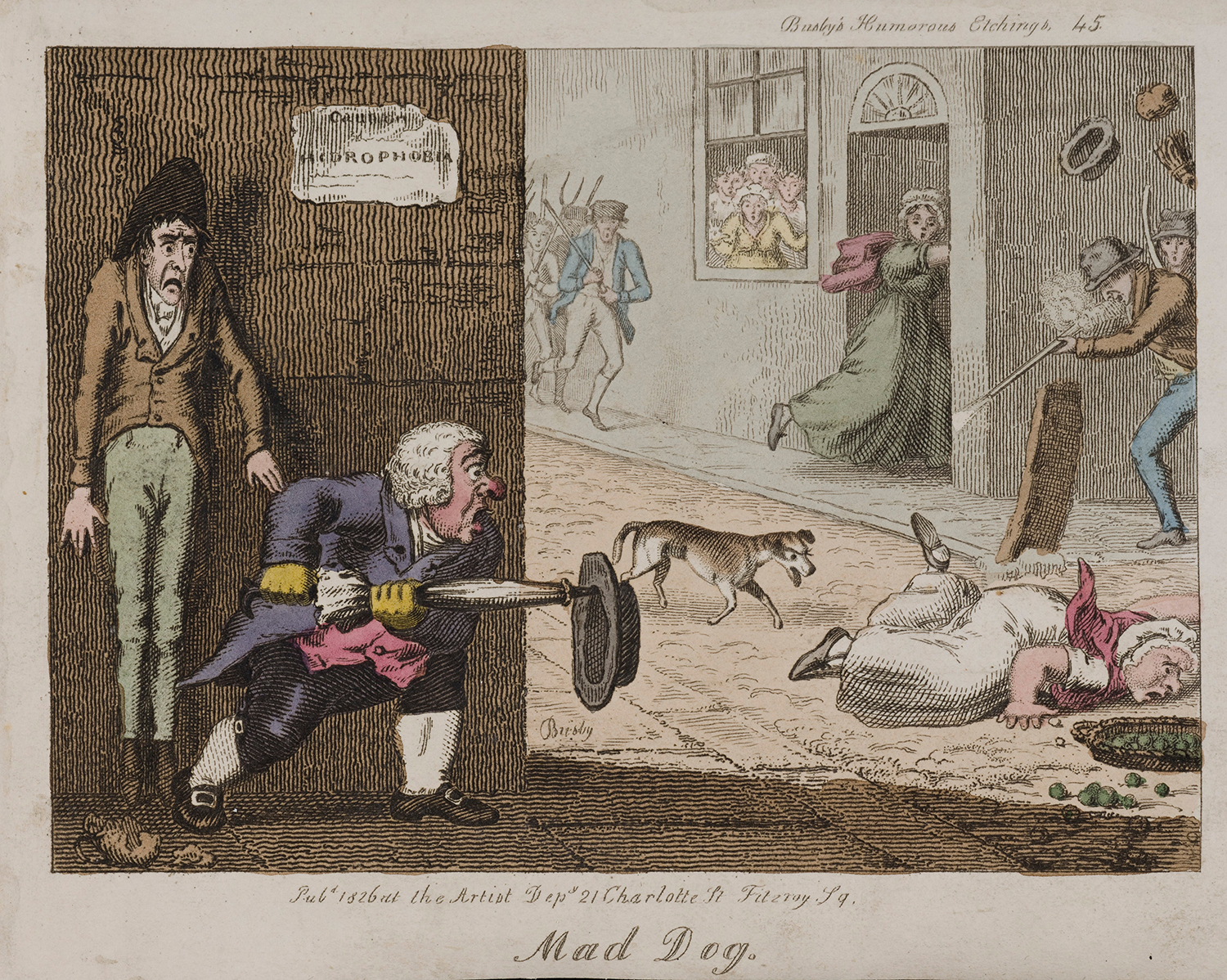 The wolf epitomised this lawless and dangerous realm. Comte de Buffon’s Natural History: general and particular described the wolf as ‘the enemy to all society’ and is filled with stories from France of people winning fights against ravenous wolves that threatened to eat their flocks, families, or both. In 18th-century England, newspapers frequently featured tales from France of giant wolves killing huge numbers of sheep and shepherds. Occasional stories were also told of captive wolves attacking their keepers. Owning a wolf-dog was like mastering a wilderness that had long since disappeared.

Creatures like Lupa, by virtue of their appearance, behaviour and the fact they were known to be part wolf, were not really dogs. Neither, though, were they really wolves. Dogs had been so long domesticated that their wilder counterpart was fascinating as well as fearsome, imbued with all the anxiety that people had about the wilderness beyond their world. The concept of the wolf in 18th-century England was so strong that a dog need only have an association with the wolf to be considered something to be captured and studied or feared and killed. A product of experimentation, later kept on an estate before being buried and commemorated, Lupa represents an intersection of nature and culture; two things that the new order was so keen to stress were separate. 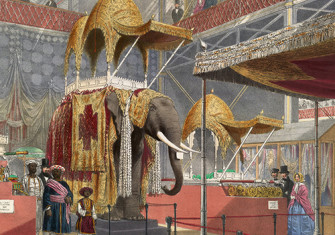 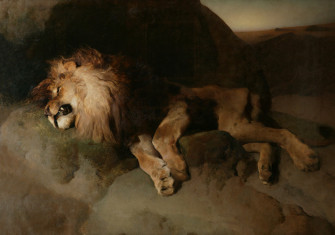