Alexander Lee considers new evidence which suggests that Machiavelli may not have been the archetypal proponent of power politics he is remembered as. 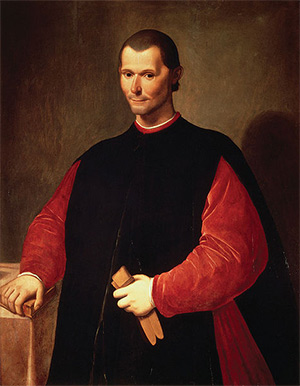 Few figures in the history of political thought evoke such strong reactions as Niccolò Machiavelli (1469-1527). Renowned as the author of The Prince (c.1513), his infamous treatise has become an established milestone in the history of Western thought, and – as the word ‘Machiavellian’ suggests – he himself has come to be regarded as the archetypal proponent of hard-nosed power politics.

Yet The Prince presents something of a puzzle. Although it is often viewed as an uncompromising portrait of monarchical – even tyrannical – government, many of Machiavelli’s other writings are suggestive of a much stronger attachment to republicanism. Indeed, works such as the Discourses on Livy (c.1517) and the Art of War (c.1519-20) seem to run counter to many of pieces of advice given in The Prince. In the Discourses on Livy, for example, Machiavelli not only contends that “governments of the people” are superior to those of princes, but also asserts that “no prince ever benefits from making himself hated”. Such apparent self-contradiction begs some important questions. How does The Prince fit within the context of Machiavelli’s thought? Was he really a monarchist or a republican? Was he just an eclectic and incoherent theorist?

Scholars have struggled valiantly to find an answer to these problems, but without reaching a consensus. Some, following Diderot and Voltaire, have explained The Prince as a satire, intended to ridicule, rather than to praise, princely government. Others, such as Hans Baron, have argued that Machiavelli had a dramatic change of heart, and shifted to republicanism after writing The Prince. Still others, such as Leo Strauss, have argued that Machiavelli – like Thucydides – lacked any clear political ‘agenda’, but who adapted himself to whatever was around. And a final school of thought has searched for ‘universal’ principles derived from Aristotle and Xenophon underlying both The Prince and the Discourses on Livy.

All of these clever interpretations share the same weakness. In seeking to address the problem of The Prince, scholars have all but lost sight of Machiavelli himself, and have overlooked the man behind the books. His motivations, his hopes and dreams, have been all but forgotten. And without understanding what Machiavelli was trying to do with each of his works, it’s all but impossible to establish how they all fit together.

Professor Stephen Milner’s recent rediscovery of the warrant that was issued for Machiavelli’s arrest in 1513 seems to offer some hope of breaking the deadlock. Lost for 500 years, this document focuses attention back on Machiavelli the man, and – since it was issued only months before he penned his most infamous work – it forces us to reconsider why he wrote The Prince in the first place.

Until the issue of the arrest warrant, Machiavelli was unlikely to have considered writing anything like The Prince. Thrust into the heart of Florentine political life at the tender age of 29 in 1498, he built a career as a diplomat and civil servant within a truly republican government. After the expulsion of the Medici in 1494 and the collapse of Savonarola’s short-lived theocratic regime earlier in 1498, the city had reorganised political life along more egalitarian lines than ever before, and under the leadership of Piero Soderini, Florence became a paragon of republicanism. In his role as Second Chancellor, secretary to the Dieci di balìa (Ministry of War), and later, overseer of the militia, Machiavelli became integral to the administration and security of the commune, and remained a committed servant of the Republic.

In 1512, however, everything fell apart. After a series of military defeats, Soderini was forced from office. With the help of Pope Julius II, Giuliano di Lorenzo de’ Medici was installed as the de facto ruler of Florence. The Republic collapsed.

Immediately, Giuliano purged the government and instituted a city-wide witch-hunt. As a prominent republican, Machiavelli was summarily dismissed from his positions in late 1512, and in 1513, a warrant was issued for his arrest. Accused of plotting against the Medici, he was tortured using a cruel technique known as the ‘strappado’ – which left his shoulders dislocated, and his whole body in excruciating pain – before being released and exiled to his country estate.

It was at this point that Machiavelli penned The Prince. Broken, depressed, and penniless, he saw it as his best chance of getting into the Medici’s good books, and of recouping his losses. Dedicating the book first to Giuliano di Lorenzo de’ Medici – the very man who had destroyed his life – and, after Giuliano’s death, to his nephew, Lorenzo, Machiavelli set out to provide not just a guide to princely government, but a positive justification of all of the terrible things to which he had fallen victim. Much like a fallen Politburo members at a Soviet show trial, Machiavelli defended his persecution in the hope of securing favour. Only later did he feel safe enough to express his republican sympathies more openly.

Although we should be wary about dismissing The Prince as entirely insincere, Machiavelli’s arrest warrant helps to explain the work’s apparent incongruity. More a bid to suck up to those who had robbed him of everything than a true divergence from his republican tendencies, The Prince was a cri du coeur born of suffering and despair, but lacking any necessary links with his other works. Seen in this light, Machiavelli himself appears much less the puzzling proponent of cynical monarchism, and more an innocent victim searching for hope. Indeed, in the end, it seems that Machiavelli was far less ‘Machiavellian’ than we might like to think.

Alexander Lee is a research fellow at the University of Warwick. His book The Ugly Renaissance will be published by Hutchinson in September.