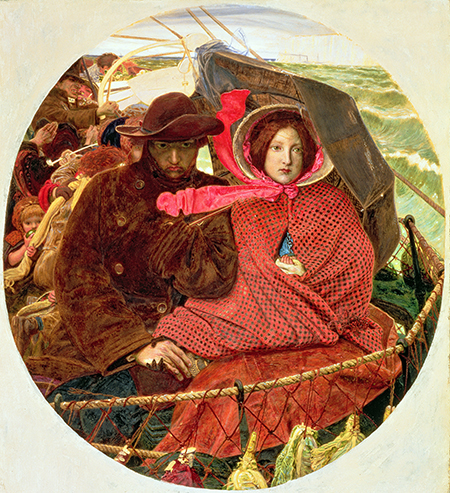 The loss of the emigrant ship William & Mary made news around the world not once but twice in 1853. First, when her captain reported the vessel lost before his eyes in the Bahamas with the death of over 200 passengers left on board; then, again, when the truth emerged – a tale of abandonment, desperation and the help of a salvage schooner and its crew.

The William & Mary left Liverpool for New Orleans on March 24th, 1853 with 208 Scottish, Irish, English and Dutch passengers on board. This was the first time the ship had taken people instead of cargo across the Atlantic and the captain and crew, despite their initial charm towards potential customers, were completely out of their depth. Emigrants were exceptionally vulnerable people, often considered to be worth less than livestock by the people transporting them. The poverty that so often drove them to leave home also rendered them powerless when faced with mistreatment or, in this case, murder.

Upon leaving England, Captain Stinson began the slow process of starving the passengers in his care. Legislation meant to protect emigrants, including strictly specified minimum rations of food and water and the provision of medical care, was easily ignored at sea. The passengers complained of receiving reduced rations and grew ever weaker. Stinson had not bothered to engage a ship surgeon, instead preferring to rely on a pamphlet he kept in his breast pocket. As the men, women and children in his care weakened, some fell ill. Having consulted his pamphlet rather than a doctor who happened to be on board, Captain Stinson decided to prescribe bacon to treat fever. Fourteen died, a high mortality rate for an emigrant ship without an epidemic, and their bodies were immediately disposed of overboard. Several babies were born, too, their mothers glad of the anaesthetic effects of the whisky available to them throughout the birth and in the immediate aftermath.

The passengers pleaded with the cook for more food. When he finally gave in and shared a little of the captain’s dessert with them, this ‘theft’ was discovered and he was beaten to a bloody pulp in front of the horrified emigrants. The captain and crew also demanded a visit from a traditionally dressed Dutch girl as entertainment – the passengers were under no illusions as to the captain’s absolute power over them and were in no position to refuse such a command. Accounts from this girl’s party imply she suffered some kind of mistreatment, but it is unclear what exactly happened to her.

The William & Mary eventually reached the Bahamas, a treacherous area of shallow water and rocky channels, and the passengers grew increasingly concerned. The ship had a near miss and was almost wrecked against an island, but instead of slowing and checking the water depth as they manoeuvred along a channel, Stinson insisted on sailing at full speed. The weather worsened and, as feared, the ship soon hit the rocks.

Ships usually carried insufficient lifeboats and it is unsurprising that this one did not carry anywhere near enough to allow the evacuation of more than a few passengers and crew. The lifeboats they did have were ill-maintained and full of holes, so some of the passengers set to shredding their bedding and stuffing the material between the slats of wood. The captain had other ideas.

Instead of flying a distress flag to signal their plight to passing ships and beaching the vessel on a nearby island to allow repairs and save the passengers and cargo, Stinson and his crew attempted to commit mass murder. Provisions were secretly loaded into one of the boats and kept at a distance from the ship. The captain lied about the depth of water in the hold, doubling it and panicking the passengers. The desperate emigrants, weakened from a lengthy voyage with little food and water, nevertheless pumped throughout the night. They kept the ship afloat until dawn broke and the captain and the majority of the crew could sneak away. When the passengers realised they were being abandoned on a sinking ship, several swam for the departing lifeboats. Some of the crew carried hatchets and hacked at the people they had lived alongside just a few hours before, murdering them.

One young woman from County Durham, in the north of England, went into early labour. Susannah Diamond had already lost her toddler on the voyage. She eventually gave birth to a premature baby while up to her waist in water. It lived for half an hour. The remaining passengers had no choice but to keep on pumping. Someone found the distress flag and raised it, eventually catching the eye of a passing salvage schooner. Two days after the ship was holed, the 175 emigrants left on board were removed in batches from the William & Mary and deposited on a nearby island.

Stinson’s boat was picked up by a passing ship. He claimed his vessel and all on board were lost before his eyes and this was duly reported in the press by suspicious journalists who knew something was amiss. When Stinson and his crew reached the port of New York they scattered. Some time later the surviving passengers were able to tell a very different story, thanks to the generosity of the islanders. Despite all the evidence of Stinson’s attempt to bury his mistake through mass murder – and the actual murder of several emigrants by his crewmen – no charges at all were brought against the captain or crew. The only reason we know of this is because of the kindness and bravery of passing salvagers, who carried on saving cargo and lives while Stinson spent his remaining years working as a house painter as far as possible from the coast. He never went to sea again. If he had attempted to dispose of 200 cows or sheep and lied about it, this would probably be a different story.

Gill Hoffs is the author of The Lost Story of the William & Mary: The Cowardice of Captain Stinson (Pen & Sword, 2016).