While vampires are not real, history shows that the fear of them is. 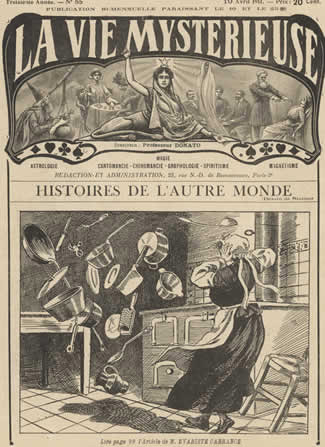 In around 1890, a dead man named Andilaveris was menacing villagers in Messaria, on the Greek island of Kythnos. We are told that ‘sometimes he would even make his way into a house, he would sit down at table, he would eat like a hungry giant and drink like a fish, and then when he had gorged his fill of wine and swallowed all the dainties he pleased, he used to amuse himself by smashing the plates and the glasses, by clattering the pots and the pans, howling horribly all the while like a mad werewolf’.

Andilaveris sounds remarkably like a typical poltergeist: noisy, boisterous, energetic, and destructive. Yet the villagers themselves understood him to be a revenant or vrykolakas: a very close cousin to the vampire. All across vampire territory, from at least 1591 to 1923, people in Greece, Romania, the Ukraine, Bulgaria, Croatia, Poland and Germany were terrorised by vampires which behaved like poltergeists. Outbreaks could last for months, and included violent noises, strange lights, apparitions, untraceable smells, severe and sometimes fatal beatings, along with the familiar smashing and disorder in one or more households. Although British cases are rare, one may well have occurred in Drakelow, Staffordshire, around the twelfth century. Here revenants stalked, 'often in the form of bears or dogs or some other animal, and would batter on the doors and walls of the houses and call out to the occupants to come and join them'.

Just what was happening here? Remarkably, it looks as if many such tales were true. Vampires themselves were not real. But fear of them certainly was – so much so that some people’s terror left them temporarily mute or paralysed, and occasionally even killed them. In these last cases, the cause was what has since been termed 'voodoo death' – a kind of terminal shutdown of the body, catalysed by a mixture of intense fear and magical belief. In vampire country, people's collective terror also did something else. Simply: it caused poltergeist phenomena to occur. It was terror which catalysed these uncanny, seemingly impossible phenomena. The incidents themselves were real, even if the supposed cause was not.

It has long been recognised that in numerous well-documented poltergeist incidents the phenomena centre on one human agent. They are usually young, often pubescent. They have very often suffered nervous or emotional trauma, and phenomena can either follow them from one house to another, or stop when they leave the affected place. There is good reason to think that poltergeist phenomena are a kind of safety valve for dangerous personal energies which release, dramatically, after sufficient internal build-up. This impression of an agent who carries poltergeist activity has been seen in Stockwell, London, in 1772, Amherst, Nova Scotia, in 1877-8, in Illinois in 1957, and in the case of Tina Resch, in Ohio in 1984.

What does this tell us about the vampire poltergeist? First, it suggests that for a long time poltergeist outbreaks were caused by supernatural terror, rather than personal trauma. Second, we find that where many ‘ordinary’ poltergeist cases centre on just one agent, vampire poltergeists fed on the collective terror which so viciously spiralled out of control in a small town or village. Thirdly: if this destructive energy really has a human source, we should expect the violence to stop when appropriate rituals have been performed. And this seems to be what happened: when the vampire was burned, staked or decapitated, people expected the problem to stop. And because these rituals calmed their fears, the problem often did go away.

Abundant evidence shows us that vampire fear was very real, although vampires themselves were not. And much of this evidence also suggests that poltergeists are in fact real, having been the underlying constant in tales of vampires, fairies, ghosts, demons and witches. So – if you want to survive Halloween this year, the simple but ironic advice is: do not be afraid…

Richard Sugg is a Lecturer in Renaissance Literature at Durham University. He is the author of Mummies, Cannibals and Vampires and the forthcoming Faces of the Vampire