The Savagery and Civility of the Thanksgiving Feast

A celebrated image of the first Thanksgiving presents an idealised view of a troubled relationship. 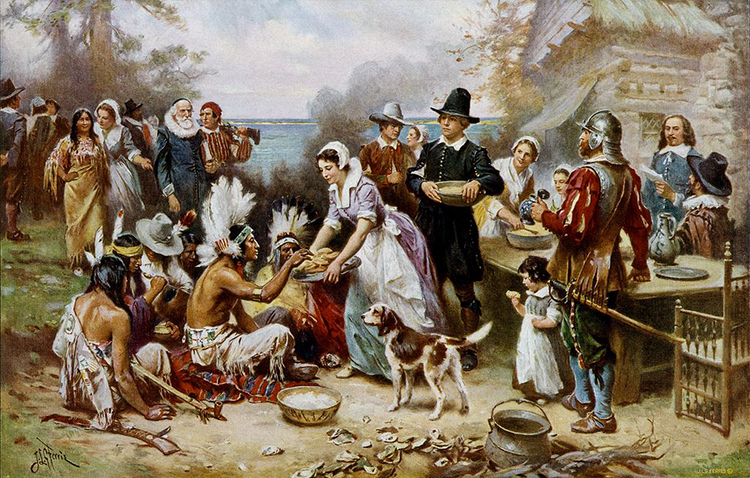 More than any other image of Thanksgiving, Jean Leon Gerome Ferris’s 1912 illustration, The First Thanksgiving, 1621, captures the modern, idealised view of English colonists and Native Americans celebrating a harvest feast in friendship. Completed as part of series, Pageant of a Nation, depicting key moments in US history, few would now be surprised to discover that the work carries an ideological message.

Ferris’ painting shows a female colonist leaning forward to offer a platter of roast turkey to a semi-naked Indian, who sits before her cross-legged as he stretches out his hand to take the food. The celebratory image shows the superiority of the new arrivals over the locals. Behind the composition’s central female figure stands an upright man, presumably her husband, in austere black, carrying a bowl of food. Behind the couple is an English kitchen transported to the American wilderness, with male Pilgrims looking on while their smiling womenfolk work quietly to produce more food for the assembled company. In the background, another female colonist gestures to welcome a native woman. Whether Ferris meant to represent historical figures is unknown, but the man standing at the far right resembles Edward Winslow, subject of the only known portrait of a Pilgrim to survive.

The group of squatting Wampanoag men are compositionally lower than the Pilgrims, who stand or sit on chairs (with one possible exception). An English child, perhaps the offspring of the central couple, and the spaniel (it is known that one arrived on the Mayflower) are both shown at the same level as the native Americans. The picture’s message is clear: New World men are equal in development to Old World children and animals. An ostensibly benign image echoes, therefore, with the Aristotelian concept of the ‘natural slave’, where non-elite men, women, children and animals were deemed to be, by nature, slaves. ‘For that some should rule and others be ruled is a thing not only necessary, but expedient; from the hour of their birth, some are marked out for subjection, others for rule’, wrote Aristotle in Politics.

This concept has taken on a specifically American dimension in 16th-century Spanish arguments about the status of Amerindians. The theologians Juan Ginés de Sepúlveda and Bartolomé de Las Casas had debated the morality of the mistreatment of indigenous peoples by Conquistadors, with Las Casas advocating their conversion to Christianity by non-violent means. In the 1580s, Las Casas’ writings about Spanish violence and inhumanity appeared in English translation and were used as propaganda to justify Protestant colonial ambitions. But Las Casas’s defence of native American peoples as ‘natural children’ rather than ‘natural slaves’ was not translated; only the description of Spanish atrocities merited attention in English.

Almost every aspect of Ferris’ stylised scene is disputed: from the presence of women (they are not mentioned in contemporary accounts), to the dress of the Indians (they are depicted in the clothes of the Plains’ tribes, who wore feather headdresses – eastern woodland Native Americans did not), to whether turkey was eaten. On the latter subject, we know from contemporary accounts that the feast included waterfowl (supplied by the colonists) and venison (the Wampanoag brought five deer) as well as fish, lobster, clams, berries, fruit, pumpkin and squash. Turkey may have been served, since Governor William Bradford, in his Of Plymouth Plantation 1620‒1647, noted that ‘besides waterfowl, there was great store of wild turkeys, of which they took many’. Yet domestic turkeys, common in Europe by the 16th century, were not present in Massachusetts in 1621 (they were first imported in 1629).

English efforts to gain a foothold in the New World had been underway for more than 30 years before Plymouth was established. Walter Ralegh had received a six-year patent from Elizabeth I in 1584 to explore and settle the New World. He founded Roanoke, then in the extensive territory named ‘Virginia’, after the virgin queen, and now in North Carolina. By the 1580s, many Englishmen and women believed that England should make a concerted effort to establish a presence in the New World in order to counter Spanish successes. A fledgling colony was established on Roanoke Island in mid-July 1584 and three years later the first child born to English settlers was delivered. After the outbreak of war with Spain, however, in 1585, it became increasingly difficult to resupply the colony and it had foundered by 1590.

Accounts of interaction with native peoples in Virginia did appear, in Thomas Harriot’s A Briefe and True Report of the New Found Land of Virginia (1588), for example. Designed as a promotional document, Harriot’s account began by describing the ‘marchantable commodities’, then moved on to ways of surviving (noting what the native people lived off ), before turning finally to the native peoples, their ‘nature and manners’. A secret history of survival was being told, in which the colonists relied on their ‘hosts’. This was in stark contrast to Ferris’ depiction of hospitable settlers offering food to eager native recipients. Shakespeare was alert to the paradox even before the Plymouth colony came into being. In The Tempest (1612), his ‘native’ figure, Caliban, complains that he taught Prospero and Miranda how to survive on the is and: ‘I loved thee/ And show’d thee all the qualities o’ the isle,/The fresh springs, brine-pits, barren place and fertile:/Cursed be I that did so!’ His outburst resonates since he has found himself no longer the possessor of the island but enslaved by an arriviste master.

Ferris’ depiction of idealised domesticity also contains a number of discordant elements. Most noticeable are the weapons that litter the landscape, ready, in a trice, to be picked up and fired. One figure, tankard in hand, retains his sword and helmet. Indeed, in Jamestown, less than a year after the first Thanksgiving, such weapons were put to use. Virginia Company instructions of 24 July 1621 had encouraged colonists to cement friendly relations with Native Americans by allowing them into their settlements, but the ever-expanding number of English colonists, their needs for land and food and the murder of an important warrior-priest, Nemettanow, saw relations worsen. The conflict culminated in the massacre of approximately 347 Jamestown colonists by a confederation of tribes on the morning of 22 March 1622. As a result, the policy of cultural interaction ended. In April 1622 the council at Jamestown sent news of the murder of ‘above three hundred men women and Children’. It arrived in London in July.

Responses to the calamity can be found in John Donne’s sermon preached to members and friends of the Virginia Company on 13 November 1622 and Christopher Brooke’s ‘A Poem on the Late Massacre in Virginia’. In response to the Virginia massacre, English colonists, according to Edward Waterhouse’s A Declaration of the State of the Colony in Virginia (1622), were licensed to annihilate Native Americans ‘by pursuing and chasing them with our horses, and blood Hounds to draw after them, and Mastives to teare them’.

The English theatre had engaged in various ways with explorers’ and colonists’ accounts and stories. In the summer of 1622 The Sea Voyage, by John Fletcher and Philip Massinger, was performed in London’s Blackfriars playhouse. It wittily engages with the difficulties of survival for Europeans in colonial locations by focusing on the challenge of maintaining adequate supplies of food and the need to ensure that colonists are able reproduce. Fletcher and Massinger yoke these two issues together. Starvation is an ever-present threat as, for example, hunger forces a group of shipwrecked French men to contemplate eating both the unpleasant detritus of the landscape and, more importantly, the only woman, Aminta, whom they number among their band. In Act III the Frenchmen discuss the attributes of their female quarry before agreeing to ‘divide her, every man his share’. Their plot to eat Aminta is described in explicitly sexual language, as they all wish to consume her ‘hinder parts’. When other characters discover the scheme they initially think that the plan is one of ravishment but when the Frenchmen confess to an ‘appetite’, Aminta’s rescuer, Tibalt, realises that their desires are cannibalistic. With grotesque humour, he shows their folly. It is the stupidity of eating the group’s only woman that is the crux of Tibalt’s sarcasm. In a survival-driven economy, Aminta is important as the mother of future generations; the men are threatening to destroy what they most need: European women.

Tibalt violently chastises the men: ‘Are ye so sharp set that her flesh must serve you?’ and ‘why did you not/ Begin with one another handsomely,/ And spare the woman to beget more food on?’. Tibalt’s apparent suggestion that his compatriots follow the most horrific form of food production possible, the eating of their own babies (with its echoes of Jonathon Swift’s satire ‘A Modest Proposal’ of 1729), takes the cannibalistic metaphor to its most literal extreme.

Such thoughts may be off-putting as Americans gather to enjoy their national feast. It is clear, though, even in Ferris’ idealised depiction of the feast, that the giving and receipt of food are complex cultural markers reflecting both civility and savagery. With resources in short supply, as they were in English colonies throughout the 17th century, feasting was an especially ambiguous and charged activity.

Daniel Carey is Director of the Moore Institute at NUI Galway. Claire Jowitt is Professor of English and History at the University of East Anglia. They are general editors of the forthcoming Oxford University Press critical edition of Richard Hakluyt, The Principal Navigations, Voiages, Traffiques and Discoveries of the English Nation (1598-1600).