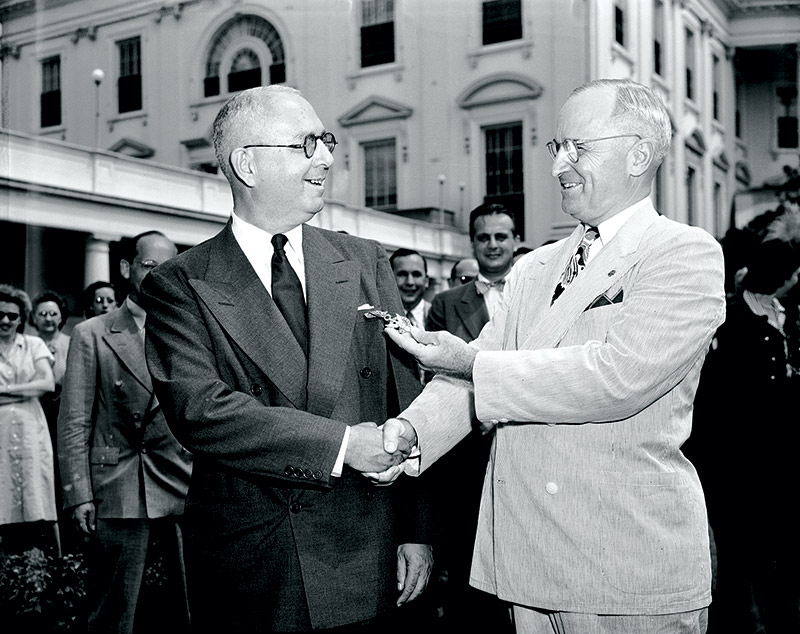 Little public notice was taken when, on 20 August 1947, President Harry Truman’s White House Calendar reported: ‘The President presented the Medal for Merit to Honorable David K. Niles in the Rose Garden. This was a surprise for Mr Niles and was not announced in advance.’ Niles was among the first special assistants to the president named in 1942 and the last remaining from Franklin D. Roosevelt’s administration. He preferred to work in the shadows of the White House, so he was not comfortable being fêted in front of 44 dignitaries, including five cabinet secretaries.

Niles was the son of Polish Jews from a Russian–controlled village, who escaped tsarist pogroms and settled in Boston, where Niles was born David Kohn Neyhus in 1888. Working in the early movie business, he dropped the Neyhus name for the surname of a Boston Latin classmate, Nathaniel Niles, an Olympic figure skater.

He became the unlikely manager of major American governmental and political operations, such as the Federal Emergency Relief Administration (FERA) in Boston and the Works Progress Administration (WPA) in Washington, where he was ultimately responsible for employing 6.5 million people. Niles joined Harry Hopkins, one of FDR’s closest advisers, as assistant secretary of commerce in 1938 and served as special assistant to the president under both Roosevelt and Truman, the longest-serving in American history, from 1942 to 1951. Yet his name is absent from most of the administration histories. That would have pleased him.

When Hopkins left for the UK to coordinate FDR’s Lend-Lease program with the new British prime minister, Winston Churchill, Niles was appointed to the War Production Board before becoming a special assistant in 1942. Niles’ relationship with Hopkins had made him the White House link to the British Security Coordination (BSC). Domestically, he and his friend, the pollster Hadley Cantril, provided strategic data for FDR’s 1944 re-election bid.

Niles’ job as special assistant to the president was to establish and maintain links between the Democratic Party, black and Jewish voters and the Left. Historically, African-Americans had voted Republican, the party of Abraham Lincoln, which saved the Union and emancipated the slaves, while immigrant Jews often voted for Socialist Party candidates. Neither group had been comfortable in the rural white southern-dominated Democratic Party and had overwhelmingly rejected FDR’s first national campaign in 1920, when he ran for vice-president.

The post’s major requirements, in the words of the 1937 Brownlow Commission, were to have a ‘passion for responsibility’ and a ‘passion for anonymity’. Niles was about as anonymous as any Washington insider has ever been. Philleo Nash, his assistant, said: ‘He conducted direct negotiations with old friends and colleagues in all the major departments and agencies. He visited with the president privately and seldom, if ever, attended staff meetings. He put as little as possible in his files and stripped them annually in celebration of the New Year.’ Jonathan Daniels, a fellow FDR administrative assistant, wrote in his diary for 8 October 1942 as he watched: ‘Dave Niles moving about from office to office with hands that taper like those of an Assyrian rug peddler, the same combination of sensitivity and indecency in his fingers.’

Convinced that Niles was a subversive, he was castigated twice on the floor of the House of Representatives by conservative Republican Frederick Bradley of Michigan. Bradley’s second attack in 1943 was based on information from the former ambassador to the UK, Joseph P. Kennedy, of Niles’ birth name and parentage. In spite of Bradley’s hour-long harangue on the House floor, Niles remained in his post, assisting FDR in his 1944 re-election.

It was not Niles’ Democratic activities that were questioned. His alleged links to Communist Party members gained the attention of the FBI’s J. Edgar Hoover, along with hints about Niles’ homosexuality from ex-Communist Whitaker Chambers and former ambassador to France, William Bullitt. Bullitt’s homophobic accusations against Niles and FDR family friend Sumner Welles were rebuffed and, as a consequence, Bullitt was barred from the Oval Office.

That Niles had Russian-born parents, was Jewish and gay, yet became the nation’s longest-serving special assistant to the president, is remarkable. Given the climate of the times, that these facts did not undermine his career indicated how important Niles had become to the political fortunes of both presidents Roosevelt and Truman. Keeping the discordant elements of the Democratic coalition together was a delicate job and Niles’ skill at forging coalitions enabled the party to hold the White House for 20 years.

With FDR’s death in April 1945, Niles was surprised to learn that Truman wanted him to continue as special assistant. He was even more surprised when Truman awarded him the Medal for Merit in 1947. The following year Niles truly delivered for Truman, by urging the White House to integrate the armed forces. As a result, African-Americans, who might have voted for the Republican New York Governor Tom Dewey, remained loyal to the Democratic coalition. Similarly, liberal Jews, who might have voted for Henry Wallace’s Progressive Party, remained connected to the coalition thanks to Niles’ lobbying for the recognition of Israel. In many ways, Niles saved the Truman presidency.

The Berlin blockade in June 1948 escalated Cold War tensions with the Soviet Union that would lead to hot war on the Korean peninsula and, with it, an eruption of anti-Communist accusations directed at Truman administration members. Niles was one of them. In 1951, diagnosed with cancer, he chose to resign. His hopes to visit Israel, the nation he had helped legitimate, were dashed. On 28 September 1952, Niles died. Truman’s statement in response captured both the essence of David Niles and the last indignity that he suffered:

He served two presidents of the United States in positions of the highest trust and confidence. Presidents have been served by many able men, but seldom by one so truly selfless. His passion for anonymity was matched only by his sense of public responsibility. David Niles’ quick mind and warm heart were always in the service of humanity. One of his greatest wishes, unfortunately, was denied him. He had wished to visit Israel, whose birth and future development were close to his heart.