The End of British Communism

It was not the Nazi-Soviet Pact, but the ‘Party line’, which brought an end to the era of ‘fellow travellers’, 80 years ago. 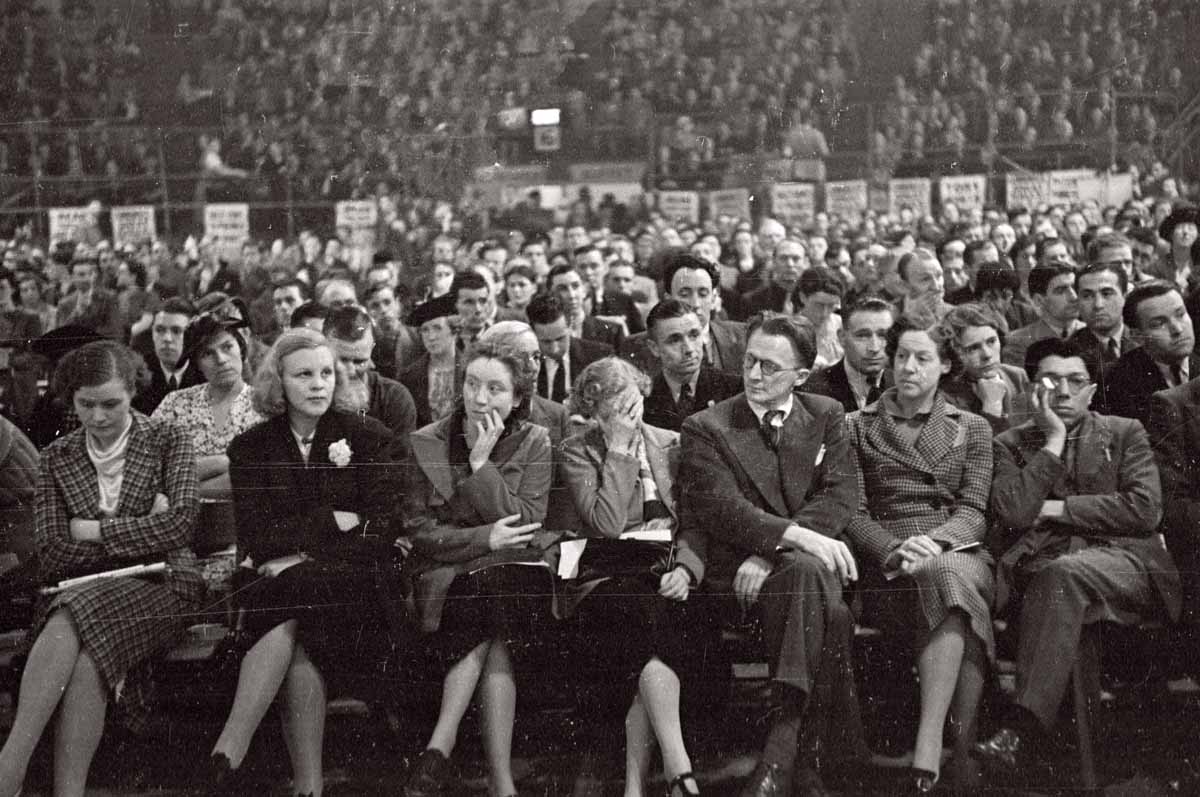 It is ironic that the closest communism came to establishing a mass movement in Britain was between 1935 and 1939, when its adherents abandoned revolutionism and emphasised the defence of bourgeois democracy. The policy attracted not the proletariat, but the left-wing intelligentsia. The principle around which virtually all sections of the left could unite during that period was anti-fascism and the foreign policies of the National Government – appeasement in Abyssinia and Czechoslovakia and non-intervention in Spain – were regularly denounced. It was, in fact, widely feared that Britain was on the cusp of ‘going fascist’ itself.

The Soviet Union joined the League of Nations around the same time Germany left, signed a Treaty of Mutual Assistance with France in 1935 and, unlike Britain, aided the government side in Spain. It was, therefore, widely lauded as the only power willing to defend democracy against fascism. Naturally, these factors convinced many on the left of the superiority of the Russian political system and brought them into closer collaboration with British communists.

The political theorist G.D.H. Cole thought the Soviet Union was establishing a more ‘real’ democracy than could exist under capitalism, where economic exploitation undermined supposed ‘liberties’. The reformers Sidney and Beatrice Webb, meanwhile, penned a panegyric to the ‘new civilisation’ in the east. As left-oriented Christians sought to reconcile their faith with Marx’s doctrines, theologians worked with communists on an essay collection, Christianity and the Social Revolution. Artists and dramatists began to flood the ranks of the Communist Party of Great Britain (CPGB) and the poet Stephen Spender eagerly sought the counsel of its General Secretary, Harry Pollitt, while writing Forward from Liberalism.

All of the above were published by the Left Book Club (LBC), a veritable window into the psychology of the left-wing intelligentsia in the 1930s. The LBC advocated a ‘Popular Front’ government, like those of France and Spain, and a collective security agreement with Russia. Its founder, Victor Gollancz, wanted the Club to be a home for all shades of left-wing opinion – except those which imperiled the Club’s goals. Criticism of the Soviet Union was not, therefore, tolerated. The end, Gollancz believed, justified the means: Stalin was Hitler’s most implacable foe.

There was widespread bewilderment then when, on 23 August 1939, a swastika was hoisted over the Moscow aerodrome as the Nazi foreign minister Ribbentrop arrived to thrash out a Non-Aggression Pact. But Stalin’s reputation had survived forced collectivisation, famine and the Moscow Trials, and most ‘fellow travellers’ were able to swallow even this iniquity. John Strachey, who, with Gollancz and Harold Laski, selected the LBC’s titles, excused the Pact as a defensive measure, which, in part, it was. Kingsley Martin’s editorial in the New Statesman went further. He argued that Neville Chamberlain bore ultimate responsibility: his ideological aversion had prevented an Anglo-French pact with Russia. There was a degree of truth, also, in that accusation. The Tribune, echoing the Communist newspaper the Daily Worker, claimed the Pact as a peace move on Stalin’s part. ‘How deeply’, recalled Michael Foot, years later, ‘the Left craved giving the benefit of the doubt to Moscow. No one who did not live through that period can appreciate how overwhelming that craving was.’

The primary obstacle to British negotiations with the Soviets had, however, been Poland’s reluctance to accept Moscow’s ‘assistance’ in the event of Nazi invasion. And Polish distrust was proved well-founded by the subsequent Soviet expansion into its eastern provinces, which became part of Stalin’s ‘sphere of influence’, delineated in the Secret Protocols appended to the Nazi-Soviet Pact. The Protocols, though, only came to light after the War and pro-Soviet intellectuals justified the partitioning of Poland and the invasion of Finland by the rationale, sardonically summarised by George Orwell, that ‘Stalin had in some mysterious manner stopped Hitler, who would thereafter be unable to perpetrate further conquests’.

Still, August 1939 was the beginning of the end of the intellectuals’ dalliance with communism. Not because they felt betrayed by Stalin, but because they were exposed, for the first time, to the wild oscillations in communist policy. The CPGB, following the line imposed upon it by the Comintern, no longer professed the defence of democracy against fascism, but embraced a tactic of revolutionary defeatism. There was nothing to choose, the Party claimed, between the rival imperialisms – democracy and Nazism – and defeat in war would be the springboard for communist revolution. It was the same belief that had animated the German Communist Party right up until the Gestapo threw its members into concentration camps: ‘After Hitler, us.’

W.H. Auden, a contributor to Christianity and the Social Revolution, branded the 1930s a ‘dishonest decade’. Gollancz shared that feeling. In his pamphlet of May 1940, Where are you Going? An open letter to Communists, he described reading the Daily Worker – which had begun to quote Hitler approvingly and blamed British aggression for the German invasion of Norway – with ‘a sense of almost intolerable shame’. He had ‘realised the danger inherent in even a mild, common-sense, acceptance of the dictum “The end justifies the means”, and to what an abyss, and how quickly, men can descend, if they once begin to depart from the truth.’

In France, Heinrich Mann’s reaction was similar. The German émigré was able to credit Stalin’s ‘wisdom’ in holding aloof from the conflict. But he had, in Lenin’s phrase, voted with his feet by fleeing Germany and developed an affection for the democracy which had sheltered him from Nazism. Stalin could be excused, but the French Communist Party, which distributed defeatist propaganda in the factories, could not.

In early 1941, the CPGB convened a People’s Convention, which made a series of impossible demands and encouraged strikes if they were not acceded to. It was the sordid limit for the LBC selectors, who collaborated with Orwell on The Betrayal of the Left: an examination and refutation of Communist policy. Interestingly, each of them (excluding Orwell) made a point of offering a charitable interpretation of the conduct of Stalin and the Soviet Union. But by returning to the conspiratorial and anti democratic methods of its past – ‘preaching’, as Orwell put it, ‘the doctrines of Machiavelli in the jargon of Lawrence and Wishart’ – British communism had permanently alienated its one-time sympathisers.

Oscar Clarke is a PhD researcher at the University of Bristol.