Canada’s treatment of its indigenous peoples has been described as ‘cultural genocide’. 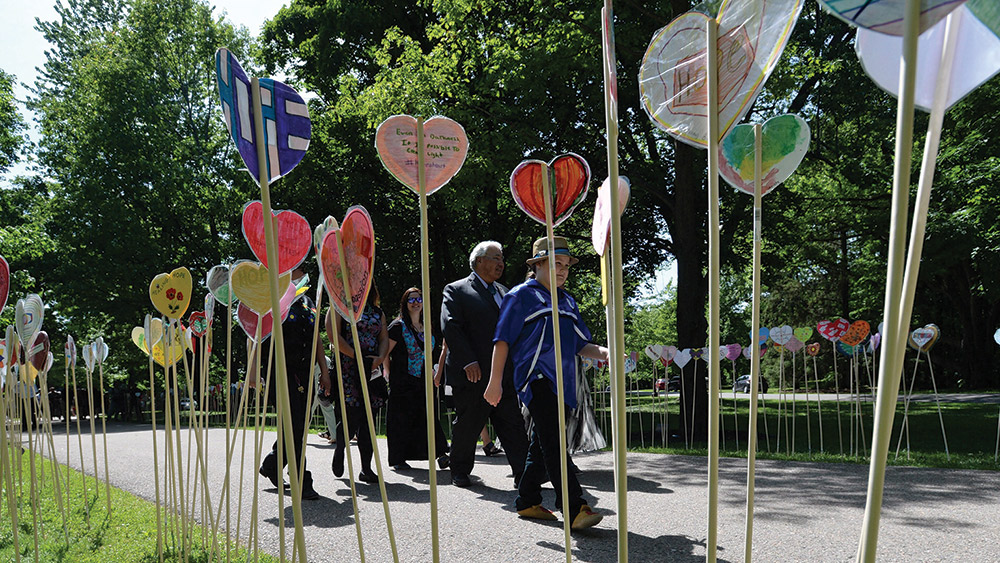 Documenting the effects of the Indian residential school system (governmental boarding schools for indigenous children), the Truth and Reconciliation Commission of Canada (2015) recently defined reconciliation as ‘establishing and maintaining a mutually respectful relationship between Aboriginal and non-Aboriginal peoples’. The Commission determined that this is a relationship that Canada does not presently have. The country is at an important moment in its relationship with First Nations. It is beginning to acknowledge its own colonial history and there is discussion of how reconciliation might be achieved. The context of why reconciliation is needed relates to dark aspects of Canadian history, which linger on today.

First Nations peoples inhabited North America, or Turtle Island, as some cultures call it, for thousands of years before Europeans arrived in the continent. The traditions of many of these cultures tell us that it is their land of origin. Canada, by contrast, is a young nation. Although remaining a British colony for many decades afterwards, it became independent from the UK in 1867. With this, it inherited treaty obligations – agreements that had been signed between First Nations peoples as sovereign nations and the British crown.

Soon after its independence, Canada asserted control over indigenous peoples and lands. The Indian Act (1876), which is still upheld with amendments in Canadian law, was imposed on First Nations peoples without their consultation. It was, and still is, a legal reaction to Canada’s treaty obligations. It limits the self-governance of First Nations peoples, their control over indigenous lands and services they use, such as education and health care.

During this period, First Nations peoples, like Native Americans in the US, were also confined on reservations. Within these spaces, Canadian authorities attempted to suppress indigenous cultural practices. The Potlatch festival for example, a practice which could be used to redistribute wealth or as a rite of passage depending on the culture, was made into a criminal offence in section 3 of An Act Further to Amend the Indian Act (1880). This ban lasted until 1951.

This was all part of a larger process by which Canadian authorities were consciously trying to eliminate indigenous identities and assimilate these peoples into Canadian culture, largely because they wanted them, as an ethnic minority group with unique treaty statuses, to disappear. In 1920, Duncan Campbell Scott, the Canadian Deputy Superintendent General of Indian Affairs said of his government’s policy: ‘Our objective is to continue until there is not an Indian that has not been absorbed into the body politic, and there is no Indian question, and no Indian Department.’

This thinking led to the horrors of the Indian residential school system. These schools were, for much of their existence, run by church denominations and later by the state, from the late 19th to late 20th centuries, the last of the schools closing in 1996. Not all students had negative experiences, but there were many cases at these schools of extreme emotional and physical abuse, including deaths. First Nations children were isolated from their families and forced to give up their own languages and cultures. This had disastrous implications for the self-esteem of many indigenous children. Bud Whiteye, who attended the Mohawk Institute Residential School, recently explained the extensive and oppressive cultural regime within these institutions. ‘You didn’t speak anything but English. You went to the white man’s school. You went to the white man’s church. You wore white men’s clothes. All those were built in. It wasn’t a classroom-type lecture. It was ingrained in the system.’ All this was designed to alienate children from their indigenous identities as they were removed from their families – often forcibly. It was this, specifically, that the Truth and Reconciliation Commission of Canada would go on to describe in 2015 as ‘cultural genocide’, when it determined that the schools deliberately prevented ‘the transmission of cultural values and identity from one generation to the next’.

Canada has much work to do towards reconciliation. First Nations peoples are still enduring the consequences of colonialism. As a demographic group in Canada they are more likely to, among other things, experience overcrowded housing, food insecurity, unemployment, mental health problems in their youth and low levels of confidence in the justice system. In 2015, indigenous peoples (including Métis and Inuit) accounted for 25 per cent of homicide victims, despite only representing an estimated five per cent of the population. Canadian provinces also still allow the exploitation of indigenous lands by businesses and the lucrative extraction of natural resources on these lands, something which many indigenous peoples oppose. The sovereignty of First Nations remains limited. As First Nations activists Arthur Manuel and Grand Chief Ronald Derrickson have pointed out, the Canadian government does not allow indigenous peoples significant power, ‘over any land or resources in … Aboriginal and treaty territory except for the 0.2% that has been designated Indian reserve lands’. Like indigenous peoples who have resisted colonialism in the past, many First Nations peoples are unwilling to accept this situation. For them, Canada needs to make significant concessions so that a better relationship can be developed.

William Rees is an MA student at the University of Exeter, researching indigenous identities in North America.