The Hidden History of Deviant Burials

There is a long and international history of unusual burials. But should they be interpreted as fear of vampires, the supernatural and the living dead? 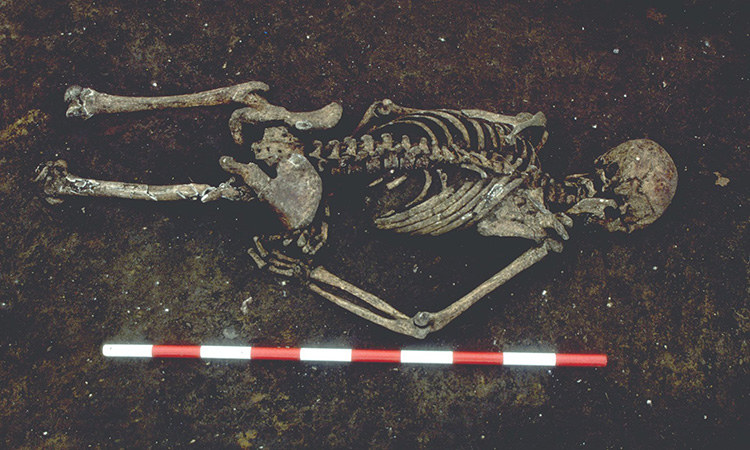 In late January this year news broke of an unusual Roman British skeleton from Stanwick, Northamptonshire. Buried face down, the corpse's tongue had been cut out and replaced with a flat stone. Simon Mays, Historic England’s human skeletal biologist, said in an interview in the Guardian that this mutilation was thought to be unique in Romano-Britain and that ‘The fact that he’s buried face down in the grave is consistent with somebody whose behaviour marked them out as odd or threatening within a community’. Fear of such threats has resulted in many other 'deviant' burials across Europe, in which corpses were effectively scapegoated for a range of problems, from fatal contagion to severe weather. These burials are vital in showing how history and archaeology can mutually inform one another. On the one hand, archaeologists have shown how far back our fear of the living dead goes. On the other, explicit historical records can offer possible explanations for the more baffling types of deviant burial, such as that at Stanwick.

The most well-known type of deviant burial is probably the classic staking of a vampiric corpse, usually associated with continental Europe. In 2012 Bulgarian archaeologists working near Sozopol found several centuries-old skeletons with iron rods through their chests. Meanwhile, Czech skeletons found weighted with rocks on their chests in Mikulovice some years before were thought to be around 5,000 years old. Elsewhere we see decapitation, piercing of the heart and other areas with nails and burial in swamps or bogs. While the vampires of folklore were often disinterred and mutilated after supposed revenant attacks, anyone already considered suspect in life could suffer deviant burial on first interment. And they are not uncommon: the folklorist Paul Barber has described numerous Celtic sites from the Iron Age featuring deviant burials and, more recently, the ‘dangerous dead’ of Britain and Ireland have been discussed by Mays, John Blair and Matthew Beresford.

What motivated these practices? The logic often centred on the idea of the soul, or some similar life-force. The most commonly believed locations of the soul are the heart and the head, hence the tendency for them to be pierced or weighted. Another motivation might just be that the deceased simply had the bad luck to a die sudden, unnatural death, through murder or accident. There was a widespread belief (still current among the educated at the time of Shakespeare) that each individual had an allotted lifespan, meaning victims of sudden death, whose lives were cut short, were more likely to return in some form after burial. Alternatively, prone burial could have been a way of punishing the deceased, by stopping their soul from leaving the mouth and ascending to heaven. Whatever the beliefs involved, these burials remind us of a basic and long-running motivation: be sure to stop the dead from rising again.

Deviant burials have been found in Britain from as late as the 11th century and there are several detailed stories of 12th-century British revenants who were disinterred and mutilated after alleged attacks. But many lesser-known stories suggest that the practice has persisted beyond the Middle Ages into the 20th century. In Scotland, according to the novelist Nan Shepherd, Farquhar Shaw had ‘troubled the neighbourhood so that when he was dead they set five heavy stone kebbucks [cheese-shaped rocks] upon his flat tombstone, to keep him under’. His grave on the Rothiemurchus estate is still enclosed beneath a metal cage, or ‘mortsafe’, to stop anyone removing the stones which were laid in 1405. And at Torryburn in Fife in 1704, the corpse of Lilias Adie was buried in the foreshore between high and low watermark, with a heavy flat stone over it – possibly, argues the historian Louise Yeoman, because of her confession of witchcraft, and perhaps also because she may have committed suicide whilst in prison.

In February 1824, labourers digging a saw-pit near Tintern Abbey found a skeleton buried face down in an orchard. An elderly local woman suspected this to be the remains of a man thought to have been murdered after he mysteriously disappeared from his house about a century ago. If the man’s murderer feared that he would return, then he would have been buried prone so that the corpse dug itself deeper into the ground, rather than out of it. An intriguing twist on that logic occurred in 1889 when, during an Edinburgh murder trial, the clothes of the murdered man were produced in court, but not his boots. It transpired that the local constable had been ordered to bury them on the shore between high and low watermark to prevent the dead man walking – a precaution which shows that murder victims could be feared by others beside their murderer.

No less memorably, in July 1915 an officer saw two British soldiers burying a dead German face down. The officer evidently knew that this was a precaution lest the dead man try to escape and also seemed to consider this a general superstition among ordinary soldiers.

While this tells us more about the persistence of prone burials in British culture, we still have the question of that stone in place of the tongue. Why was this done? Mays speculated that the man’s tongue was cut out as a punishment for spreading malicious accusations. One possibility not yet raised is that the corpse was a scapegoat for severe weather. There are many detailed stories from 19th- and early 20th-century Russia, Austria, Poland, Romania, Hungary and Czechoslovakia, which tell of people disinterring a corpse in order to combat storms, frosts or drought. In cases of drought a corpse could have water poured on it, or be thrown into water, as was the body of a Russian woman who died of intoxication in 1891, linking her death by fluid with the associated drought. Similarly, in Czechoslovakia in 1900, a summer drought was attributed to the fact that the village schoolmaster had been buried with a feather pillow beneath his head. This, the villagers held, needed to be removed to bring rainfall. Although drought is more common in these cases than floods, the folklorist Agnes Murgoci wrote in 1926 of heavy rains in Zarnesti, blamed on the supposedly vampiric corpse of a recently buried girl.

In light of these examples, the mouth of the Stanwick skeleton could imply a desire to stop excessive rainfall by placing something hard, dry and dead where the soft, moist, living tongue had once been. Kindly commenting on this theory, Simon Mays noted that the tongueless corpse was buried in a site which began to be used as a cemetery only when it became too waterlogged for habitation. Alternatively, it is possible that the mutilation may have been a more basic attempt to stop the corpse feeding on the living. Given the bacteria found in the skeleton’s bones, there could also have been a contagious epidemic at work, for which the deceased had been blamed, leading to the stone being placed in its mouth as punishment.

While it is impossible to settle on a definitive explanation so many centuries after the event, the many extant and explicit cases of corpse mutilation and deviant burial found across the world do all tend to show that such treatment was considered to be for the good of the community as a whole. Accordingly, the whole community usually supported it.

One particular case of weather scapegoating from the Crimea reminds us of how general and forceful such beliefs could be in a rural society. When the prolonged drought of summer 1905 was blamed on a supposed wizard, buried that March, the villagers of Svino Krivza led a solemn torchlight procession to his grave one Sunday at midnight. To the dirge-like playing of fiddles and flutes, he was disinterred, so that the village priest could sprinkle him with holy water before reburial. Unfortunately the priest, Father Constantin, objected and rashly upbraided the villagers for their barbarity and superstition. As a result, he was thrown into the grave, with the offending corpse hurled in on top of him. He was hauled out the following day but could not be revived. If not for two especially pious women who had alerted the police, we should perhaps never have known of this case at all. Even tongue-less dead men, however, can still tell tales – although we now have difficulty knowing which one to take as gospel. In such cases, history, folklore and archaeology must speak to each other.

Richard Sugg is the author of The Real Vampires, A Century of Ghost Stories, and A Century of Animal Stories (forthcoming). Fairies: A Dangerous History is due out with Reaktion in spring 2018. He is collecting real life ghost and poltergeist experiences and would welcome any new contributions to richardjsugg@yahoo.co.uk. https://doctorrichardsugg.com/