Stephen Cooper explores the history of firearms law and the key differences between the United States and Britain. 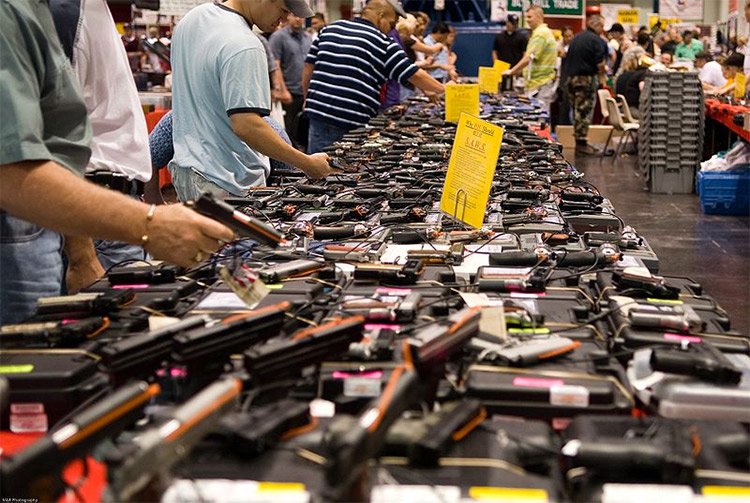 The purchase of firearms is largely unregulated in the US and it is unlikely that Congress will act to change this any time soon. President Obama has tried and failed to introduce stricter gun control before; but the fundamental obstacle remains what it has always been. The right to bear arms is protected by the Constitution, which is very difficult to amend.

The contrast with Britain could not be more marked. Britain has few guns and gun control is strict; yet the legal position was once the same in Britain as it is in the US.

From the ninth century, medieval England was a monarchy and a comparatively centralised state. It was also a society that was organised for war, yet the Crown had no standing army or navy. Defence was largely a matter for local militias, but the Crown had various powers to summon men to assist in defence and, from Norman times, to assist in the invasion of France. Sometimes, the king tried to insist that all able-bodied men had the duty to serve, at other times he called on the landowners to assist him. At all times, it is clear that the men who were summoned to fight were expected to provide and bring suitable weapons with them, according to their ‘station’ in life. In other words, there was an obligation to bear arms, rather than a right.

In course of time, the weapons changed: firearms and handguns became common in the 16th century and, as the costs of war escalated, so the Crown was obliged to rely more and more on standing forces, though the English were always reluctant to accept the need for these, or pay for them. On the other hand, the common obligation to bear arms was transformed, as a result of the Civil Wars of the 17th century, into an individual right. The key event appears to be the ‘Glorious Revolution’ of 1688, when it was believed, at least by influential Protestants in Britain and Ireland that James II had tried to extirpate the Protestant Religion … by causing several good Subjects, being Protestants, to be disarmed. The response was an article in the Bill of Rights of 1689, which provided that Protestants could have Arms for their Defence suitable to their Conditions and as allowed by law. This became part of the Revolution settlement, which held good throughout the ‘long’ 18th century in the British Isles and in the expanding British Empire, which came to embrace almost the entire eastern seaboard of North America.

The classic statement of the position in English common law is contained in Blackstone’s Commentaries on the Laws of England, in particular Volume One, On the Rights of Persons, published in 1765. There Blackstone states that the subject has three principal and absolute rights – to enjoyment of life and limb, health and reputation; liberty; and property – and five auxiliary or subordinate rights. These are (1) the powers and privileges of Parliament; (2) the limitation of the king’s prerogative; (3) the right to apply to the courts for redress of injuries; (4) the right to petition the king, or either House of Parliament, for the redress of grievances; and last but by no means least (5) that of having arms for their defence, suitable to their condition or degree, and such as are allowed law.

There are various features of this right which are remarkable. First, Blackstone did not say anything about the right to bear arms being restricted to Protestants, but the authority for his proposition is the Bill of Rights, which did. Second his statement of the rights of the subject is a statement of the rights enjoyed by Englishmen, not English women. Lastly, the origin of the right is said to be a natural right of resistance and self-preservation, when the sanctions of society and laws are found to be insufficient to restrain the violence of oppression. This is surely a recognition by Blackstone at least that, in 1640 and in 1688, (Protestant) Englishmen had found it necessary to resort to revolution to prevent the Stuart monarchy from going down the road of absolutism (and Roman Catholicism); but it should not be thought that this was only one point of view. There was no shortage of conservative Englishmen, for example Sir Robert Filmer (1588-1653) and Thomas Hobbes (1588-1679), who denied vehemently that the subject had any right at all to resist his Sovereign.

It is a truism that the United Kingdom does not have a written constitution; but it may be thought that here, in his Commentaries, Blackstone was providing the basis for such a document; and the Second Amendment to the Constitution of the United States, which was adopted in 1791, is thought to have been based on his work. This provided that a well-regulated militia being necessary to the security of a free state, the right of the people to keep and bear arms shall not be infringed. Again we must look to what it is implied here. There is nothing about the right being restricted to the members of any particular religious denomination; but the right was certainly restricted to white men, or at least to men who were free rather than slaves; and again, women were excluded.

The historical background is clearly important, both in Britain and the USA. In America a confederation of the thirteen British colonies had won independence from Britain between 1776 and 1783, and the erstwhile colonists had then proceeded to establish a ‘more perfect Union’ by means of the Constitution of 1787, to which an important Bill of Rights was attached four years later. The second amendment, dealing with the right to bear arms, was part of that Bill of Rights. It clearly owed much to the revolutionary experience, as well as to English common law and political theory. It had been necessary for the colonists to fight for their liberty, and the fighting had largely been done by local militias, grouped together in a Continental Army led by George Washington, which had defeated a standing (if expeditionary) army of mercenary royal troops.

If Britain and America started off in much the same place in 1791 with regard to the right to bear arms, they have certainly ended up in very different situations. Is the reason for this a matter of culture, politics or law? Perhaps it was all three but the legal context is certainly important.

The US is a federal state, with a written constitution. The federal government and each of the constituent states has an executive, legislature and judiciary and the powers of each are set out in the Constitution, the interpreter of which is ultimately the federal Supreme Court. In 1787 Americans thought that, by and large, they were framing their new institutions along British lines; but in fact they adopted a model which was different in a number of ways. Both countries believed in the rule of law and the independence of the judiciary; but in the US the Constitution provided for a strict separation of the three powers. Moreover, they developed the idea that the Supreme Court could strike down primary legislation, whether at the state or federal level, if it was held to be unconstitutional. Crucially, the Constitution is notoriously difficult to amend: an amendment must be passed by a two thirds majority of the House of Representatives and the Senate and ratified by legislatures in three quarters of the states.

In contrast, Britain has always been a unitary state and this remains true even after the secession of the South of Ireland in 1920 and the devolution settlements of the 1990s. Parliament is sovereign. There is no law higher than an Act of Parliament and one Parliament cannot bind its successors. There is no strict separation of the powers: it is the executive which controls the legislature, in normal times; and the courts have no power to strike down legislation. The last proposition remains true, despite the profound legal consequences of Britain’s membership of the European Union and the European Convention on Human Rights. In any case, neither European Union law, nor Convention law contains any provision equivalent to the US Second Amendment.

What is the consequence? In America, the right to bear arms is a constitutional right. There has never been a successful attempt to amend the Constitution in this respect and it is difficult to see that there will be in the foreseeable future. All the Supreme Court can do is to interpret the right, so as to say whether various attempts to limit or control it, at state or federal level are lawful.

In the UK, the position is quite different. As Blackstone made clear, the origin of the right to bear arms was in a statute. If a right is statutory, it can be amended by another statute; and this is in fact what has happened. By the time Blackstone wrote his Commentaries, the right provided for in the Bill of Rights had already been modified by the Disarming Acts of 1716 and 1725 and by the Act of Proscription of 1746, which served to suppress the Jacobite Rebellions and demilitarise the Highlands and Islands of Scotland. In the early 19th century, when it was widely feared that a ‘crime wave’ was sweeping across the country, fuelled by soldiers and sailors returning from the Napoleonic Wars, Parliament enacted the Vagrancy Act of 1824, the Night Poaching Acts of 1828 and 1844 and various Game Acts, starting in 1831. These all had the effect of controlling the possession of firearms, at least by the ‘lower orders’. Likewise, in the early 20th century, when another crime wave was feared following the demobilisation of millions of men after the First World War, Parliament enacted the Firearms Act of 1920 and this has been re-enacted and strengthened many times since.

The result is that in Britain there is no longer a right to bear arms. The policy of the law is that it is illegal to possess firearms unless one has a permit.

Stephen Cooper was a government lawyer and is the author of Agincourt, Myth & Reality, 1415-2015.