The presence of Yersinia pestis bacterium in skeletons found in a recently discovered plague pit proves that the Great Plague of 1665 was bubonic. Or does it? 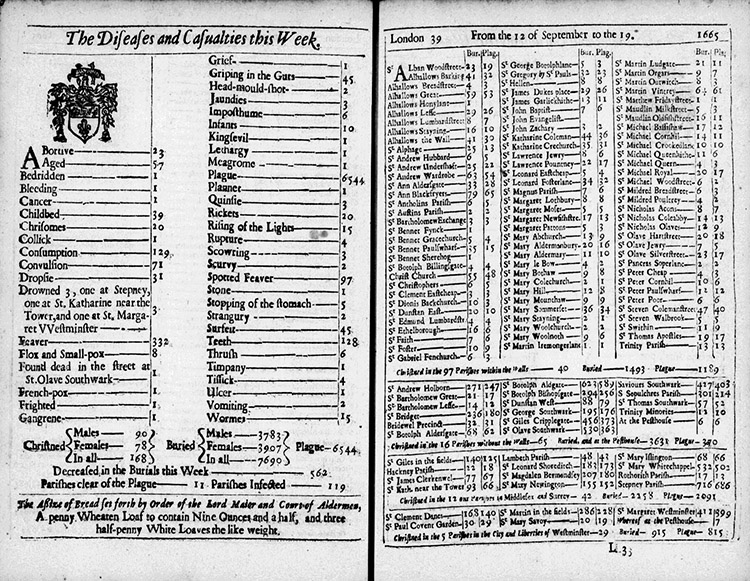 In August 1665, from his two-room lodgings in Southwark, the chemist John Allin wrote to a friend in Rye, Sussex that:

I am through mercy yet well, in middest of death & that too approaching neerer & neerer: not many doores off, & the pitt open dayly within veiw (sic) of my chamber window, the Lord fitt mee & all of us for our last end.

A pit similar to that visible outside John Allin’s window was dug and filled with plague dead in the New Churchyard Cemetery in east London. This pit was uncovered during recent work at Crossrail’s Liverpool Street Station. Earlier this week, BBC news splashed a bold headline across computer screens and social media platforms: using DNA analysis, the Yersinia pestis bacterium, which causes bubonic plague, has been confirmed to be the cause of London’s Great Plague of 1665. Finally (it seemed) a long-held debate among historians as to the biomedical cause of London’s early modern plague epidemics was brought to an end.

In fact, the information shared in the article instantly lessens the impact of the claim, clearly written for its shock value. Of 42 skeletons found in the plague pit, which was dated to 1665 based on pottery found among the burials, the teeth of 20 skeletons were subjected to a number of tests, including one to distinguish the presence of Yersinia pestis. The test returned positive results for five of the skeletons, meaning that these individuals were exposed to bubonic plague shortly before their deaths. It is a significant find and is the first time that DNA evidence has supported the identification of Yersinia pestis as an agent in the Great Plague of 1665.

The fact that the disease early modern Londoners called ‘plague’ was, in fact, what we know now as ‘bubonic plague’ is taken for granted. The issue has been debated for over 30 years since Graham Twigg published The Black Death: A Biological Reappraisal, which argues that the climate and conditions of Europe – and the British Isles in particular – were not conducive, to the point of impossibility, of sustaining the rat and rat flea population necessary to establish epidemics on the scale seen in the medieval and early modern periods. Since then, Twigg has been echoed by scholars like Samuel Cohn, who contended that the agent responsible for early modern plague is one entirely different than Yersinia pestis which we know to be responsible for modern plagues in China and India, including contradictory epidemioligies.

The writers of the medical pamphlet literature devoted to disseminating information on the perceived nature, causes, prophylactics and cure of the plague described the symptoms of the disease in lurid detail. In the early stages of illness, these symptoms included thirst, chills, shaking, headaches, nausea, loss of appetite and drowsiness, escalating in later stages of the disease to cold sweats, coughing up blood phlegm, vomiting, diarrhoea and convulsions. The most telling symptoms were those which affected the victims’ skin: blains, carbuncles, blisters and those swellings that were described by Nicholas Culpepper as ‘risings behind the eares, under the Arme-holes, or in the groyne, without any manifest cause knowne’. In another word, buboes.

These swellings are the main reason 16th- and 17th-century plagues are so closely associated with modern bubonic plague, which attacks the lymphatic system, causing inflammation, which results in the eponymous buboes. However, if we were to go by the symptoms described by practitioners such as plague doctor Nathaniel Hodges (1629–1688) or apothecary William Boghurst (1630/31–1685), we would find that there are a number of other diseases with similar symptoms, including anthrax, typhoid, diphtheria, typhus, even measles.

The problem of diagnosing or identifying the disease was not one lost on 17th-century Londoners. The city’s famed Bills of Mortality make clear that one could fall prey to any number of unfortunate accidents and fatal illnesses, which ranged from ‘French-pox’ to ‘Grief’ to ‘Teeth’ to ‘Griping in the Guts’. In fact, the 1665 Bills, besides the obvious exponential increase in plague deaths, show large numbers of deaths attributed to ‘Feaver’ and ‘Spotted Feaver’. What this tells historians is that either the Searchers – the elderly pensioners paid by the parish to identify cause of death – had little medical knowledge with which to diagnose disease, were being bribed to return a cause of death other than plague or that the mortality crisis of 1665 was in fact caused by more than one disease.

Graham Twigg’s further work in spatially and temporally mapping the burials of Londoners between 1540 and 1720 lends credence to the idea that multiple factors may have been at play during plague epidemics such as that of 1665. Three different mortality patterns are evident during these outbreaks of plague: the first exhibited the steady, incremental build up characteristic of modern bubonic plague; the second showed an extended epidemic with irregular peaks and troughs in the numbers of burials; and the third, typical of diseases like cholera or typhoid, presented with a sharp, sudden peak in deaths followed by a steady, gradual decrease. Throughout the plague epidemics of the early modern period, different parishes are seen to manifest one or a combination of each of these epidemiological patterns, which would strongly suggest that each epidemic was caused by multiple factors.

So does the Crossrail find prove once and for all that the Plague of 1665 was caused by bubonic plague? No, and by and large it doesn’t really claim to. The discovery of Yersinia pestis deaths in the 17th century is progressive: the first biomedical evidence that confirms that Yersinia pestis played a role in London’s early modern epidemics. We cannot, however, dismiss the historical evidence which makes it clear that the bacterium could not have been the only agent.

Lara Thorpe is a third year PhD student researching medical intervention during the Plague of 1665 at Royal Holloway, University of London.