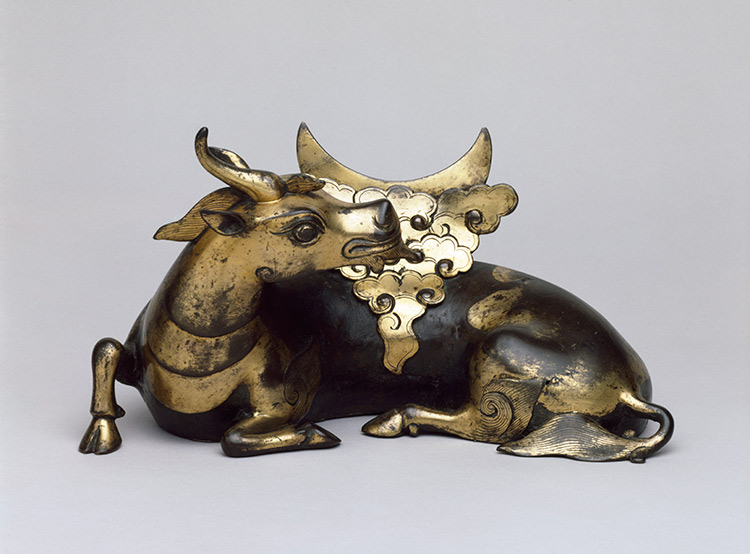 Mongol forces were poised to enter the territory of the Delhi Sultanate in northern India in 1224, after a long campaign against the forces of the Shah of Khwarazmshah in Transoxania and eastern Iran. After destroying the shah’s forces in the Punjab, however, Chinggis Khan returned north, leaving the sultanate intact. The Persian historian Juzjani, writing from exile in Delhi, reported that a combination of climate, terrain and divination caused Chinggis’ return. The latter may relate to an encounter, described in Chinese histories, between Chinggis and a single-horned animal and its interpretation by the Khan’s adviser Yelü Chucai (1189-1243).

The encounter is recorded in two medieval biographies of Chucai, a scholar and official in Mongol service, which locate it near the Iron Gate Pass in ‘East India’ (the Buzgala Pass, in modern Uzbekistan). ‘Shaped like a deer [with] the tail of a horse, green in colour and with a single horn’, the animal could ‘speak like a human’ and addressed the imperial bodyguard, recommending: ‘Your lord should return early.’ Chinggis turned to Chucai for an explanation and, on receiving it, followed the creature’s advice by withdrawing immediately.

Chinggis had given Chucai the nickname Urtu Saqal (‘Longbeard’) at their first meeting. He had already spent six years in the Khan’s retinue, interpreting various portents – deep summer snow, a winter thunderstorm, a meteor – as omens of victory. Ordered to perform divination before every campaign, Chucai conducted scrying sessions at which his calculations were compared to Chinggis’ own from scapulimancy (charring sheep’s shoulder blades and reading the cracks).

Chucai was descended from the Kitan Yelü family, which had ruled northern China and Inner Asia from 907 to 1125 as the Liao Dynasty. After its fall, his father and grandfather served the Jin Dynasty (1125-1234). Chucai received an education based on the Confucian canon, covering medicine, mathematics, astrology and music and got top marks in the civil service examination set by Jin emperor Zhangzong. After surviving the Mongol siege of Zhongdu (now Beijing) in 1214-15, he spent several years at a Buddhist retreat. He was among many Kitan aristocrats recruited by Chinggis in the vital and fluid frontier between the plains of China and the Inner Asian steppe. Besides divination, Chucai governed former Jin territories conquered under Chinggis, the second Great Khan Ögödei and Ögödei’s widow, Töregene, until his death in 1243.

Chucai drew on his education to identify the single-horned animal as a jueduan, a loan word related to Sanskrit khadga and Persian kargadān, ‘rhinoceros’. This fits modern scholars’ conclusions that this is an embroidered encounter with the Indian rhinoceros. Chucai’s explanation is less mundane; paraphrasing the Songshu, the history of the southern Chinese Liu Song Dynasty (420-79), he reported to Chinggis:

Able to travel 18,000 li [6,000 miles] in a day, it understands the languages of the four yi [i.e., foreigners]; symbolizing the abhorrence of taking life, it must have been sent from Heaven Above to warn Your Majesty.

Chucai’s identification is selective. Chinese readers might know that the Songshu goes on to state that the jueduan appears at times of enlightened rule and would be expected to present the monarch with a message.

Chucai interpreted the jueduan and its message as meaning ‘return early’. Both biographies quote him telling Chinggis that the animal brings him a message expressing divine will. Choosing to accept this confirms Chinggis as a monarch worthy of receiving such a message and links heaven’s will to the protection of human life. Sitting uneasily alongside what we know of the Mongol conquest after 1224, Chinggis' obedient withdrawal seems an insufficient reaction to such a message. For readers of the encounter in the Yuanshi, the most important source on Mongol rule in China, the episode both confirms and questions the divine basis of Chinggis’ authority.

As importantly, however, Chucai’s identification of the jueduan makes him a sage in a long Chinese intellectual tradition.

Beside the animals’ nature as messengers to rulers, accounts of such encounters, prominently with the ‘Chinese unicorn’ qilin (Japanese kirin, hence the beer), similarly associated with royal status, emphasise those who recognise and name them. Chucai is thus linked to Confucius himself, who reportedly identified a qilin from eyewitness descriptions in 481 bc. It is also significant that, whether or not Chinggis is a monarch worthy of messages from heaven, Chucai is clearly essential to his understanding of those messages. Chucai’s sagehood is, it seems, far more secure than Chinggis’ empire, and the appearance of the jueduan – rhino or unicorn – is no simple event, but a tale making Yelü Chucai more than equal to his warlike rulers.

Geoffrey Humble is a PhD student at the University of Birmingham, researching imperial Mongol historiography.