How one man did battle with fake news in the 17th century. 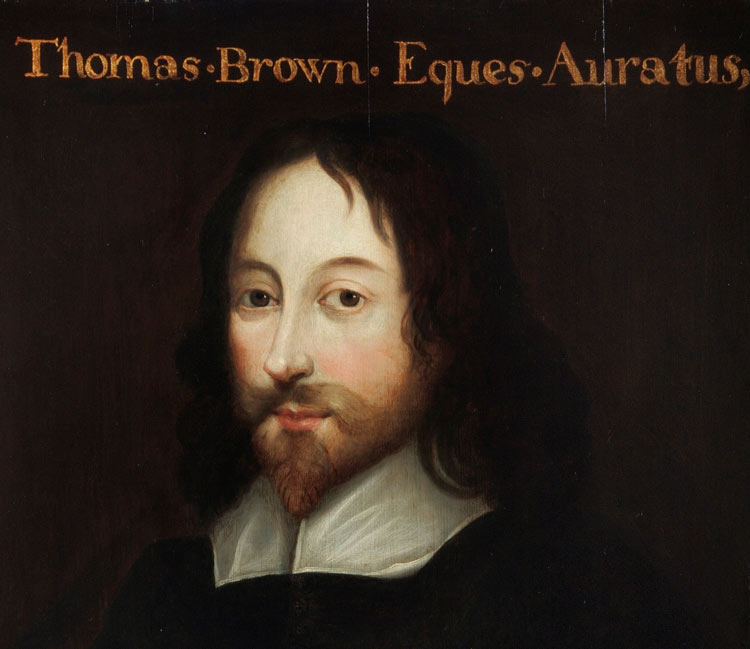 After Lear has announced the division of his kingdom between his daughters, there is much jockeying for position by their respective retainers in Shakespeare’s play. The Earl of Kent, the king’s most loyal adviser and Cordelia’s defender, squabbles with Oswald, steward to the treacherous Goneril, as they both seek to deliver letters to Regan. He launches a string of brilliant invective at Oswald, calling him varlet, knave, whoreson and much else besides: ‘smiling rogues’ such as he are not to be trusted, he snaps; they ‘turn their halcyon beaks / With every gale and vary of their masters’.

Halcyon was the name for the kingfisher, and in early modern England it was believed that the body of a kingfisher suspended on a thread could be used to tell the direction of the wind. The belief seems to have been widespread. ‘How stands the wind? Into what corner peers the halcyon’s bill?’ asks a character in Marlowe’s The Jew of Malta, written a few years before Shakespeare’s tragedy. (Halcyon days, incidentally, got their start in Pliny the Elder’s Natural History. They are the days around the winter solstice when the weather is supposed to be exceptionally calm and when kingfishers were thought – wrongly – to lay their eggs.)

It seems silly enough to us now, but how were such beliefs actually to be refuted? Step forward, Sir Thomas Browne. Browne (1605–82) was a physician, antiquary and writer who lived in Norwich, then England’s second city. He is best known now for two literary works, the youthful Religio Medici, a confession of his Anglican Christian faith made to mollify those who feared that as a modern doctor he might be an atheist, and the mature masterpiece Urn Burial, a gorgeously ornate disquisition on customs of death and burial.

But during his lifetime, it was another book that earned him fame, running into six editions during the years of the Commonwealth and the Restoration. His grandly if obscurely titled Pseudodoxia Epidemica, first published in 1646, was a compendium of urban (and rural) myths of the 17th century. Fortunately, it came with a more user-friendly alternative title, Vulgar Errors, and a subtitle: Enquiries into Very Many Received Tene[n]ts and Commonly Presumed Truths.

In this popular work, Browne groups popular errors by type – those to do with animals, minerals and plants; those to do with humankind, where he dispels prejudices about other races and religions; and those to do with events described in the bible and to do with things seen in pictures. Browne uses a number of weapons to demolish each ‘vulgar error’. He refers to authority, often the ancients such as Aristotle, Pliny and the Roman physician Galen, but also Renaissance scholars whose work he has read during his years of medical training in France, Italy and the Dutch Republic. On other occasions, he seeks to persuade his reader using pure reason. And just occasionally, he takes a more empirical approach, giving a lucid account of an experiment he himself has performed in order to establish the truth.

This is how he treats the idea that a dead kingfisher makes a good weathervane. He begins in his typical fashion with a clear statement of the ‘error’, conveying just a hint of his own rational scepticism, and then advertising how he will address the matter:

That a king-fisher hanged by the bill, sheweth in what quarter the wind is by an occult and secret propriety, converting the breast to that point of the Horizon from whence the wind doth blow, is a received opinion, and very strange; introducing natural Weather-cocks, and extending Magnetical positions as far as Animal Natures. A conceit supported chiefly by present practice, yet not made out by Reason or Experience.

He describes his experiment with exemplary clarity. He hangs a kingfisher up ‘with untwisted silk in an open room, where the air is free’ – the silk being untwisted so as not to distort the result. He finds that the bird turns in no particular direction. So far, so good. But the result is not as conclusive as it might be. To be absolutely sure that there is no correlation between the wind direction and the bird’s orientation, he suspends a second bird, and finds that the two ‘will not regularly conform their breasts, but oft-times respect the opposite points of Heaven’. 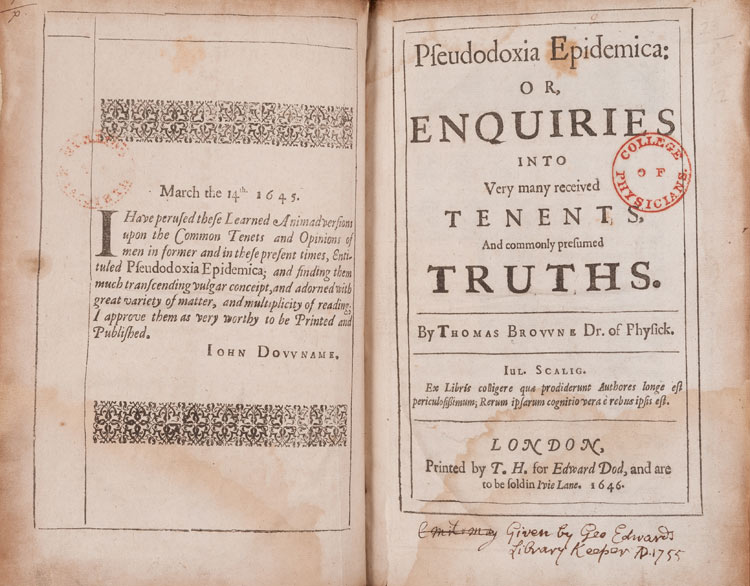 And so it goes, throughout the Pseudodoxia, as Browne tackles the belief that badgers’ legs are longer on one side than the other (believed because they run easily along ploughed furrows), that human-shaped mandrake roots shriek with pain when pulled form the ground, that ostriches eat iron, that unicorns and gryphons exist, that there is anything special about the ring finger, that people die in exceptionally large numbers in their 63rd year, that Jews stink ...

Browne performs his task as an evangelical rationalist employing supremely erudite prose full of wit and tolerance. Occasionally, he cannot decide the truth of the matter, or surprises himself by yielding to a conclusion that he at first thought ridiculous. Watching him as he juggles the various opposing views is part of the pleasure of reading him. A project that might have been earnest, worthy and dull becomes a sheer delight.

The Pseudodoxia may be read as a work of literature, although it is less self-consciously polished than either Religio Medici or Urn Burial. But it had an urgent practical purpose, too. Clarifying the truth or otherwise of claims made for the properties of plants and minerals was especially important for Browne, who as a physician would have prescribed his own herbal preparations and would have been all too well aware that there was a thriving unregulated market for all such forms of ‘remedy’.

He was also writing at an exciting time for science. Had he been in London rather than provincial Norwich, he doubtless would have found himself drawn into closer colloquy with the men who founded the Royal Society in 1660. (He corresponded with some of them, but was never a fellow.) Although his focus was on natural history and medical matters, he could not resist speculating about exciting new topics, such as magnetism and electricity – puzzling and invisible phenomena that were at the forefront of natural philosophical enquiry in the 17th century. But his interests always ran wider than just science, and his unique literary voice in the end ensured that he stood apart. Put simply, he did not write sufficiently scientifically, even when his subject was science itself. He understood that the world and the words with which we are constrained to describe it are richer and more ambiguous than science alone can grasp.

In our ‘post-truth’ age of fake news, Browne reminds us that there was also a ‘pre-truth’ era, when modern science was just beginning and the facticity of many reported things remained to be established. Aside from his literary legacy, Browne was one of the most prolific coiners of new words in English. Among his lasting inventions are anomalous, fallaciously, hallucination, incontrovertible, insecurity and precarious – words that speak of the urgency of distinguishing the real from the imagined and true from false.

Hugh Aldersey-Williams’ The Adventures of Sir Thomas Browne in the 21st Century is published by Granta.