The Battle of Rorke’s Drift

Why is the siege such a popular and controversial imperial episode? 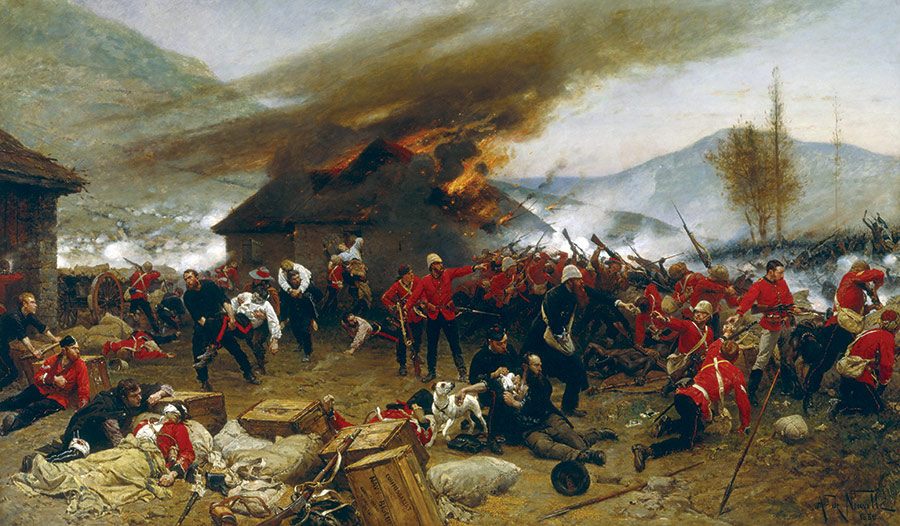 The battle of Rorke’s Drift of 22-23 January 1879 was refought in 2018 when a London Underground employee wrote an account of the siege on Dollis Hill Tube station’s notice board to mark its 139th anniversary. Within hours, however, the message had been erased with apologies following complaints that it was celebrating colonialism – a decision which was itself condemned in some media outlets as ‘rewriting history’. It was a brief controversy, but a resonant one for considering how Britain remembers and forgets its Empire and how these memories are shaped by an inheritance of imperial narratives and images. Thanks to the 1964 film Zulu, Rorke’s Drift has become in the modern imagination the prototypical Victorian colonial battle. Brief, heroic and apparently uncomplicated, it stands as a memorial proxy for a wider, more complex and troubling imperial history – and this has a longer tradition than we might think.

Since the Indian Rebellion of 1857, the Victorian public had enjoyed accounts of colonial sieges for their drama and heroism, for their moral dimension as a supposed test of personal and national character and for their guilt-free vision of a defensive rather than aggressive empire. Drawing on traditional ideas of Britain as an embattled ‘island fortress’, the spectacle of an outnumbered, surrounded, garrison in peril forestalled any debate about imperial policies, commanding unquestioning sympathy and support. These myths re-emerged in the tumultuous political scene of the 1870s. The expansive imperialism of Disraeli’s Conservative government was viewed by many as something un-British and potentially despotic. As such, the 1879 invasion of Zululand was controversial; at one public meeting, a garment-maker named Miss Brown was cheered when she demanded to know why Britain was shooting at Zulus rather than trying to sell shirts to them. Answering such questions became more urgent after the encampment at Isandlwana was overrun with a loss of 1,300 men. Happily for Disraeli, this disaster was followed later the same day by the successful defence of the Rorke’s Drift mission station, where just over 150 British and colonial troops repulsed a Zulu force estimated at over 4,000 in a desperate 12-hour battle. Here was proof, the prime minister declared, ‘that the stamina and valour of the English soldiery have not diminished’.

In need of good news, the army and government seized upon the victory. An unprecedented 11 Victoria Crosses were awarded in widely reported ceremonies, while the senior lieutenants, John Chard and Gonville Bromhead, were swiftly promoted. Beyond such efforts, however, Rorke’s Drift evidently struck a genuine chord with the public. Plays like The Kaffir War and The War in Zululand included characters who voiced doubts about the war, only to have them banished by the irresistible patriotic drama of the siege finale, with its volley fire of blank cartridges and choruses of ‘God Save the Queen’. Even Gladstone, amid his fiery condemnations of Disraeli and defences of ‘the rights of the savage’, was careful to acknowledge the ‘gallantry’ of the garrison.

Ideas of racial difference and national defence were intermingled from the beginning in this popular image. The defence was conflated with the defence of the nation itself by the poet Emily Pfeiffer, who described the besieged garrison as a fortified ‘island … upon a black and howling sea’. This faceless, dehumanised Zulu enemy was echoed in the battle painting by Alphonse de Neuville in 1880, in which they were relegated to the edge of the canvas as what one critic described as a ‘sable sea’. This racialised island story was an enduring narrative, repeated with different casts across the warzones of Egypt, Burma, Afghanistan, China and the Sudan in the following decades. As late as 1940, George Orwell could declare that the stereotypical vision of empire held by many was one of perpetual siege, in which ‘at the outposts of Empire the monocled Englishmen are holding the niggers at bay’.

Whatever the intent of its producers, then, when Zulu arrived in British cinemas it formed part of a tradition which coloured its reception. Colonial siege films were in vogue, from contemporary decolonisation narratives of Kenya and Malaya to 19th-century epics like 55 Days at Peking (1963) and Khartoum (1966). Zulu was certainly among the more progressive of these, offering a sceptical perspective on class and imperial hierarchies, coupled with admiration for the courageous Zulus, played by their modern descendants. Film historians have tended to emphasise this liberal intent – ignoring, however, the popular alternative readings of Zulu as a nostalgic paean to the lost Empire. The war’s wider context was hastily passed over, the divided garrison overcame personal differences in the common cause and their patriotic defiance was stirringly expressed in song.

Above all, as several US critics noted, the stark racial visuals of the film could not help but conjure up the civilisation-versus-barbarism ideals of the 19th century. In the aftermath of an attack repulsed by British volley fire, the camera panned slowly over a twisted mass of dead and dying Zulus to come to rest on Stanley Baker looking nobly troubled by the whole business – the ‘island’ and the ‘sable sea’ reproduced in Technicolor. Zulu certainly became a cultural touchstone for racist rhetoric as part of a language of invasion and white victimhood. In 1976, the neo-Nazi National Front chairman John Tyndall praised it as a film that ‘promoted racial pride and awareness’. The London neighbourhood of Brixton was dubbed ‘Rorke’s Drift’, while the Daily Express described violence at the 1977 Notting Hill carnival as ‘like something out of the film classic’. If commemorating the battle in a London Tube station is open to accusations of insensitivity, this neglected aspect of Zulu’s reception may help to explain why.

Today, Rorke’s Drift is the centre of a cottage industry of history books, documentaries, novels, models and video games. More striking still has been the rediscovery in recent years of ‘Rorke’s Drift men’ like John Fielding or John Jobbins by local councils, in commemorations intended to demonstrate that, in the words of one councillor, ‘it’s not just about the First and Second World Wars’. Is it the battle itself which is being remembered in all this, or its classic cinematic depiction? Other equally desperate battles without film adaptations attract no such attention. On the face of it, Rorke’s Drift seems in little danger of being rewritten or erased from national history. Rather, it serves for some nostalgics as an episode enjoyably told and retold so frequently that it serves as a sanitised synecdoche of Britain’s imperial history. Here is empire as a fair fight between brave men, with respect on both sides and none of the famines, slave plantations or concentration camps that academic historians insist on discussing. Commemorating famous battles will always be an engaging and accessible form of popular history. When such old island stories dominate the popular imagination of empire, however, celebrating fragments of the imperial experience while disregarding their contexts and consequences, an honest reckoning with this past becomes more difficult.