Are All Empires Bad?

Arguments over how we remember the past will not be resolved by simplistic slogans or knocking down statues. 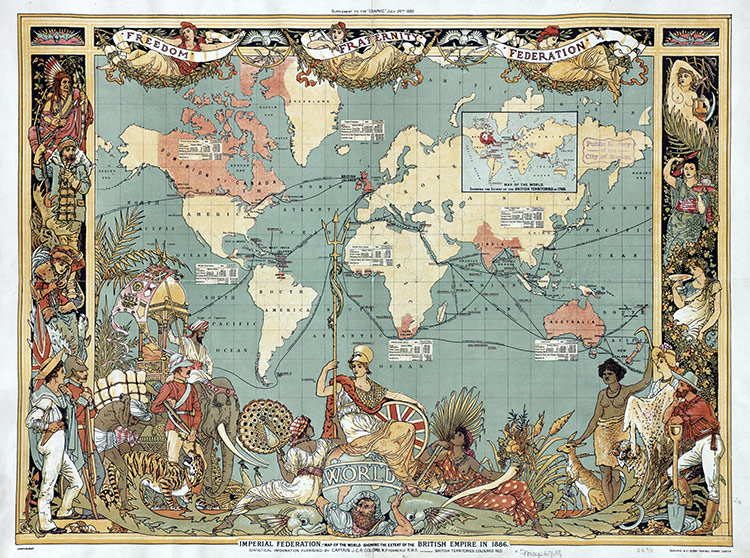 Rhodes must fall. Churchill must fall. Queen Victoria must fall. Are there any statues of Gordon or Kipling still standing? If so, they must fall too. Not, as Alex von Tunzelmann argued recently, because empires rise and fall and all rulers end up like Shelley's Ozymandias, as trunkless legs of stone, but because a vociferous and sanctimonious student movement, with minimal public support, has decreed that they must.

While Oxford students have been trying to eradicate even Rhodes's name from public view, at Jesus College, Cambridge, the students have demanded the return of a looted bronze cockerel to Nigeria. Faced as they are with political corruption, the collapse in oil prices and the ravages of Boko Haram, it is difficult to imagine that the return of a bronze cockerel is high on the Nigerian people's list of priorities, but no doubt it makes the Cambridge students feel better.

Nor does it stop with statues: the movement in Oxford has also called for changes to the supposedly colonialist-centric curriculum, while in the States Harvard has even changed the name of its Master's degree in case anyone thinks it refers to slaveowners. Martin Luther King's dream of a world where the children or former slaves and the children of former slaveowners would put the past behind them and sit down together at the table of brotherhood is decidedly not shared by today's generation of activists.

The spirit of destructive self-righteousness that drives these students is exactly the same as that which drives ISIS and the Taliban to blow up ‘un-Islamic’ statues and sites, or which drove German students in the 1930s to strip their university libraries of books by authors they found offensive. As the murderous example of ISIS shows only too well, from the ideologically-driven destruction of ‘offensive’ historic statues and sites to the burning of books and killing of people is a horribly short step and let no-one imagine it could not happen here. Every country where it has ever happened has thought that.

But while public debate has focused on the meaning of statues and memorials, the activists' view of empire itself has gone unchallenged: Empire is 'bad' and those who made it happen were ‘bad’ too. Would we take this simplistic approach with other periods? Were the Tudors ‘good’ or ‘bad’? Was the Renaissance offensive? Should we apologise for the Industrial Revolution? The absurdity of these questions ought to be obvious, yet that is the level of public debate about the British Empire. Perhaps it is time for a more grown-up debate.

Let us start with a counter-factual. Imagine there had been no Empire, no statues to fall, no slaves to free. How different would the world look today? Counterfactuals are full of imponderables and we can hardly wish away the industrial revolution: Europeans and Americans would certainly still have gone looking for raw materials and markets, which would undoubtedly have involved exploitation of African or Asian rulers and peoples. But there would have been no western investment or building in these regions: why should there be? The one major exception to the imperial pattern, Meiji Japan, only developed as it did with massive western involvement and then only to avoid western take-over; it is difficult to conceive of western countries doing the same for other countries out of some form of altruism. Would an Empire-less past really have resulted in a smaller gap between the developed and the developing world today? The opposite seems much more likely.

Capitalism and technology are both expansionist in their nature, and such expansion always creates dominant cultures. If you really want to complain about imperialism, you might as well wish away Blake's ‘dark satanic mills’ and return, as Gandhi tried to do, to some imagined pre-industrial idyll. Gandhi denounced British technology and called the railway network ‘evil’, but few agreed with him and he himself travelled the length and breadth of India by train.

Interestingly, those who denounce British imperialism seem to take other empires in their stride. Was it more wrong for the Victorians to rule other peoples than it was for the Romans or the Normans to do the same? South Africa still maintains statues to an aggressive expansionist and mass murderer: not Rhodes but Shaka, king of the Zulus (ironically the one statue to him that has been removed, from Durban airport, was deemed insufficiently warlike). Shaka’s supporters say the blood on his hands is acceptable because he was building a nation, but much the same could be said of Rhodes. The argument will not be resolved by simplistic slogans or knocking down statues and returning cockerels but by facing up to the past in all its complexity – yes, and its offensiveness.

Sean Lang is Senior Lecturer in History at Anglia Ruskin University, where he teaches about British imperialism.