Underneath the Arches: Celebrating Borough Market 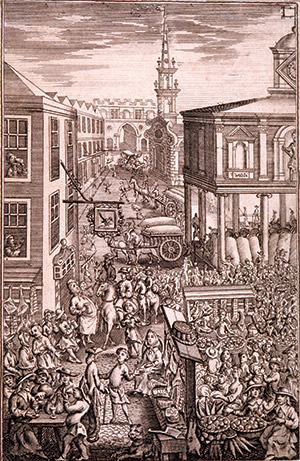 Borough Market in Southwark has a claim to be the oldest of all the capital’s markets still trading on its original site and celebrates its 1,000th anniversary in 2014. By 1276, according to a document of that date, it had become a nuisance by spreading to the south side of London Bridge. The bridge had been rebuilt in stone a century earlier by Henry II and was itself a severe bottleneck, clogged with over a hundred shops and houses whose construction on the bridge had helped pay for it. The bridge was also home to London’s first public latrine.

The proximity of the market, which sold grain, fruit, vegetables, fish and some livestock, accentuated the congestion problem, causing a serious impediment to the commercial life of the City. Almost three centuries passed until Edward VI granted a charter in 1550 conferring the market rights on the Lord Mayor and citizens of the City, who were thereby able to regulate the management of the market and the space it occupied. In 1671 Charles II issued a charter that fixed the limits of the market. This mapped it as extending from the southern end of London Bridge to St Margaret’s Hill, close to the present site of Guy’s Hospital, and to the former home, in today’s Talbot Yard, of the Tabard Inn from where Chaucer’s pilgrims set out for Canterbury.

By 1754 the market had grown in response to the increasing population of London and was proving unmanageable. The continued chaos caused by traffic to and from Borough prompted the City Corporation to petition Parliament to relieve it of the responsibility for its running. The Borough Market Act of 1756, therefore, abolished the ancient market but gave the parish of St Saviour’s Southwark (Southwark Cathedral) the right to set up a market on a new site. A group of Southwark residents raised £6,000 to purchase land known as The Triangle, south of St Saviour’s, which remains at the market’s heart.

The present buildings were designed in 1851 by Henry Rose, who had earlier redesigned the nave of St Saviour’s, with further work in 1863-64 by Edward Habershon. Both architects were chiefly associated with ecclesiastical designs, which accounts for the ‘Gothic’ character of some of the market buildings, particularly the elaborate wrought ironwork. By this time Borough had become one of London’s most important markets. Its position close to the wharves of the Pool of London made it readily accessible to ships unloading their cargoes and it was well placed to supply retail and catering outlets both in the City and in the rapidly developing suburbs of south London.

There was also the expanding railway. Though it would enable easy access to sources of produce from Kent and Sussex, the market did not wish to relinquish any of its precious land for railway tracks and was prevented from doing so by the terms of the 1756 Borough Market Act. An arrangement was made in 1860, therefore, whereby the railway companies were granted a ‘flying’ leasehold enabling them to build a viaduct carrying the permanent way, while the market continued to trade beneath the arches, an arrangement that continues to this day. Every time the railway viaduct is widened compensation must be paid to the 16 market trustees, who are required to live in the vicinity.

The area had become run down by the second half of the 20th century. It then underwent a major revival as the South Bank was developed, beginning with the Royal Festival Hall in 1951 and the relocation of the National Theatre in the 1970s. These were followed by the opening in 1995 of Shakespeare’s Globe, within walking distance. The original Globe was destroyed by fire in 1613 and the present theatre is as faithful a reproduction of the original as fire regulations will permit.

Today over 100 stallholders continue to sell fruit and vegetables at Borough. An Art Deco entrance from Southwark Street was added in 1932 and in 2004 the south portico from Covent Garden’s Floral Hall was installed when the Royal Opera House was redeveloped. The wholesale market operates on weekdays from 2am to 8am and the retail market on Thursdays, Fridays and Saturdays from 9am to 5pm, after which the area’s restaurants and cafes continue to trade. The market has its own quality inspectorate, which operates in partnership with Southwark’s trading standards department.

An excellent view of the topography of the market and surrounding area has recently become possible from the viewing platform of The Shard, Europe’s tallest building.

Stephen Halliday is the author of London’s Markets: from Smithfield to Portobello Road (The History Press, 2014).