The Spoils of Battle

Men took up arms for many reasons during the Hundred Years War. In the wake of new research into soldiers’ lives, Nicholas Gribit reveals how the promise of fortune was as big a draw as any. 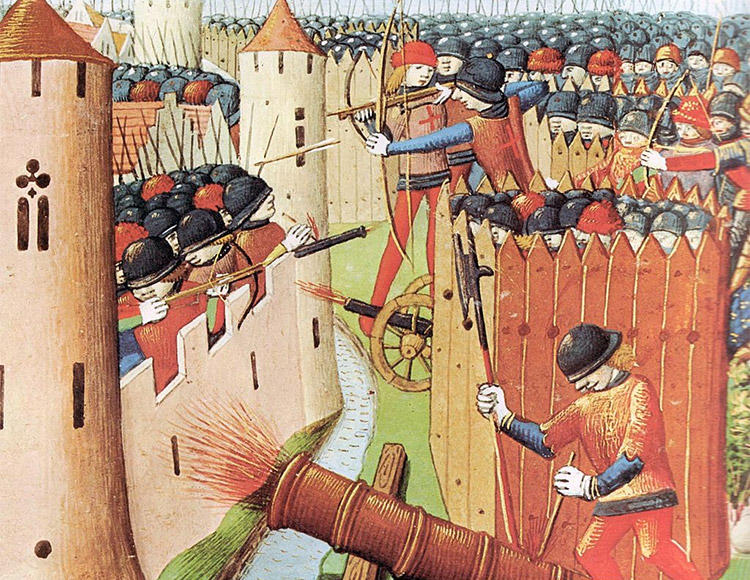 In the March 1992 issue of History Today, Andrew Ayton’s article, War and the English Gentry Under Edward III, analysed the various reasons why men served in English armies during the Hundred Years War (1337-1453). The acquisition of war gains was a strong incentive but, as Ayton points out, it was not always a soldier’s priority. The multitude of causes which compelled men to take up the sword in France and elsewhere included comradeship, kinship, lordship and, for those in need of clemency, a grant of a royal pardon. For some, the sense of adventure offered by overseas campaigns was an adequate incentive in itself. For the English gentry, martial prowess and the enhancement of a military reputation were chief concerns. For younger sons, who stood little chance of attaining a family inheritance, the pursuit of a martial lifestyle in the hope of making their own luck on the battlefield would have seemed an attractive prospect. The aristocracy and gentry were considered the traditional warrior class and, as such, were expected to fulfil their martial role in time of war. For some soldiers, therefore, honour and the sense of noble duty were as important as material gain.

Recent research of an English expedition in Aquitaine (1345-46), led by Henry of Grosmont, Earl of Derby, based on the biographical study of soldiers who were part of the earl’s retinue, reaffirms Ayton’s case. Sir Andrew Luttrell, for example, who belonged to the most famous of knightly clans, demonstrates the diversity of a soldier’s military exper-  ience and motives for fighting. He served in Aquitaine with Grosmont and in a string of other places during a long and colourful career. By fighting in battles, sieges and naval campaigns he fulfilled his martial duty with distinction and built up an inestimable reputation. It is likely that it was for these ends that he first went to war. Alternatively, men who fought on crusade, such as Sir John Grey of Codnor, were probably motivated by religious atonement.

For others, the financial security provided by serving a noble household was reason enough to don their armour. Indeed, the sizeable proportion of men in Grosmont’s retinue, who had either served, or whose kinsman had served the earl’s forbears, shows that precedence and tradition greatly influenced soldier’s decisions.

The prospect of personal enrichment and social advancement, however, remained a potent force in the minds of soldiers. This sentiment could not have resonated more greatly than after Grosmont’s remarkable victories against superior French forces in 1345, first at the town of Bergerac and then at the Battle of Auberoche. The battles yielded unprecedented profits. The 52,000 marks reportedly amassed by the earl at Bergerac were used to build his sumptuous Savoy Palace in London, while the ransoms of prisoners captured at Auberoche fetched £50,000. It was the first time men realised war’s huge potential for financial reward and their first exper- ience of the glory of triumph against the French in an overseas campaign.

Soldiers would also have benefited from the earl’s largesse because, as the chronicler Thomas Walsingham explains (albeit with a degree of exaggeration), ‘when a town was sacked, [Grosmont] took little or nothing for himself’. For a knight who earned around £40 a year and an esquire on half that amount, such profits would have been highly attractive.

It is true, as Ayton notes, that lucrative battles such as Auberoche were a rarity during the Hundred Years War, but the importance of Grosmont’s emphatic victories and the subsequent material gain should not be underestimated. News and tales of the success and spoils of the campaign spread throughout the military community in England, reaching thousands of people and undoubtedly having a profound impact on their attitudes to war. Of the reasons men fought, aspirations of glory and fortune must have been strongest in the mid-1340s after the success in Aquitaine. Indeed, this impetus for recruitment and the renewal of men’s ebullience for war is, perhaps, the most significant aspect of the campaign’s legacy.