Sherlock Holmes and the Beast of Gevaudan

Crispin Andrews finds echoes of one of Sherlock Holmes’ most celebrated mysteries in a tale of 18th-century France. 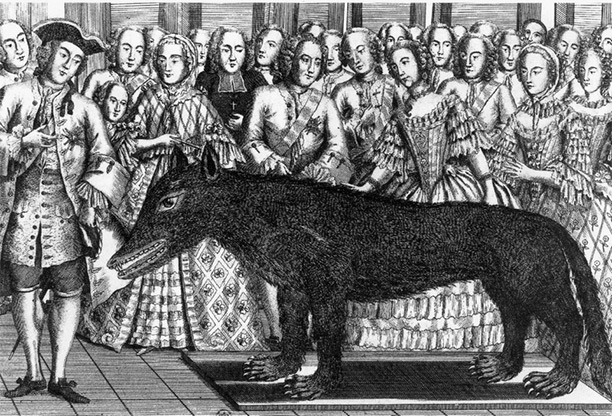 It is 125 years this month since Ward Lock and Co published the first Sherlock Holmes novel, A Study in Scarlet. In 1902, in The Hound of the Baskervilles, Holmes and Watson would meet the villainous Jack Stapleton and the hound he had trained to do away with his rivals on the Baskerville estate.

Centuries-old legends of ghostly black dogs on Dartmoor are said to have inspired Arthur Conan Doyle to write his most famous work. If, however, he had visited France’s Massif Central, he would have discovered a tale not unlike his own. Except that the beast which terrorised the county of Gevaudan in the 1760s was very real and it didn’t just leave footprints behind.

Gevaudan doesn’t exist now. It became part of the new Department of Lozère after the French Revolution of 1789. There, between May 1764 and June 1767, a huge wolf-like creature killed between 80 and 113 people and injured many more. La Bête du Gevaudan (the Beast of Gevaudan), as it became known, preyed almost entirely on women and children living in isolated cottages and hamlets, often as they tended animals or gathered crops in open fields. Men and cattle were not to its liking. Nor, it seemed, were sheep and goats.

Witnesses told how la Bête attacked suddenly, sometimes from above, usually in broad daylight. After the kill it would disappear into the dense patches of forest scattered across the granite plateaus and grass covered hills.

Just like Conan Doyle’s fictional hound, this creature looked like, but was different from and more terrifying than, ordinary dogs or wolves. Eyewitnesses spoke of an animal with a sleek, dark body, strong athletic legs, a long slender tail and a huge head full of powerful teeth. Others recalled an animal with reddish brown fur and a stripe down its back. Some said La Bête remained silent when it attacked; others told of a terrible high pitched cry like a horse neighing. News of its exploits spread quickly, reaching even Louis XVI at Versailles, who commissioned hunters to kill the beast.

La Bête’s identity is a mystery to this day. A hyena escaped from a menagerie? A wild hybrid with the predatory instinct of a wolf but which, like a dog, wasn’t afraid of humans? Or maybe just a big wolf? The biggest on record is, after all, a 79kg monster, almost twice the average size. Some witnesses reported that La Bête could shrug off bullets, proof to superstitious locals that it was a werewolf or an evil spirit sent by God to punish them for their sins. Such stories were more likely started by incompetent huntsmen to excuse their own inability to stop the beast.

In The Hound of the Baskervilles, Holmes discovers that Jack Stapleton had covered a huge mastiff with phosphorous to give it a ghostly glow, half starved it and then set it upon Sir Henry Baskerville’s scent. Some of the evidence from 18th-century Gevaudan suggests that a real-life Jack Stapleton had a hand in the beast killings.

Sometimes La Bête attacked several times in one day or on successive days, often leaving the victim uneaten; more targeted attack animal than hungry predator. Some witnesses said that it wore an armoured hide, perhaps that of a boar – so much for the bullet-proof demon. One surviving victim even claimed the beast walked on two legs; a man wearing a wolf skin, perhaps? Several witnesses saw a man with La Bête.

On September 21st, 1765 François Antoine, a professional wolf hunter, shot and killed a large creature near Chazes Abbey to the delight of locals. Then, in December, another beast attacked and injured two children near la Besseyre Saint Mary. Was it coincidence that a second beast would descend, so soon, upon the same remote corner of France? Or was three months just enough time for someone to import a new animal and train it? Either way, more deaths followed.

A 2009 investigation uncovered a potential culprit, Jean Chastel, the man said to have killed the second beast in June 1767. The investigators wondered, as Sherlock Holmes might have, how Chastel, a farmer, shot La Bête dead when the region’s finest wolf hunters could not. They concluded that La Bête must have been still for sometime, when Chastel shot it. It did not run from, or at, Chastel. Was La Bête tethered? Was this man its keeper?

As for motive, some have suggested that Chastel, or one of his sons, was a serial killer, and La Bête their way of covering up the crimes. Others claim that Chastel’s son had a hyena in his menagerie and a huge red mastiff that sired the monstrous offspring with a female wolf. Chastel was a farmer; convince people that a ravenous beast preyed upon their women and children and they would readily hunt down the real wolves that took a farmer’s sheep and goats.

The body of the animal Chastel shot was taken to Versailles. By the time it reached the king the carcass had rotted and was ordered to be destroyed.
In the decades following La Bête’s reign of terror, old stories about ravenous wolves following little girls around woods became popular again. The story gave werewolf folklore something else, too. Jean Chastel is said to have shot La Bête with a silver bullet, made from a coin that depicted the Virgin Mary.

The Beast of Gevaudan isn’t the only mysterious wolf-like animal to have terrorised European folk. In 1693 one appeared in Benais and between 1809 and 1813 another emerged near Vivarais to claim 20 victims. In 1810 a striped, tawny coloured beast killed 300 sheep in six months in England’s Lake District and between 1875 and 1879 there were beast attacks in L’Indre, France as well as in Limerick, Ireland. A beast with a blunt snout and smooth tail terrorized the Russian village of Trosna in 1893, killing three. Outside Europe there are tales of wolf-like beasts from the Andes, Alaska, Montana, India and Greenland.

As to the identity of these creatures, could a villainous Stapleton-like figure have been behind these attacks, too?

Crispin Andrews is a freelance writer who has written on history and natural history.