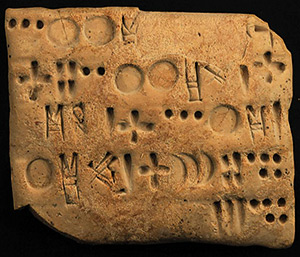 In a room at the Ashmolean Museum in Oxford, high above the fragments of early civilisations that are housed there, a camera dome flashes out light, yielding detailed, high-quality images of ancient written tablets. Thanks to this process of Reflectance Imaging Technology (RTI) our knowledge of the world’s oldest undeciphered writing, known as proto-Elamite and dating to before 3000 BC, is undergoing a transformation. A corpus of over 1,600 clay tablets, originating in Iran but housed mainly in the Louvre, has been analysed using this machine and detailed images published online for all would-be decipherers to examine.

Under the direction of Jacob Dahl of Wolfson College and Oxford’s Oriental Institute the new images have been used to correct earlier work, some of which had conflated proto-Elamite symbols with those in a later and quite different script called Linear Elamite. Neither has been deciphered, and according to Dr Dahl, they have about as much in common with each other as either has with the Shang oracle bones in China. Early attempts at decipherment were also confounded by numerical errors and the sloppy writing of the original tablets, abetted by poor reproduction in modern times that has made it appear that there were no repeats of sign sequences, which is false.

All this will now be corrected and the tablet contents clearly laid out for serious investigation, one aim being to understand the language of the texts. The script itself is conventionally called proto-Elamite because it appears frequently in south-western Iran, where cuneiform tablets from 500 years later are written in a language known as Elamite. This was used for over 2,000 years, starting in about 2500 BC. It eventually became one of the languages written in the Achaemenid Empire of Persia until its conquest by Alexander the Great.

Some linguists believe Elamite to be related to the Dravidian languages of South India, which include Tamil, and an Elamo-Dravidian family stretching from the Gulf to India could include the language of the Harappan civilisation in the Indus Valley. Interestingly enough, proto-Elamite tablets have been discovered at sites far eastwards towards Baluchistan, though a few hundred tablets and fragments have recently been unearthed near Tehran, so it seems the language was probably spoken over a wide area of Iran. Could the tablets represent an early version of Elamite? If so why did the writing rapidly die out? These tablets date to the period around 3200 to 2900 BC, but Dahl believes that those discovered to date represent only a very short period, possibly no more than a few scribal generations. Precise dating is difficult because of uncertainty in carbon dates at around that time, due to a plateau in the carbon curve for that period.

This is the same timeframe for which proto-cuneiform texts have been unearthed at Uruk, a great city on the Euphrates in southern Mesopotamia. Proto-cuneiform, written on clay tablets with a sharp stylus, gradually evolved to become the cuneiform system in which short, sharp strokes could be transcribed more quickly onto wet clay.

Though proto-cuneiform and proto-Elamite are different, they used the same elaborate system of numerical signs and some signs, such as that for sheep, are common to both systems. With present knowledge it is not entirely clear whether the script of south-western Iran came before or after that of Mesopotamia, but what is quite clear is that the Mesopotamian version was the only one with a strong scholarly tradition, some early texts listing signs and official titles that scribes could copy and learn. Another striking difference is that in Mesopotamia human forms such as heads, feet, hands and eyes were used, whereas proto-Elamite has no human forms at all, except signs for male and female genitalia to distinguish male from female workers, but these may well have been borrowed. The apparent taboo against human forms, which does not extend to animals, is curious and not shared by other early writing systems.

With over 1,600 proto-Elamite tablets, some having up to 200 lines, decipherment is a realistic prospect and online publication of excellent images will give it a huge boost. Jacob Dahl believes that some of the signs are being used to indicate syllables, making these the first texts in the world to use a syllabary.

What can the language be? One obvious answer is an early form of Elamite, though Elamite cuneiform used the script developed in Mesopotamia, rather than anything from proto-Elamite. The language of the earliest Mesopotamian texts, dated to archaeological levels Uruk IV and III, also remains unknown, though texts written shortly after 3000 BC are agreed to be in Sumerian, which remained a spoken language until about 2000 BC. So could proto-Elamite be related to Sumerian, but then why not use the system of signs developed at Uruk? It could also be a Semitic language, since these are attested very early: Akkadian in Mesopotamia and Eblaite in Syria were written in the mid-third millennium and both are Semitic. Or could it be a very early form of Indo-European? That would make it by far the earliest written language in that family, predating Hittite by 1,500 years.

Another obvious question is why this writing system failed to develop. Dahl even wonders whether what we have is a later phenomenon because he says, ‘the scribes were not very competent’, and asks whether this is ‘the first example of knowledge lost due to underfunding’.

Certainly it was a remarkable development, with signs written in consecutive lines, unlike early Mesopotamian writing, where signs were enclosed in boxes but without a specific order in each box. In other words proto-Elamite was a linear script, yet it died out, unlike Linear A from second millennium Crete, which turned into Linear B and was used for an early form of Greek. That died out when the Mediterranean world was engulfed by war and destruction in about 1200 BC, but what happened in Elam, in south-western Iran? We have no idea, so any evidence we can gather from these tablets is intriguing and welcome.