A Nation of Regions

Modern Britain is dominated economically, culturally and politically by London, its capital city. It was not always that way, as an examination of medieval texts reveals. 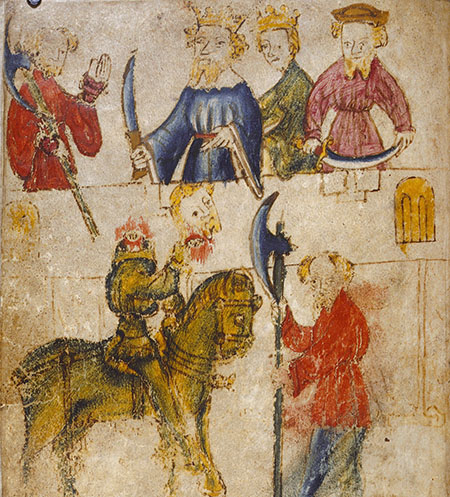 The past year has seen a great deal of discussion in Britain about questions of identity. One particular concern has been the apparent gulf between London and the rest of the country, with a growing perception that a London-based media and political class has become detached from the lives and experiences of many people in other parts of Britain. This is not a new problem: London has dominated cultural life in Britain for centuries, for so long that it is almost assumed to be a natural state of affairs. But, at a time when the relationship between regional and national identity seems especially fraught, it is interesting to think about how different things have sometimes been – and here the medieval period offers some useful contrasts.

One of the things students coming new to medieval history and literature often find surprising and rewarding is the distinctively regional character of much of the source material. It was only towards the end of the Middle Ages that London emerged as a dominant cultural centre. Before that, the earlier medieval period offers a rich and complex picture of regions with their own particular interests and strengths. At various points in the Anglo-Saxon period, we can catch glimpses of different regions at the height of their wealth, power and artistic and literary creativity: Bede’s Northumbria, the Mercia of the dazzling Staffordshire Hoard or Alfred the Great’s Wessex, which fostered new kinds of historical and philosophical writing in English.

These Anglo-Saxon regions were, of course, kingdoms in their own right. But there are plenty of examples, too, from the centuries which followed, even once these regions became part of one nation. Think of the poem Sir Gawain and the Green Knight, written in the 14th century in the north-west Midlands, which imagines its Arthurian hero journeying through a stark but beautiful wintery landscape that is recognisably medieval Cheshire. This poem’s finely wrought literary language, studded with dialect words, would have been unpalatable (perhaps even incomprehensible) to many contemporary audiences in the south, but for the poet and his readers it must have been a powerful evocation of a landscape and language they knew intimately.

My favourite example of medieval regional flourishing is the 13th-century poem Havelok, a romance set in Anglo-Saxon England. The eponymous hero is the orphaned son of the king of Denmark, who has to flee his home after his kingdom is usurped. The boy is saved by a fisherman named Grim and taken to England. They settle down on the coast of Lincolnshire and Grim founds the town of Grimsby, which is named after him. Havelok grows up there and works for his living in Lincoln as an ordinary kitchen-boy, until his extraordinary strength brings him to public attention.  He ends up marrying the daughter of the English king, regaining his kingdom and ruling England and Denmark together in a single, harmonious union.

Havelok is a poem firmly rooted in the land and history of northern Lincolnshire. The poet references local landmarks, which he clearly expected his audience to recognise, and he talks with affection about Lincoln, ‘the good town’. But at the same time the poem is interested in a national story – the story of the union of two nations, England and Denmark – told from this regional perspective. It explores an imagined version of the history of Viking settlement in Britain, which was (and still is) an important factor in shaping the identity of north-east England. For the poet, this is symbolised by the very name Grimsby: Grim and his hard-working Danish family leave a permanent mark on English history through the name of their town.

In the Middle Ages and for long afterwards, this story evidently appealed to regional pride: the medieval seal of Grimsby depicted Grim, Havelok and his English wife, Goldburh, and the story was attached to local landmarks, including a large rock in Grimsby known as ‘Havelok’s stone’. Even today there are businesses in the Grimsby area named for Havelok: something the medieval poet, who well understood the importance of history and names in the formation of local identity, would surely have appreciated. There is something admirable about the way this poem balances its national and regional identities, as if there is no question that the two can be reconciled; the poet is in no doubt that this part of the country, just as much as any other, has a right to have its story told.