Archaeologists and historians are on the same side, despite what journalists say. 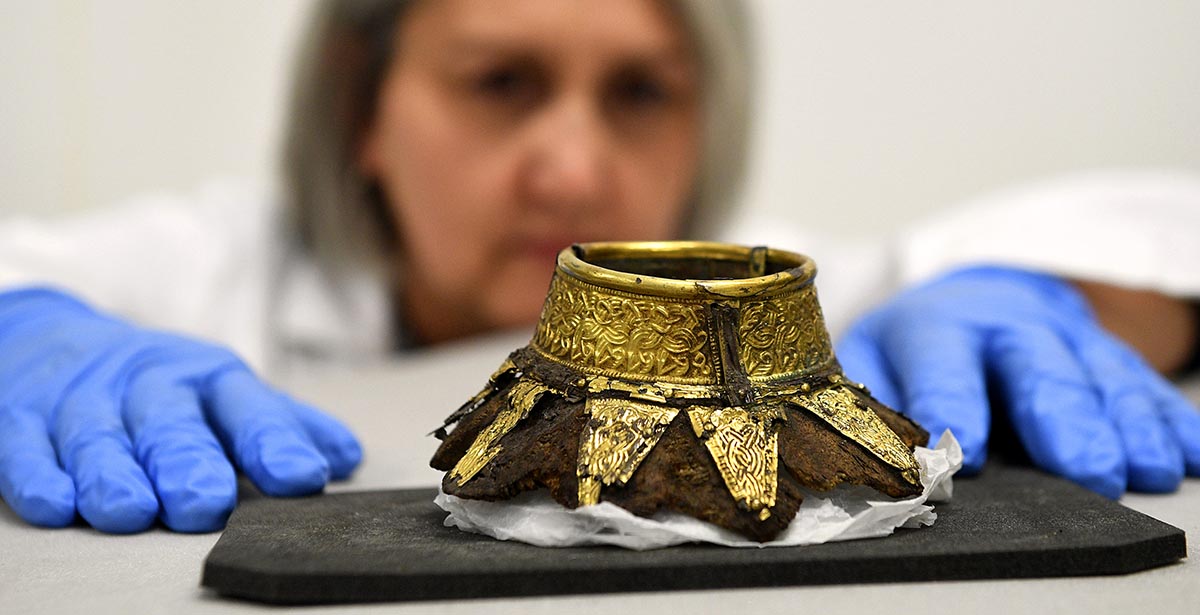 As a medievalist who works mostly with books, I confess that I sometimes envy archaeologists.  The work they do is long, difficult and painstaking, but the reward – at least in terms of public interest and enthusiasm for their findings – is incredible, far surpassing anything most other disciplines can even dream of. In recent months, new analysis of burials from opposite ends of the Anglo-Saxon period has captured the public imagination. First it was the rich grave at Prittlewell in Essex, quickly dubbed ‘Britain’s answer to Tutankhamun’, with its range of exciting finds, including gold crosses which seem to reveal unexpectedly early Christian influence. Soon after this came the news of the possible identification of the bones of Queen Emma in Winchester Cathedral, where they were already believed to lie, though previously unidentified among a mixture of other remains.

Royal bones and buried gold are both irresistible to the media, so it was not surprising that these stories made headlines around the world. Importantly, they were explained and presented by the research teams in an attractive way, which clearly helped journalists and the public appreciate why these finds were significant. Such stories can be a hugely powerful way of enhancing public understanding of the period, not to mention an important tool for defending its study in an academic culture focused on impact.

It is hard to imagine research findings in other, less photogenic fields of medieval history attracting this kind of attention. The enthusiasm such discoveries evoke reminds me of a line from Beowulf which dryly warns that the sight of gold on grunde – gold buried in the ground – ‘can easily overpower any one of the human race’. ‘Treasure’ has a magic of its own to bewitch the imagination, the poet says. I think it would amuse him that the spell seems to work on 21st-century journalists just as well as it did on Anglo-Saxon warriors.

There are downsides, of course, to all that attention, parts of which I do not envy at all: it must be frustrating, for example, having constantly to remind people that there is more to archaeology than royal tombs and ‘buried treasure’. Media excitement about eye-catching objects does not allow much space for context or complexity, so the way these finds are reported often leaves much to be desired. I am always particularly struck by the preference journalists seem to have for setting up archaeological discoveries in a kind of triumphalist battle against written sources. They want these finds to ‘rewrite the history books’, to prove historians wrong. The story pattern they like most is ‘historians thought one thing, but science can now tell us the truth’.

In fact – and this seems almost too obvious to say, but clearly it is not – analysis of such finds complements our understanding of written sources and vice versa. Contrary to the popular media narrative, we do not throw out our written sources just because something has been found which conflicts with their evidence. Some headlines about the Prittlewell burial, for instance, focusing on the presence of crosses, proclaimed that it proves ‘Bede was wrong’ in his account of the early days of Anglo-Saxon Christianity. If it does, it is not in a way that would surprise any historian who has studied Bede. New information about the period proves his version of events to be exactly what historians have always known it to be: a complex narrative with a sophisticated political and theological agenda, informed by an understanding of history which is profoundly different from modern interpretations of the discipline. To decode the information provided by such texts requires an appreciation of their purpose and genre, the ability to decipher a web of biblical and historical allusions and specialised linguistic, palaeographical and cultural knowledge.

Perhaps that all sounds rather dull compared with a shiny picture of gold in the ground. But our understanding of the period is best served by appreciating both kinds of evidence together, not expecting one to simply discredit the other. It may be that, when these stories hit the headlines and written history is set up as a straw man for science to prove or disprove, we need to do a better job of explaining how our sources work and the specialist expertise historians have to offer. Journalists, like Beowulf’s warriors, may get overpowered by the sight of gold but, fortunately, archaeologists and historians are on the same side here – a little envy notwithstanding – and can take a more considered view.