The Death of Mahatma Gandhi

Gandhi was shot on 30 January 1948 by the Hindu fanatic Nathuram Godse.

The Fall of Calais

Report by H.F. Ito a Japanese born close to Hiroshima In 1942, now living in France, on a conference held in December 2007 in Nanjing to commemorate the massacre of Chinese citizens by Japanese troops in December 1937.

Mark Bryant looks at the cartoons published in imperial Japan during the Second World War.

Burma became independent in 1948. Ben Morris asks if Britain could have done more for this unhappy country.

Rosalind Crone introduces a database of readers and reading habits since 1450.

Gordon Brown’s promised written constitution – if it happens – won’t be the first in British history, as Patrick Little reminds us.

Peter Furtado finds out how hundreds of local historical initiatives are changing the political and cultural climate of Northern Ireland.

The US and the Unintended Consequences of War

The United States’ participation in military conflict has had unexpected results, and often has produced very different political outcomes to those originally intended.

Travel to the Past: Ekaterinburg

Helen Rappaport visits the town on the Russian-Siberian border that has become a focus for Romanov pilgrimage.

Suzanne Bardgett, director of the Holocaust Exhibition at the Imperial War Museum, reports on this ambitious new facility which opened in October. 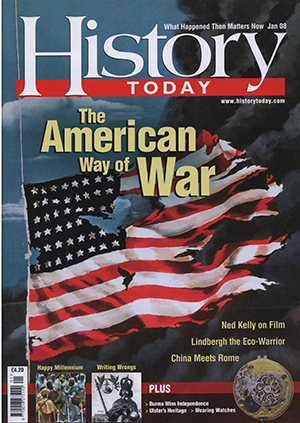