The world’s demagogues offer simple solutions and a strong hand. Trump’s victory in 2016 was a reminder of this. 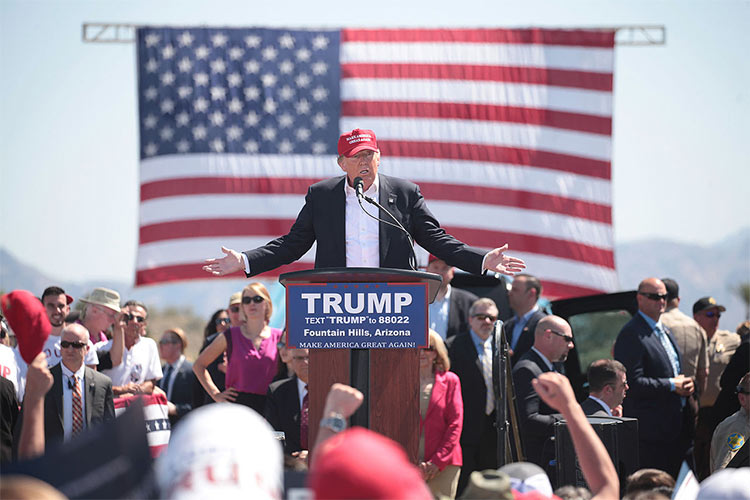 In the wake of the fall of the Berlin Wall, 27 years ago to the day, as authoritarian regimes across the former Soviet bloc collapsed, political scientist Samuel Huntington published a remarkable, though largely forgotten, book, The Third Wave. Huntington argued that the modern world had seen moments of liberalisation and democratisation. Following a ‘first wave’ in the ‘long’ 19th century (1789-1914), which resulted in the emergence of democratic institutions in more than 30 countries, and a ‘second wave’, which followed the Allied victory in the Second World War, the ‘third wave’ had begun with the fall of authoritarian regimes since the mid-1970s and had gained new force with the collapse of the Soviet Union and its satellites.

The current global wave of anti-liberal populism suggests that this ‘third wave’ might come to a halt and that it might even reverse. This is a moment of demagogues, marked by the rise of Recep Tayyip Erdoğan in Turkey, Viktor Orbán in Hungary, Jarosław Kaczyński in Poland, Prayut Chan-o-Cha in Thailand – and now Donald Trump in the United States. Their movements have much in common: the centrality of a strongman, nationalism, xenophobia and hatred of migrants and minorities, anti-intellectualism, anti-establishment posturing, contempt for the free press, economic isolationism and hostility towards the liberal world order and international organisations.

Throughout modern history, anti-liberal governments have been the norm, not the exception. The most profound authoritarian moment in modern global history was the crisis of liberalism in the interwar years, which gave rise to the likes of Atatürk, Franco, Salazar, Mussolini, Chiang Kai-shek, Hitler and Stalin. Yet this triumph of authoritarianism, as historian Mark Mazower has shown, was not seen as inevitable after the First World War. Indeed, some observers in the early interwar years were convinced that liberalism had prevailed; in 1921 the intellectual James Bryce proclaimed ‘the universal acceptance of democracy as the normal and natural form of government’. He was soon proven wrong.

As liberal democracies descended into crisis, one country after another shifted towards authoritarianism. Even in the remaining liberal societies – in Britain, France or the United States – authoritarian models seemed, to many, to represent the future. Winston Churchill congratulated Mussolini on his ascendancy to power (although he thought fascism unsuitable for the British people). ‘If I had been an Italian’, he said in 1927, ‘I am sure I should have been wholeheartedly with you from the start to the finish in your triumphant struggle.’ ‘Benevolent despotism’, wrote George Kennan, a bright, young diplomat stationed in interwar Eastern Europe, ‘had greater possibilities for good’ than liberal democracy. He recommended that the US should walk down ‘the road which leads through constitutional change to the authoritarian state’. In the end, the interwar authoritarian moment, which had seemed so promising to many as a force of stability, resulted in the greatest tragedy of human history.

The Second World War was followed by a brief period of global liberalisation, with the end of authoritarian rule in countries like West Germany, Italy, Austria and Japan. But the postwar era was by no means an age of unequivocal freedom. Many parts of the world remained ruled by authoritarian strongmen – not just in the Soviet bloc but also in the anti-communist ‘free world’, from Pahlavi Iran to Pinochet’s Chile.

Another wave of authoritarianism, albeit smaller than the great crisis of the interwar years, rocked the world in the 1960s. It was the decade of military coups d’états, with illiberal juntas taking over in places as far apart as South Korea, Indonesia, Greece and Nigeria. Latin America was particularly vulnerable and there authoritarian states multiplied, including countries with a long democratic history. Many observers became pessimistic about the liberal model in general. And as before, this moment took many contemporaries by surprise.

A turning point came in the 1970s and 1980s, when no fewer than 30 authoritarian regimes across southern Europe – Portugal, Spain, Greece – Latin America and Asia fell. Societies became more open. This was the time when Huntington sat down to write The Third Wave.

When, at the end of the Cold War, one communist regime after the other collapsed, the autocratic model seemed irreversibly weakened. Many observers have grown convinced that the remaining bloc of autocratic regimes, such as those in Moscow, Beijing and Riyadh, are contained by a stronger block of liberal democracies. Some, such as Francis Fukuyama (similar to James Bryce in the early 1920s), have even argued that in the long run these authoritarian states would slowly liberalise. Now we see that the opposite might be the case. Not only have the remaining autocratic regimes not fallen, but now even our own liberal societies are challenged by anti-liberal movements from within.

History does not follow a teleological path. There is no straight road towards freedom. Far too often, observers, from Bryce to Fukuyama, have proclaimed the triumph of liberalism and again and again they have been proven wrong. The threat of authoritarianism has remained persistent and it is now resurging.

To be sure, the forms of authoritarian anti-liberalism that emerged in the past and today could differ considerably. Unlike most of their predecessors, many of today’s demagogues use the rhetoric of democracy, priding themselves on their mass-support base. Yet they also have much in common with earlier manifestations of authoritarianism. Then and now it is centred on charismatic leaders. Then and now, they promote nationalism over internationalism, security over freedom, emotion over reason. Then and now, they invoke not only external but also internal enemies, blaming minorities – the weakest of society – for their problems. Then and now, once in power, they waste no time in undermining their countries’ political freedom and civil liberties; they censor the media to manipulate public opinion, establish client-patron relationships to control broad segments of society and suppress their political enemies. And then and now, their triumph comes as a surprise to many.

The reasons for the current resurgence of anti-liberal populism are diverse. Around the world, radical politicians are benefiting from social and political instability. It is social inequality, economic crisis, concerns about social, demographic and cultural change and anxiety about the complexity of the modern world which are driving people to anti-liberal solutions. The world’s demagogues play with their fears, offering simple solutions, scapegoats and a strong hand. Trump’s victory has been the latest reminder of this.

History has shown that we should never take our liberal social and political order for granted. We should always remember how fragile our open societies are. We are in a permanent struggle to defend them.

David Motadel is an Assistant Professor of International History at the London School of Economics.