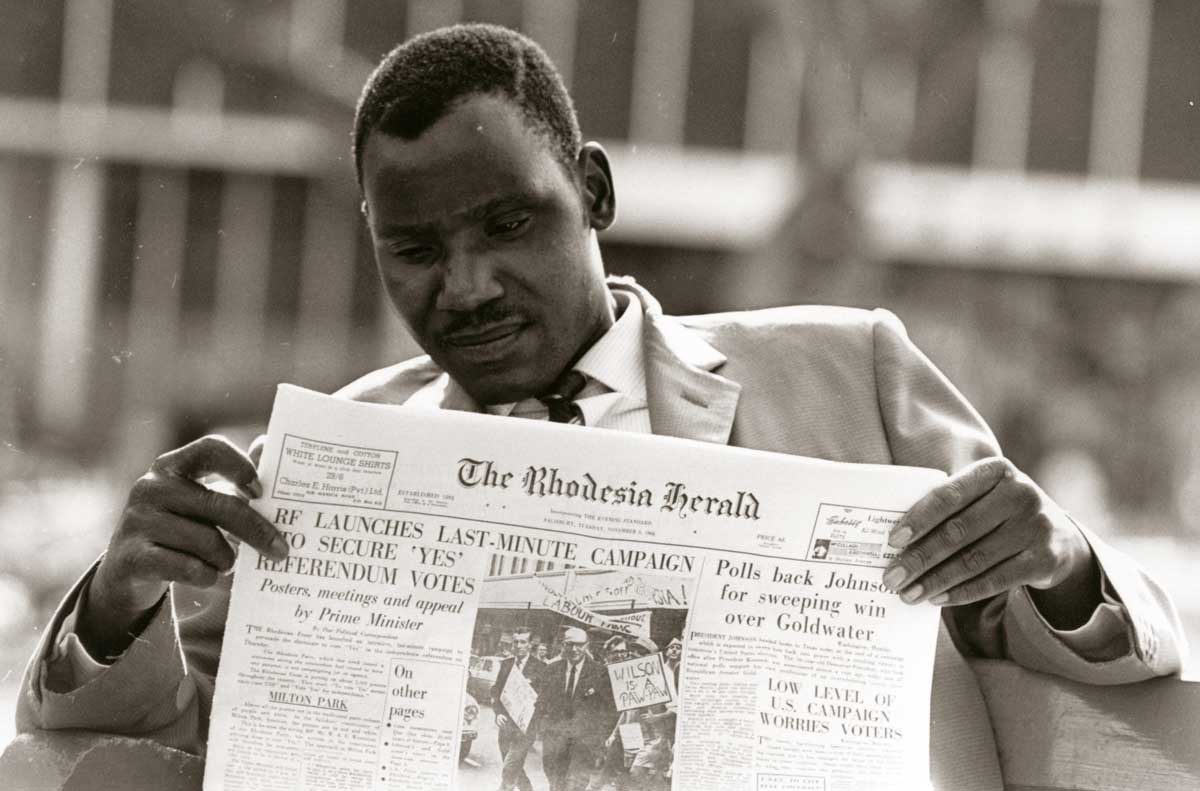 The experience of Rhodesia, the former white power settler state, appears newly relevant as a surge of global isolationism and nativism undermines liberal norms. Dylan Roof, the perpetrator of the 2015 massacre at a historic black church in South Carolina, wore a jacket bearing the Rhodesian flag. Donald Trump’s ‘America First’ rhetoric finds historic precedent in the ‘Rhodesia First’ motto espoused by right-wing whites in that colony in the 1950s.

Fifty-five years ago this November, Rhodesia proclaimed a Unilateral Declaration of Independence (UDI) from British rule. The dramatic manoeuvre was loaded with symbolism to enhance its legitimacy. The announcement came at 11am on 11 November, the anniversary of the cessation of hostilities of the First World War. The declaration’s opening mirrored the American Declaration of Independence in its syntax and content.

The 1965 rebellion is often perceived as the result of machinations that emerged after Ian Smith – notorious for his racist claim backing ‘1,000 years’ of white rule – became the colony’s prime minister the previous year. However, Rhodesia’s descent to a unilateralist pariah state percolated alongside African decolonisation and the emergence of a revamped global system in the aftermath of the Second World War.

In his independence address, Smith announced: There will be no happiness in this country, while the absurd situation continues to exist where people such as ourselves, who have ruled ourselves with an impressive record for over 40 years, are denied what is freely granted to other countries, who have ruled themselves in some cases for no longer than a year. White Rhodesians were unnerved by the governance changes that gathered pace as the imperial infrastructure crumbled following the War. UDI was the culmination of their inability to accept the global transformation of the postwar era and the rapid success of anti-colonial nationalism.

As European empires crumbled, the impact reverberated in Rhodesia. A number of UDI-era politicians settled in the colony in the 1940s via Asia, fleeing the initial postwar wave of decolonisation. The most notable was William Harper, an immigrant from India who entered parliament in 1958. A one-time leader of the Dominion Party, a predecessor of Smith’s Rhodesian Front, Harper became an ardent promulgator of the ‘Rhodesia First’ mantra.

While the fall of colonialism in Asia stirred white Rhodesia’s unease about their own dominant role, the ruling minority was particularly disquieted when changes emerged elsewhere in Africa. In an attempt to preserve their position and create a security buffer, Southern Rhodesia federated with Northern Rhodesia (Zambia) and Nyasaland (Malawi) in 1953. The demise of the Federation of Rhodesia and Nyasaland in 1963 and the independence of Malawi and Zambia the next year provided significant impetus for Rhodesia’s push for sovereignty.

As anti-colonial revolt flared, in territories such as Kenya and Algeria, white anxieties surged. As early as 1950, Rhodesia’s legislature deliberated an independence motion. The mover, Ray Stockil, concerned by constitutional changes in East Africa, noted that ‘events in one territory affect conditions in any other part of Africa’.

Although the administration at the time was close to Britain, strains were emerging. In 1956, against the backdrop of the Suez Crisis, the Federal Prime Minister Godfrey Huggins declared: We have complete control of our own Defence Force. I only hope we shall not have to use it as the North American colonies had to use theirs, because we are dealing with a stupid Government in the United Kingdom.

Another major continental influence was the chaos following the independence of the Belgian Congo in 1960. Rhodesia’s white political class debated the ‘lessons of the Congo’ ad nauseam, but the predominant view was that there was more danger in removing segregationist practices too fast rather than too slowly. This calculation set whites on the obstinate path to UDI and blacks towards the embrace of armed revolution.

Whitehead’s administration split between ‘moderate’ and ‘hard-line’ wings. He often seemed to favour the former, pushing for the integration of the colony’s elite hotels and indicating that he anticipated black majority rule within 15 years. However, recurring bans of the major nationalist parties and the prolonged detention of black politicians marked major concessions to his party’s more reactionary members.

In July 1961, Whitehead’s reform agenda climaxed, following a constitutional referendum that approved limited black parliamentary representation for the first time. It was an empty achievement. The nationalists rejected it as the constitution did not institute universal suffrage; the right-wing settler opposition believed the concessions went too far.

In late 1962, Whitehead’s divided administration was voted out of power. Smith’s Rhodesian Front scored a decisive victory in the white parliamentary seats, propelled by campaign pledges of ‘no forced integration’ and ‘freedom with responsibility’. The UDI trajectory was set.

As the prevailing global order faces a new wave of instability, Rhodesia’s decision to double down on insularity and reject the new discourse of equality and rights highlights the backlash that emerges as societies confront a ‘new normal’.

Brooks Marmon is a postdoctoral fellow at the Department of Historical and Heritage Studies, University of Pretoria.